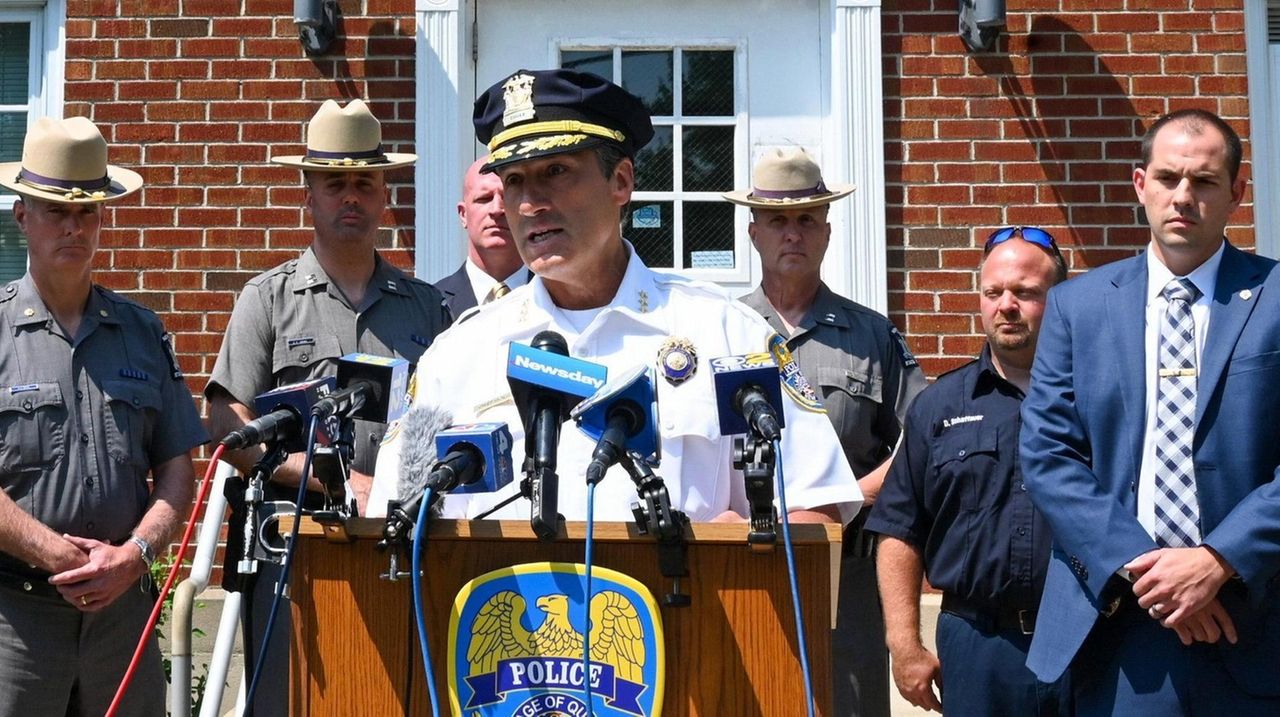 A police officer tried to stop a speeding motorist moments before the man's sedan collided head-on with another car Saturday night in Quogue, killing five people, including both drivers.

But by the time the officer, who has not been identified, turned around, Isola said, Mendez's Nissan Maxima was out of sight. The Maxima crossed the centerline at 11:15 p.m. near Quogue Street and plowed into the front end of an eastbound Uber driver's Toyota Prius carrying four passengers.

The cop first noticed Mendez as he entered into a sharp turn about 1,000 feet into Quogue Village, Isola said. The speed limit at a curve near the crash site is a "suggested" 30 mph, Isola said.

"It was a very brief view of the vehicle," Isola said at a news conference Tuesday at the Quogue Village Police Department. "The officer very briefly loses sight and never catches up to him."

"We will exhaust all avenues to determine how this accident occurred," said Isola, adding that it remained unclear whether Mendez knew the police officer had signaled him to pulled over.

Before the crash, Mendez had turned off his lights, a witness told police, although they could not verify that account.

Authorities found an undisclosed quantity of marijuana in the Maxima's passenger compartment. It is not clear if Mendez was under the influence while driving.

The Suffolk County Medical Examiner's Office said when the toxicology report is completed it will not be released to the public.

There is no criminal investigation because Mendez died in the crash, police said.

Quogue Mayor Peter Sartorius said the village is "devastated." He described the collision as a "tragic accident."

"Our trauma, of course, does not compare with the grief of the families of the five victims who were killed in the accident are experiencing, and the family of the one woman who is still in critical condition in the hospital," he said. "… We are grieving with them."

The curved section of Montauk Highway near the crash site, where the speed limit is 40, is not well lit. But Isola said the curve is no more dangerous or problematic than other areas in the village.

"It’s not a hot spot," he said, before adding that two people died in a 1997 crash at the intersection.

But, the chief said, "any time there is an accident, we look at causation and see if there is something we can do better."

The Suffolk public works department is conducting a traffic study of the portion of Montauk Highway where the accident occurred, county officials said.

At the crash site Tuesday, broken glass, car parts and a windshield wiper remained strewed about the scene. Mourners placed flowers and prayer candles at the site, with one note reading: "To all the victims and their families."

Nearby, the name "Justin" was spelled out in small stones adorned with two wooden crosses.

In an interview on Monday, Mendez's father, Octavio Perez, said he was seeking solace in prayer.

"I wish we could turn back the hands of time," Perez said. "I even prayed that it was me that died. Nothing can ever replace what we lost. I am praying for [the other families] as I pray for myself and my family."

Perez said his son, who lived with him in Shirley, was attentive on the road, even more so after a close friend of Mendez died two weeks ago in a car crash.

"I know my son. He would not be in the wrong lane unless he was trying to avoid something in the road," said Perez, who declined to provide additional comments after the police news conference.

"My son is not a reckless driver," he said Monday.

On the night he died, Mendez was at his girlfriend's house doing laundry, his father said. Mendez went out for a few minutes, according to Perez, and when he hadn't returned, his girlfriend pinged his phone. She saw that his Maxima had stopped moving and immediately drove to the crash site, Perez said.

A GoFundMe account to help pay for the costs of Mendez's funeral raised nearly $3,000 on Tuesday while another for Zahid has raised close to $2,500.

The crash has had cascading effects, devastating four other families.

Zahid's widow, Hifsa Ahmad, told Newsday Monday that she is at a loss to explain to her three young children, ages 16 months to 6 years old, that their father was never returning home.

"The kids have been asking me since yesterday when their father is coming," Ahmad, 26, said. "Why is he still at work? Why isn’t he coming? They really don’t understand."

Zahid and Ahmad were both born in Pakistan, where they married seven years ago. Ahmad moved to Long Island, where her family lives, 13 years ago. She brought her husband to the United States five years ago and they eventually carved out a life in Bay Shore.

Ahmad stayed home to raise their children — son Ayan, 6, daughter Mishal, 3, and son Ahaan, 16 months — while preparing to open a beauty parlor in the hamlet next month.

James Farrell and Kiess were classmates from elementary school to high school and played lacrosse together. Michael Farrell also played lacrosse for Manhasset. He graduated in 2019 and went to Villanova University.

Ryan Kiess, who worked at the accounting firm KPMG, and Maglio, a nurse at NewYork-Presbyterian Hospital in Manhattan, had been dating for six years.

Grieving wife's dilemma: How to tell her children their dad is goneSince the head-on crash that killed her husband and four others, Hifsa Ahmad, of Bay Shore, said she's been peppered with questions from the couple's children about his whereabouts, and she is still searching for the right answer.  Speed probed as factor in head-on Quogue crash that killed 5Both drivers died, as well as three former Manhasset lacrosse players — two of them brothers — in the collision on Montauk Highway. A sixth person was critically injured.