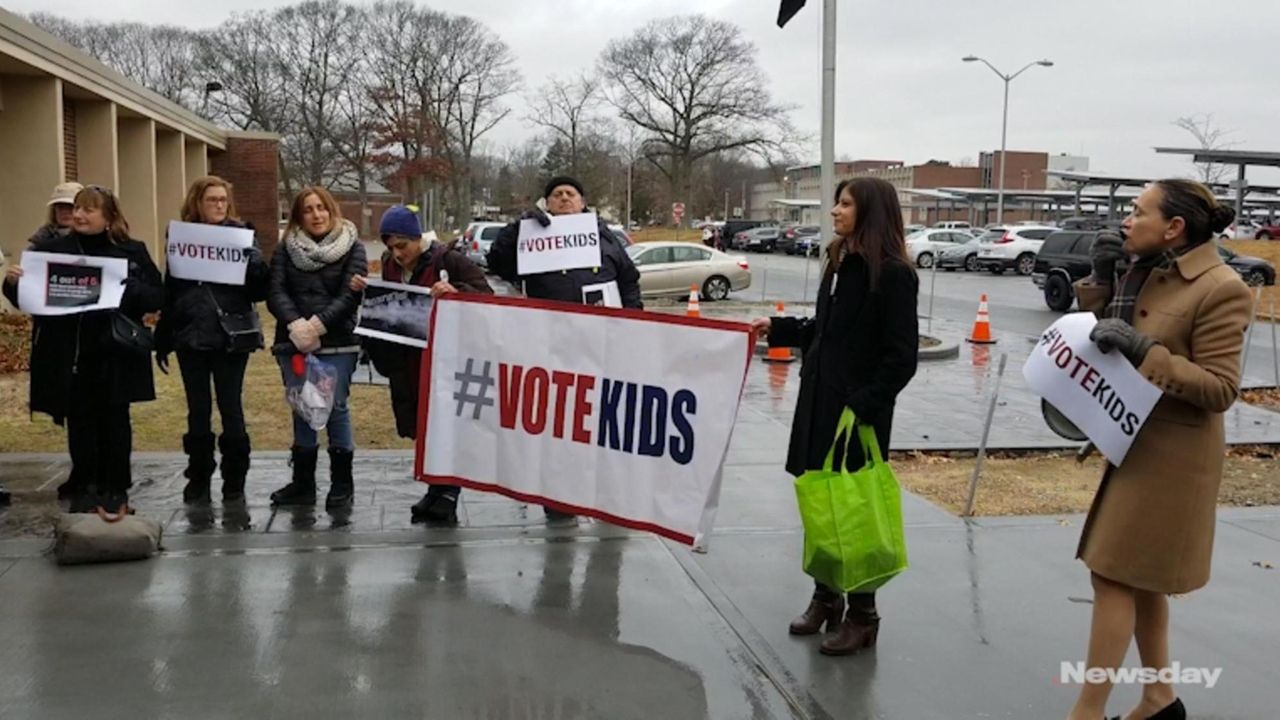 The new legislation would ban the sale of flavored e-cigarettes and flavored liquid nicotine with the exception of tobacco, menthol and mint flavoring in Suffolk County. The proposal is before the legislature's Health Committee, which tabled the measure after meeting for about five hours on Thursday.

"This is a public health emergency, " said Legis. William Spencer (D-Centerport), a physician and the bill's sponsor.  "We are seeing the astonishing increase in vaping among those ages 12 to 17, and to wait for the FDA or state to take action is not acceptable at the expense of more children becoming addicted."

However, several opponents of the proposal — including several business owners and retailers — also rallied in Hauppauge, saying that the flavors actually help smokers quit combustible cigarettes.

Nicholas Blanda, 50, of Holbrook, was addicted to cigarettes until switching to the electronic cigarettes four years ago. Like others against the proposed bill, he wore a button that read “Flavors Save Lives.” Blanda has a host of medical issues, including the loss of his right lung from smoking and holes in his left lung.

"Vaping saved my life," he said. "I was smoking for 36 years and the day I started vaping I was off cigarettes."

However, at a news conference Thursday, Spencer showed two boxes of recently purchased flavored nicotine — one labeled cinnaroo and the other cotton candy.  He said recent data indicated that the number of kids using liquid nicotine grew by 80 percent and they cited flavor as one reason children made the move.

"The kids don't have a chance," Spencer said, adding his proposal has the support of several health experts and educational groups, including the Suffolk Region PTA.

Supporters of the proposal chanted "Kids Before Profits" before the hearing.

Dr. Eve Meltzer-Krief, a Huntington pediatrician who is on the legislative advocacy committee of the American Academy of Pediatrics, joined the rally Thursday. Children who use e-cigarettes are more likely to smoke combustible cigarettes, she said, and face a lifelong addiction to nicotine. Vaping exposes them to harmful chemicals, she added.

"They are not safe," she said.

This is not the first Long Island legislation targeting e-cigarettes. In May, Nassau County lawmakers approved a bill requiring retailers to keep e-cigarettes and other vaping products behind the counter in an effort to discourage young people from using the products. Lawmakers in both Suffolk and Nassau counties have enacted legislation restricting sale of the devices to those under 21.

Gov. Andrew M. Cuomo in July 2017 signed into law a bill immediately banning e-cigarettes in buildings and outdoor grounds of schools from preschool through high school.

E-cigarettes allow inhalation of an aerosol that usually contains nicotine, flavorings and other chemicals. Although the battery-operated devices may resemble traditional tobacco cigarettes or cigars, many look like such items as pens or USB flash drives.

Consumer Advocates for Smoke-free Alternatives Association, a nonprofit based in Plattsburgh, has posted on its website opposition to the bill.

"People who smoke need to see that smoke-free alternatives such as flavored e-cigarettes can be an enjoyable, safer alternative to continuing to smoke,"  Alex Clark, the group's chief executive officer, said in a statement Thursday.

Correction: Legis. William Spencer (D-Centerport), is a physician and the sponsor of a proposed bill to limit flavored e-cigarettes in Suffolk County. An earlier version of this story had the wrong name.