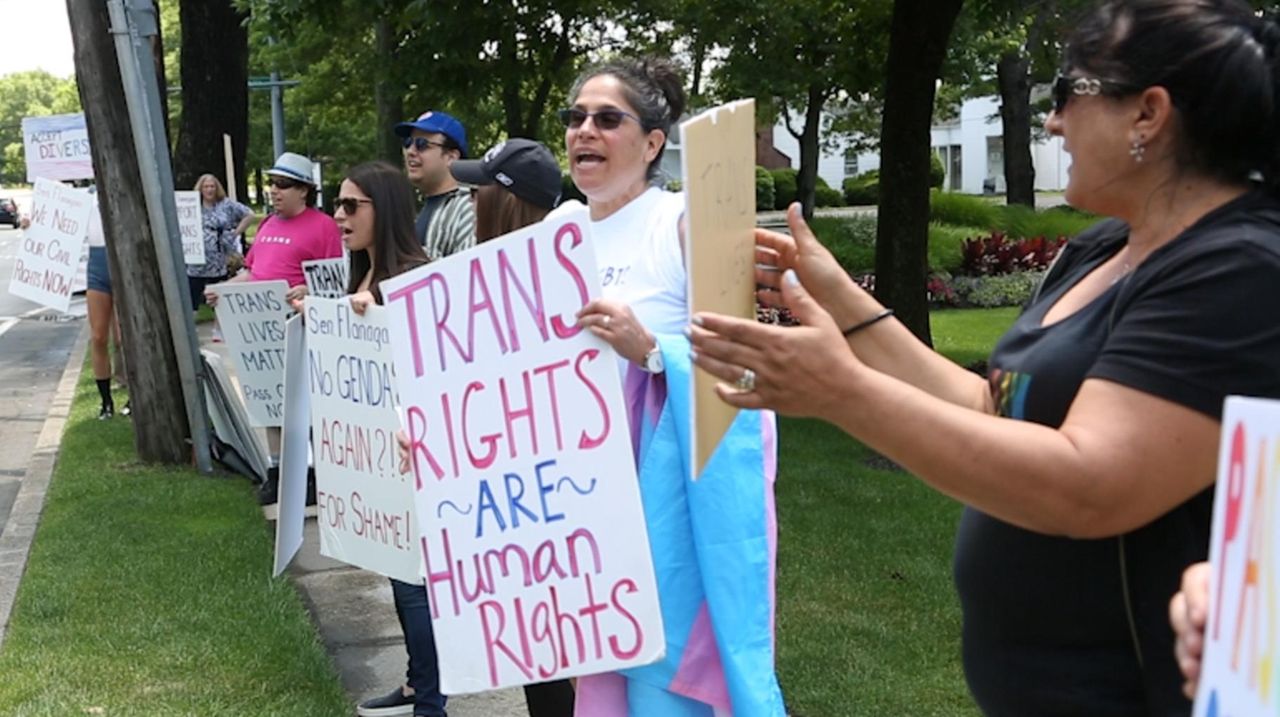 About 15 people rallied for transgender civil rights in front of state Senate Majority Leader John J. Flanagan's Smithtown office on Saturday, June 24, 2017. Organizers said they wanted to call attention to the failure of the State Senate to bring GENDA, the Gender Expression Non-Discrimination Act, to a vote. Credit: Joe Sullivan

Organizers said they wanted to call attention to the failure of the State Senate to bring GENDA, the Gender Expression Non-Discrimination Act, to a vote.

“We need to send a message to Senator Flanagan. As Senate majority leader he has the ability to pull that bill wherever it is and bring it to the floor for a vote if he truly wants to make it happen,” said Juli Grey-Owens, a transgender community activist who organized the event.

Flanagan’s office did not return calls, texts or emails for comment.

Grey-Owens said her group, the Long Island Transgender Advocacy Coalition, is a not-for-profit social justice organization dedicated to advancing the equality of transgender people through advocacy, teaching and empowerment.

No explicit state protections are now in place to protect the transgender community from discrimination in employment, housing and public services, Grey-Owens said. Transgender and gender nonconforming New Yorkers are not a protected class in state human rights law, she said.

Last year an executive order by Gov. Andrew M. Cuomo went into effect that interprets existing protections against discrimination on the basis of sex and disability to include gender identity, transgender status and gender dysphoria.

In March the Assembly passed the GENDA bill for the 10th year in a row. But it has stalled in the Republican-dominated State Senate since it was first introduced in 2003.

Suffolk County has a human rights law that includes protections for transgender people, but Nassau County does not, Grey-Owens said.

“In the transgender community you are protected in Suffolk, but not in Nassau, as you cross the line into New York City you are again protected all the way through Westchester, then as you go upstate there are a lot of counties where you are not protected,” she said.

“Right now transgender people don’t have civil rights across the state,” she said. “All we want is for the bill to be put on the floor; we think we have enough votes to get it to pass. Assuming that Flanagan would put it on the floor and say ‘vote with your conscience not the party line.’ ”

Brookhaven white-collar workers' union to seek mediation for contract
Feds: LI therapists among 9 in $3.3M government scam
College enrollment down 6.6% over two years
All 18 seats in Suffolk Legislature up for election
Police: DNA analysis to be performed on Brian Laundrie's remains
Manhasset district says hackers stole sensitive information
Didn’t find what you were looking for?