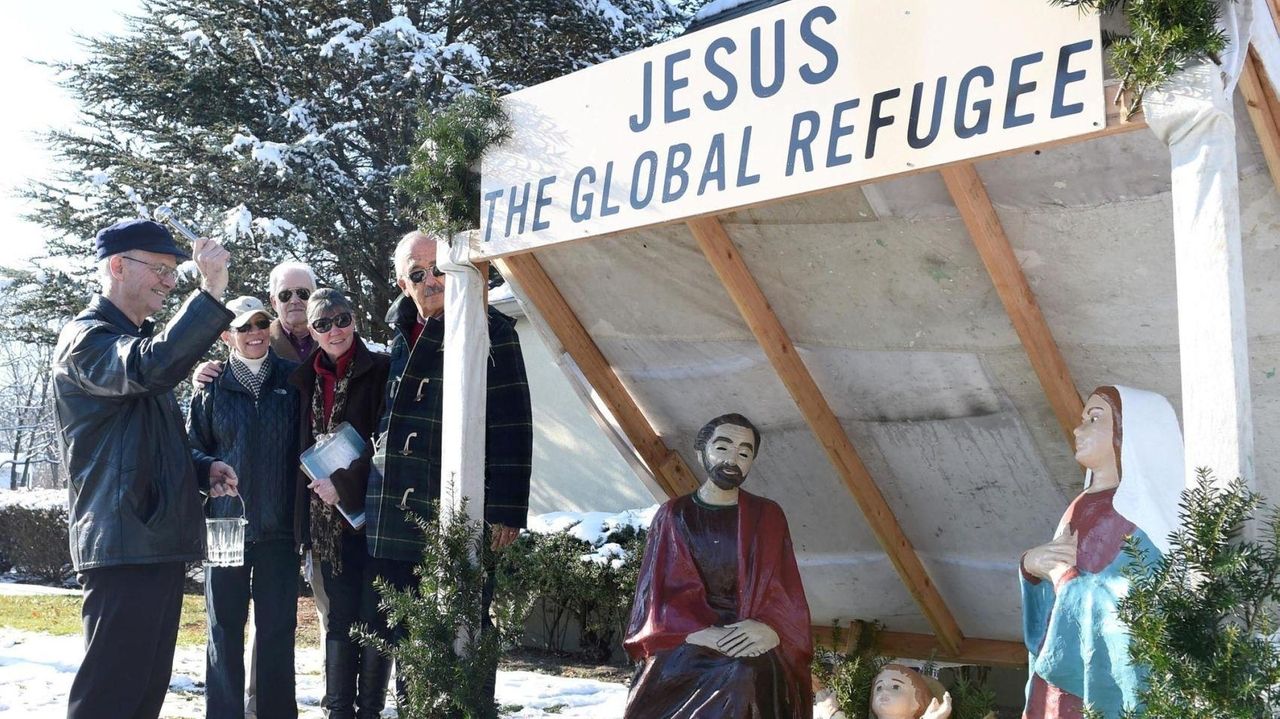 Parishioners helped dedicate a nativity scene and crèche titled "Jesus the Global Refugee" outside Our Lady of the Miraculous Medal Church in Wyandanch on Sunday, Dec. 10, 2017. They urged compassion for anyone forced to flee their homeland because of persecution, war or violence. Credit: Newsday / Valerie Bauman

About 20 parishioners gathered Sunday outside Our Lady of the Miraculous Medal Church in Wyandanch to dedicate a nativity scene and crèche titled “Jesus the Global Refugee.”

“We need to understand, to be sensitive to the reality of refugees because Jesus himself was a refugee,” the Rev. William Brisotti said after the ceremony. “As we’re anticipating remembrance of the birth of Christ, Christmas . . . it’s good to hold in mind the people who are refugees today, fleeing violence, seeking safety.”

In a short ceremony, Brisotti read from the Gospels about the flight of Jesus, Mary and Joseph into Egypt to escape King Herod, who was seeking to kill Jesus.

Church officials and parishioners recited prayers around the ceramic figure of baby Jesus, nestled in the manger between figures of Mary and Joseph.

“Today we wanted to relate Jesus and Mary and Joseph’s flight to . . . the plight of refugees now who are here in the United States seeking sanctuary,” said Sandra Thomas, a parishioner from Wheatley Heights. “We’re sensitive to their needs. We feel that God hears the cry of the poor.”

Richard Koubek, a parishioner and community outreach coordinator for Long Island Jobs with Justice, a workers’ rights group, also spoke during the ceremony. He called for compassion for refugees and urged people to consider that a refugee is anyone forced to flee their homeland due to persecution, war or violence.

He said that definition includes many people currently living in the United States, including Long Island, who have traveled from Latin America seeking a safer life.

“The majority have fled drug wars and civil wars and unstable governments in northern Mexico, in Honduras, El Salvador and Guatemala, going back to the 1980s,” Koubek said. “The refugees fleeing this violence enter the United States without legal papers because they simply cannot get them due to our broken immigration laws. The vast majority of them are law-abiding citizens who contribute billions of dollars to the American economy.”

Koubek, of Dix Hills, said Long Island Jobs for Justice is organizing with religious communities across Long Island in the hopes of establishing religious sanctuaries for immigrants.

“There are many good people right here on Long Island who are supporting undocumented immigrants facing unjust arrest and deportation,” Koubek said.