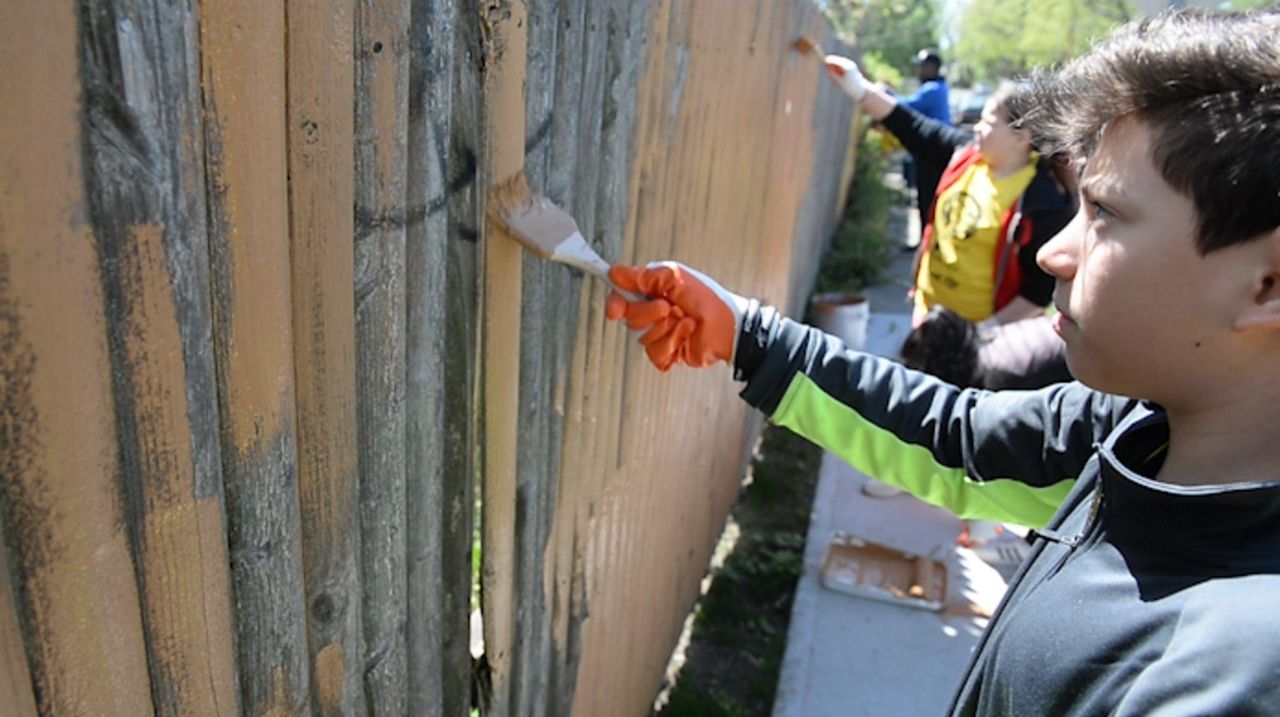 Nearly 400 people throughout Brentwood and Central Islip came to paint over graffiti, pick up trash and beautify communities that residents say too often are known primarily for gang violence on Saturday, May 6, 2017. The effort was co-created seven years ago by Marcos Maldonado, co-founder of the Clean Streets Committee, in an attempt to bring the community together.  Credit: Steve Pfost

Nearly 400 people fanned out through Brentwood and Central Islip Saturday to paint over graffiti, pick up trash and beautify communities that residents say too often are known primarily for gang violence.

“There are so many positive things that happen in our community, but only the negative things get magnified, not the positive,” said Maxima Castro, 58, of Brentwood, who has participated in each of the seven annual cleanups.

The event has its roots in a 2010 graffiti-removal project that the following year turned into a general cleanup, said Marcos Maldonado, co-founder of the Clean Streets Committee, which with nonprofits Uplift Brentwood and Youth Enrichment Services organizes the event. Local businesses donate cleanup materials and food.

Residents often are afraid to remove or cover graffiti themselves, worried that gang members may retaliate, said Ani Rodriguez, 53, of Brentwood.

“They’re intimidated because they don’t know what is gang graffiti and what isn’t gang,” Rodriguez said as kids and adults behind her used rollers and brushes to apply brown paint over graffiti on a wooden fence.

On the cleanup day, “there is safety in numbers” — and a Suffolk County police officer observing, she said.

The large numbers of children and teenagers participating in the cleanup illustrates how they — not the gang members — represent the sentiments of the overwhelming majority of Brentwood and Central Islip residents, she said.

Robert Myers, 46, of Brentwood said the graffiti removal “sends out a message that lets them know we’re not going to tolerate this stuff. It’s time for people to stand up. I can’t be afraid and hide in my house. We’re not going to allow them to intimidate us.”

Residents said it’s not only gangs who are literally trashing their community. On and near the site of a razed plating factory that now is used as an ad hoc skatepark by local kids, about 40 volunteers threw trash in dozens of plastic bags amid several piles of roofing material, wood and plastic buckets.

Maria Gonzalez-Prescod, 37, of North Bay Shore said Islip Town and the property owner need to do more to combat the dumping, and the town should place more garbage cans along roads where pedestrians walk.

In response, the town said in a statement, “We try our best and will continue to do our best to make all communities . . . free of garbage, litter and debris.”

You got the COVID-19 vaccine. Now what?
Oyster Bay begins formulating management plan for town harbors and bays
Drag racers get Riverhead's OK to speed down EPCAL's runways
1:05
Parents conflicted over whether to get kids 12 to 15 inoculated
1:41
Fantasy or unrealistic? Planners propose 200 mph train from NYC to Long Island to Boston
2:49
Nassau study to look at impact of COVID-19 on minorities
Didn’t find what you were looking for?