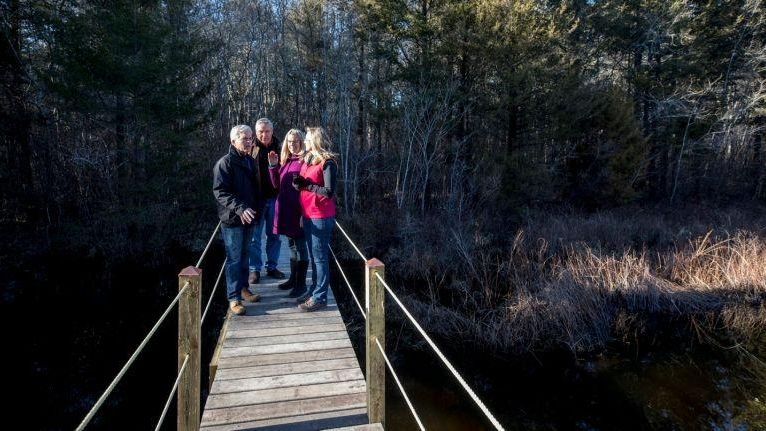 The Cranberry Bog bridge on Lake Ave. in Riverhead Town - closed by Suffolk County over six years ago because of severe damages - was popular with hikers. It is reopening after restoration efforts funded by Suffolk County. Feb. 1, 2018. (Credit: Newsday / Jean-Paul Salamanca)

If you rebuild it they will come, even if “it” is a rotting bridge popular among hikers in a preserve that is a haven for fish, turtles, snakes, salamanders and very rare or local mammals and plant life.

The 30-plus-year-old Cranberry Bog bridge in the Cranberry Bog Preserve in Riverhead had been closed by Suffolk County for more than six years because of natural wear and tear, and severe damage from storms and other weather.

The bridge was a focal point of a 1.1-mile trail loop in the preserve on Lake Avenue that borders Riverside, and was a favorite hiking spot among residents and visitors.

“It’s so peaceful,” said Suffolk County Legis. Kara Hahn (D-Setauket), chairwoman of the county’s Parks & Recreation Committee. “You come here, you look out on the water and there’s a serenity that you don’t get elsewhere.”

A petition from Quality Parks circulated online, calling for the bridge’s immediate repair, which Block said garnered dozens of signatures from interested and concerned supporters who wanted the county to repair the bridge.

Their hopes for the loop’s return were answered after restoration efforts funded by the county were completed in late January, county officials said.

“It just rotted throughout the years,” said Suffolk County Parks Commissioner Phil Berdolt. “Out of 30 to 40 years of the bridge just sitting here, it just rotted away.”

Reconstruction costs for the bridge were projected to be between $30,000 and $40,000 had the project gone out to bid — a hurdle that delayed repairs through the years. The bridge’s closing sealed off the trail loop and the scenic views.

Crews from the county’s Parks Department began work on the bridge in December, using leftover materials from other county projects to complete the repairs. Within four weeks, the restoration was complete. The reused materials resulted in a final tally of only $1,000, according to county estimates.

“This simple solution is opening up the preserve for people who’ve been coming here for years and years and years to hike,” said Suffolk Legis. Bridget Fleming (D-Noyac), who said she was contacted by many residents who had hiked the trail asking for help to fix the bridge.

With the repairs, officials said, the bridge is now expected to last for many years.

“It’s a great history here, it’s a beautiful preserve, and it’s a wonderful hike that you can now do once again because this bridge is open,” said Suffolk County Executive Steve Bellone.