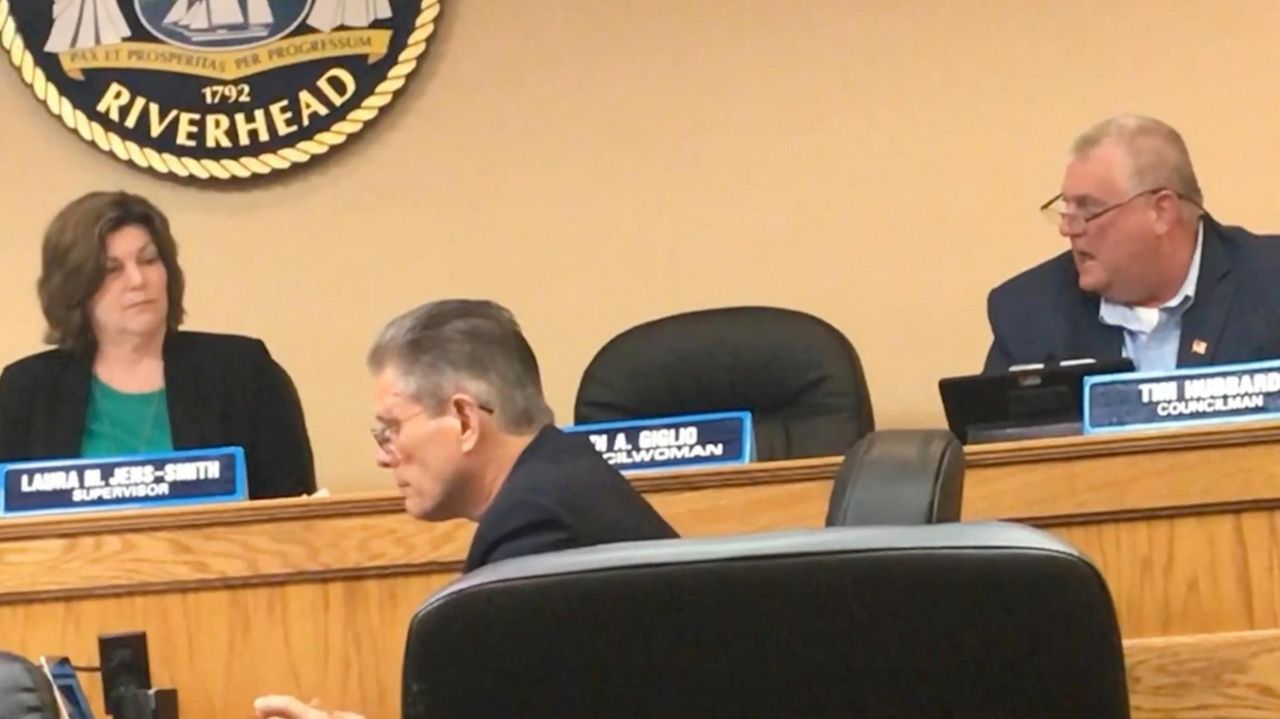 Riverhead Supervisor Laura Jens-Smith and Councilman Tim Hubbard voted on opposite ends at Wednesday's board meeting to pick a law firm for advice on a pending $40 million land sale at Enterprise Park in Calverton. The request for special counsel came after officials learned Luminati Aerospace LLC, a partner in the deal, had been sued for defaulting on several conditions of a $10 million promissory note.   Credit: Newsday / Jean-Paul Salamanca

The Riverhead Town Board failed to select either of two firms proposed for additional legal advice on a pending $40 million land sale of more than 1,600 acres at the Enterprise Park at Calverton.

Residents and three town board members had requested the advice because of legal issues facing one of the partners of venture group Calverton Aviation and Technology, which seeks to purchase the property.

With board member Jodi Giglio absent, the five-member board — acting as the Community Development Agency for its role overseeing economic development at the EPCAL site — voted 2 to 2 Wednesday on two resolutions, one for each proposed law firm. Without enough votes for either resolution to pass, neither firm could be appointed.

Calverton Aviation and Technology representatives did not respond to requests for comment.

The board was choosing between Garden City-based Stagg, Terenzi, Confusione & Wabnik LLP and Lazer, Aptheker, Rosella & Yedid PC, which has offices in East Hampton, Manhattan and Melville.

The request for the special counsel came after officials learned Luminati Aerospace LLC — a partner with Canada-based developer Triple Five Group in the deal — had been sued for defaulting on several conditions of a $10 million promissory note. The board was also concerned after Luminati failed to pay rent for the building the company occupied at the EPCAL site and was facing eviction.

After the meeting, Hubbard said CDA staff told him recently Riverhead was in “really, really good shape” to potentially receive $10 million in funding from New York State’s Downtown Revitalization Initiative, which could rehabilitate the downtown district. Hubbard said he was concerned proceeding with outside counsel could potentially hurt Riverhead’s chances at receiving the funding or discourage future businesses interested in the EPCAL property.

“All these dots have to be in place, and I want to do everything I can to make sure we’re not going to cut off our nose to spite our face,” Hubbard said.

Christopher E. Kent,  an attorney representing the venture group, said the board’s proposed action “may have a negative effect upon ... negotiations with respect to companies being attracted to the proposed development and with potential lenders who are looking to invest in the project.”

Hubbard added he wants to meet with Frank Isler, the attorney for Riverhead handling the deal, to ask him questions about the contract before considering outside counsel.

Jens-Smith said at the meeting while she was “disappointed” with Hubbard’s decision, she was open to having Isler meet with the board.

“I would hope at that point that you wouldn’t change your mind again and not want to use outside counsel or put up another roadblock so that we don’t have outside counsel to look at the contract,” Jens-Smith told Hubbard.