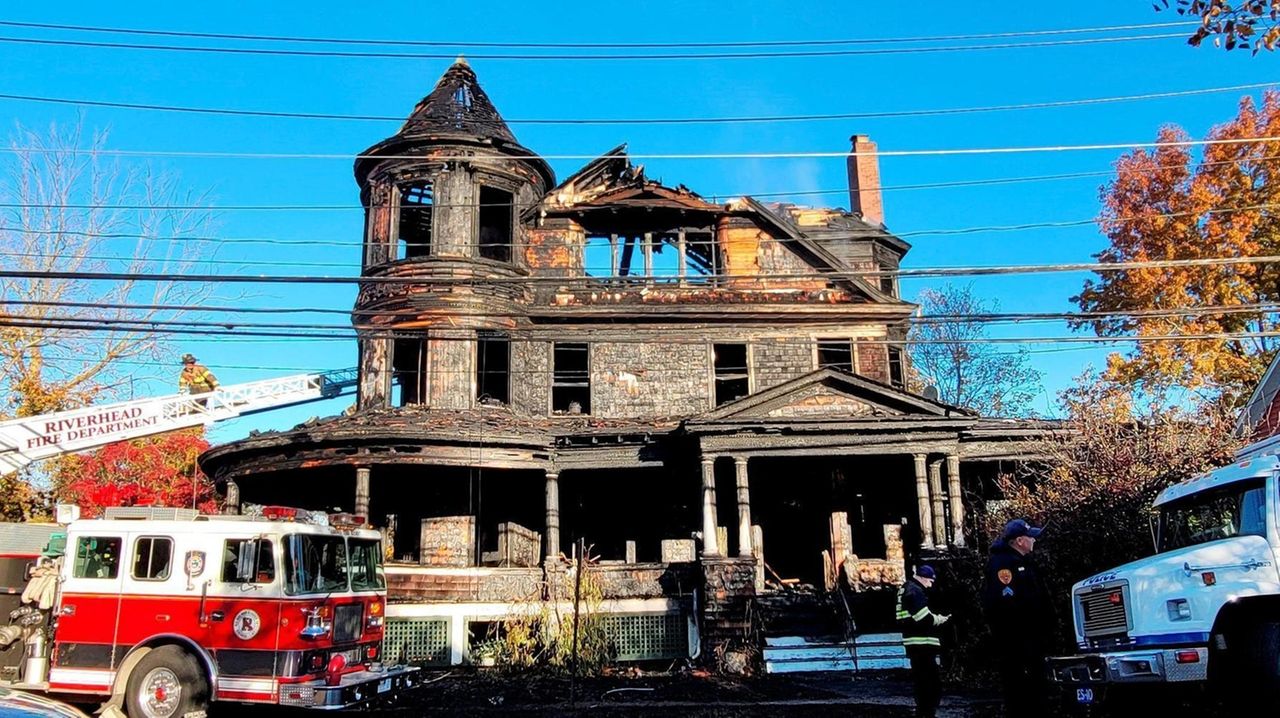 This story was reported by John Asbury, James Carbone, Matthew Chayes, Vera Chinese, Joan Gralla and Mark Harrington. It was written by Chayes.

Five members of an extended family were killed Tuesday in a late-night fire that tore through a century-old Victorian house in Riverhead apparently lacking smoke alarms, Suffolk police said.

The five were a mother, son, daughter and two nephews, and investigators believe the victims were trying to flee their third-floor apartment when they were overwhelmed by the blaze, said Suffolk Det. Lt. Kevin Beyrer, head of the Suffolk police department's homicide squad.

Beyrer, who said the cause was accidental, said there were 10 people total in the house, and that five people living on the first two floors were able to escape the burning building, which is on East Second Street.

Beyrer said there was a back door and a front entrance to the house, but the apartments all shared a center hallway of the house, which is from 1905 and made of a wooden frame.

"It’s a very old house, so it was a very fast-moving fire," Beyrer said.

Lori Starsiak and her grown son, Adam, barely made it out of the house with the clothes on their back, said Lori's sister, Carol Loper of Jamesport.

They lost their phones, electronics, eyeglasses and even a set of dentures, Loper said. They're staying at a Riverhead hotel while they recuperate from the fire.

"She’s OK. She got out in pajamas. She did have shoes on. My nephew had nothing on his feet," Loper said. "It’s an unbelievable thing, but thank God she was on the second floor and barely got out."

The family members who died were found on the third floor, which had only one exit, he said.

"They were not in their beds. They were probably attempting to get out," Beyrer said.

He said other members of the victims' family have been notified of the deaths, but that the police are waiting to publicly disclose the names until they are conclusively identified by the Suffolk County Medical Examiner's Office.

The police said firefighters responded to the 911 call within one minute and found the house fully engulfed in flames.

Arson investigators and homicide detectives searching the house found no criminal or suspicious cause.

"All signs right now point it to being noncriminal and accidental in nature," Beyrer said. "All the factors point to it being accidental."

A resident from the second-floor apartment had returned house from walking a dog, smelled smoke and heard neighbors across the hall yelling about the fire, Beyrer said.

The homeowner lived on the first floor and two residents lived in each of the two apartments on the second floor, Beyrer said.

Police said code enforcement believed they were all legal apartments. There is no indication, based on interviews, that there were any smoke alarms in the building, Beyrer said, adding, however, that he could not "definitively" conclude that at this time.

All landlords and property owners are required to have smoke alarms and carbon monoxide detectors on every floor, in every sleeping area and within 12 feet of every room, Riverhead Senior Building Inspector Andreas Sofoklis said.

He did not have any specific details on smoke alarms at the house where the fire occurred.

On Wednesday morning, people were seen consoling one another outside the house.

Neighbor Steve Tracy said that the night of the fire, he heard screams coming from inside.

"I was going to bed. I see my blinds all glowing red. I looked out. The whole house was engulfed," he said. He said he remembers thinking: "How could people get out of that? That's crazy."

The discovery of the bodies was made after firefighters extinguished the blaze, which was reported about 10:30 p.m., a police statement said.

The house is a three-story, cross-gable Victorian shingle-style house, according to a survey of the neighborhood posted on New York's Department of State website.

Aguiar confirmed that Cannella had rented out the apartments.

Referring to the dead, she said, "All five individuals were of Guatemalan descent, it appears, and the Guatemalan Embassy has been in touch" with family members to "supply support," which includes financial help.

Representatives of the Guatemalan consulate office in Riverhead declined to comment, as they had not yet been able to reach the victims' family members.

Richard Wines, chairman of the Riverhead Landmarks Preservation Commission, said buildings from that time are particularly at risk.

"Wood-frame houses are, unfortunately, vulnerable" to fire, he said.

Denia Archaga, who lives two houses away, said she lost her best friend in the blaze.

"It’s so sad," she said. She called her friend during the evening fire but got no answer.

Ruby Weston, who lives two houses away, said she was awakened Tuesday by banging at her door around 10:30 p.m.

"It was flames. I thought the trees were on fire, that’s how big the flames were," she said. There were flaming embers blowing all through the neighborhood.

"I thought my house was going to go on fire. … All I could do was grab my cat," she said.

Neighbor Irving Reyes, who lives behind the house, had similar concerns about the fire.

"The electrical wires were sparking. The wind was carrying the embers," Reyes said. "You could tell it wanted to go [spread]."

Katheryn Michel, a neighbor, said she didn’t know residents of the house. "I remember seeing a lot of toys out front," she said.

She said parents in the neighborhood are all part of a diverse, "tight-knit community" of Black, Hispanic and white people.

"There’s no divide," she said. "We’re all concerned. We just want to help."