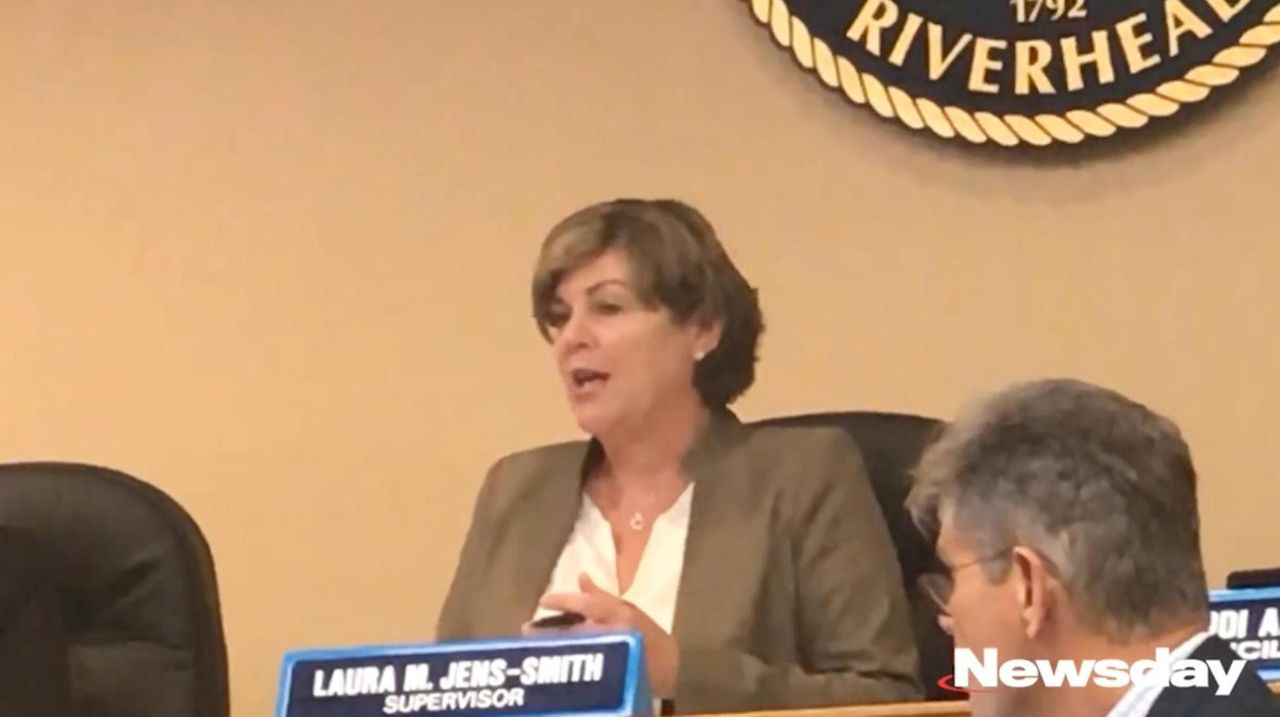 Riverhead Town Board members rejected a proposal to change the supervisor's elected term to four years from two during an Aug. 21 meeting at Riverhead Town Hall. Credit: Newsday / Jean-Paul Salamanca

Term limits for the Riverhead supervisor’s office will remain at two years after the town board Tuesday rejected asking voters to extend it another two years.

The board voted 3-2 at its regular meeting against a resolution to ask voters if they wanted to extend the town supervisor’s elected term to four years. The board’s vote was along party lines with all three Republicans voting against and both Democrats in favor. The town board in 2016 adopted a 12-year term limit for council members and supervisors.

Town Supervisor Laura Jens-Smith — who was sworn in to office in January after becoming the town’s first female supervisor in the November 2017 elections — said Tuesday that while she had not originally planned to put the resolution forward because of her short tenure in office, she decided to after several people and some board members had approached her about extending the office’s term limits.

“Whoever would be elected, I think it [a four-year-term] would be beneficial to them, Republican or Democrat, at the next election,”Jens-Smith said. “I don’t think it really is about the person in the seat, but it’s about the consistency of the seat and being able to do good for the Town of Riverhead.”

Town Councilwoman Catherine  Kent, a Democrat, said she didn't see the issue as a political one. "I see it as something that is better for our town,” she said. “I think it gives us an opportunity for more consistency and it gives the supervisor more time to get things done.”

Republicans on the board cited several reasons for rejecting the extension.

"We have a supervisor who’s been in office for eight months, and if I was happy with the job she was doing, I would probably support this going on a referendum, but I’m not," Councilwoman Jodi Giglio said. “And I’ll take liberty in voting every two years for my supervisor.”

Deputy Supervisor Tim Hubbard said that while he felt four years was necessary for the supervisor's office, “the people made it pretty loud and clear they do not want a four-year term for the supervisor’s position.”

“I personally think it’s a good thing, but then, I have to think ‘Well, who am I representing?' ” said Councilman James Wooten.