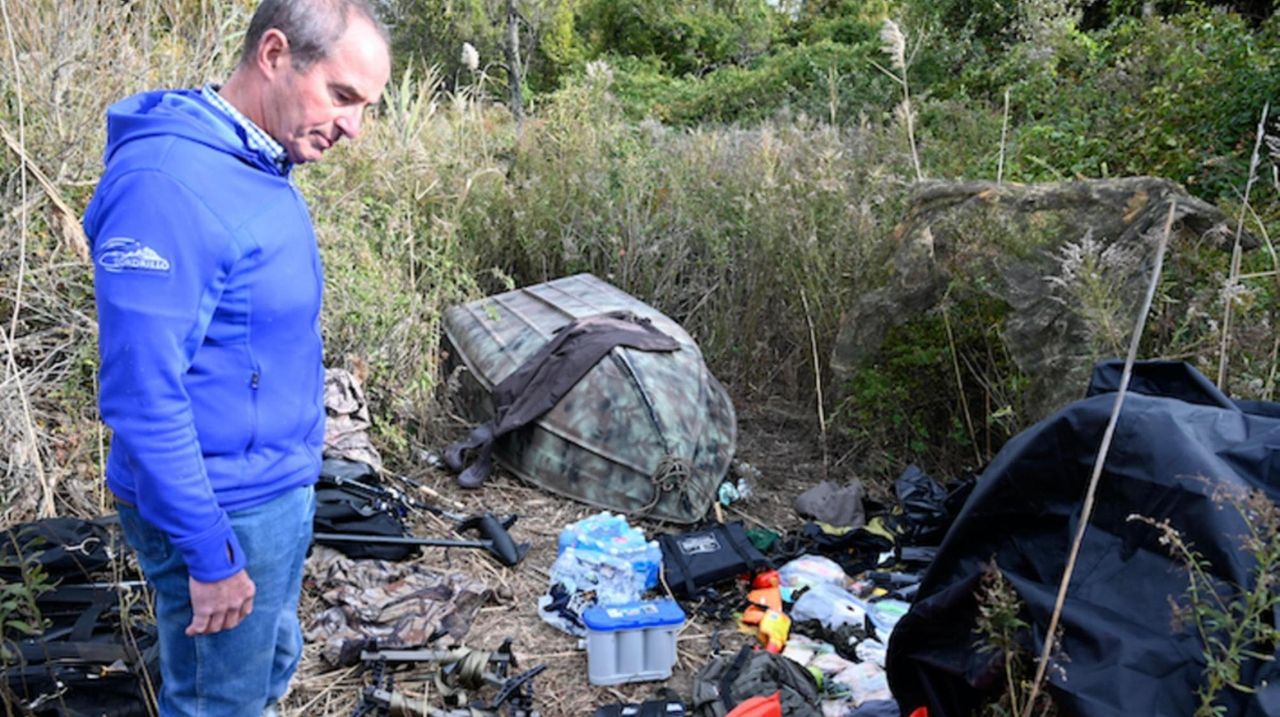 What seems to be a sophisticated hunting operation has been uncovered on Robins Island on a licensed game preserve of hedge-fund billionaire Louis Bacon. Credit: Newsday / Mark Harrington

Employees of hedge-fund billionaire Louis Bacon uncovered what they believe to be a hunting operation on a licensed game preserve on his Robins Island last Wednesday. Two men were cited with trespass and hunting violations, police said Monday.

The island is a licensed game preserve and its population of some 130 whitetail deer is managed by Bacon employees. It contains around a dozen rare albino deer, as well as 25-point bucks, which are prized targets of hunters.

Peter Talty, vice president of Belvedere Property Management, which manages Bacon’s conservation land holdings, said that in addition to concerns about the potential hunting activity on a game preserve, there is additional concern that the men posed a security risk to Bacon and his family. They were spotted in an area of the island that is not only a bedding area for deer but also around 100 yards from buildings used by Bacon, his children and guests.

"That’s our worry — what is going on here?" Talty said. "You’ve got armed people on the property with surveillance. It’s a little nerve-wracking. His kids come here. He’s a high-net worth individual."

Bacon, founder of hedge fund Moore Capital Management, has a net worth estimated by Forbes at $1.4 billion.

The state Department of Environmental Conservation on Sunday confirmed one of its officers "identified two men, one from Connecticut and the other from Beacon, N.Y., who were hunting on the island" without Bacon’s permission. "Neither of the men could produce a hunting license or tags." DEC did not identify the pair.

The DEC officer "ticketed the men for trespassing and not possessing a hunting license or tags." The men are due in Southold Town Justice Court on Dec. 1.

A copy of the Southold police blotter for the incident identified the two hunters as Curt M. Jorgensen of Beacon and Scott Russell of Bethel, Connecticut. The report alleges the two were "found on the island and were trespassing and hunting."

Reached Monday, Russell, who is no relation to the Southold supervisor of the same name, said: "I can't speak about it right now. We are going to talk to a lawyer."

One of the Bacon employees who spotted the men and signaled to his co-workers with a shotgun blast was told by police he could face unlawful discharge of a firearm charges, Bacon's lawyer, Daniel Rodgers of Southampton, said. If it happens, Rodgers said, "We will fight this vigorously."

The two men cited had complained to police about the shotgun blast.

Southold Town Police Chief Martin Flatley, in an interview with Newsday on Monday, said charges have not been formally brought against the employee and his investigation of the matter was continuing.

"We still haven't come up with charges based on the complaints [by] the two men who were poaching on the island," he said. Flatley said he was expecting that a trove of gear confiscated by the Bacon employees on the island could be returned to the men Monday.

Bacon, who bought 434-acre Robins Island out of bankruptcy for $11 million in 1993, has a conservation easement — which limits the use of the land to conserve it — over nearly the entire island, and all but a small finger of sand on its northern tip is posted as off limits. "He's a very private man," Flatley said. "The island is very private."

And, he said, "Everybody pretty much knows it is not open to the public."

During a Sunday tour of the facility with Newsday, Talty showed the encampment the men allegedly set up on a western edge of the island.

Bacon’s employees confiscated more than a half-dozen motion-sensor game cameras that can wirelessly send signals to receivers far from the island, as well as thumb drives believed to contain footage from the cameras. The numbered sequence of the cameras indicates there could be several more in the field, Talty said.

There were also two crossbows with several arrows missing from their quivers, suggesting that game may have been shot at or bagged; there also was a small boat with a battery-powered motor, fishing gear, a tent, tree stands and urine used as deer lure.

Talty said he and the employees are rethinking security on the island.

"We’ve gone through a couple of scenarios," he said. "Certainly you start worrying about your perimeter a lot more."