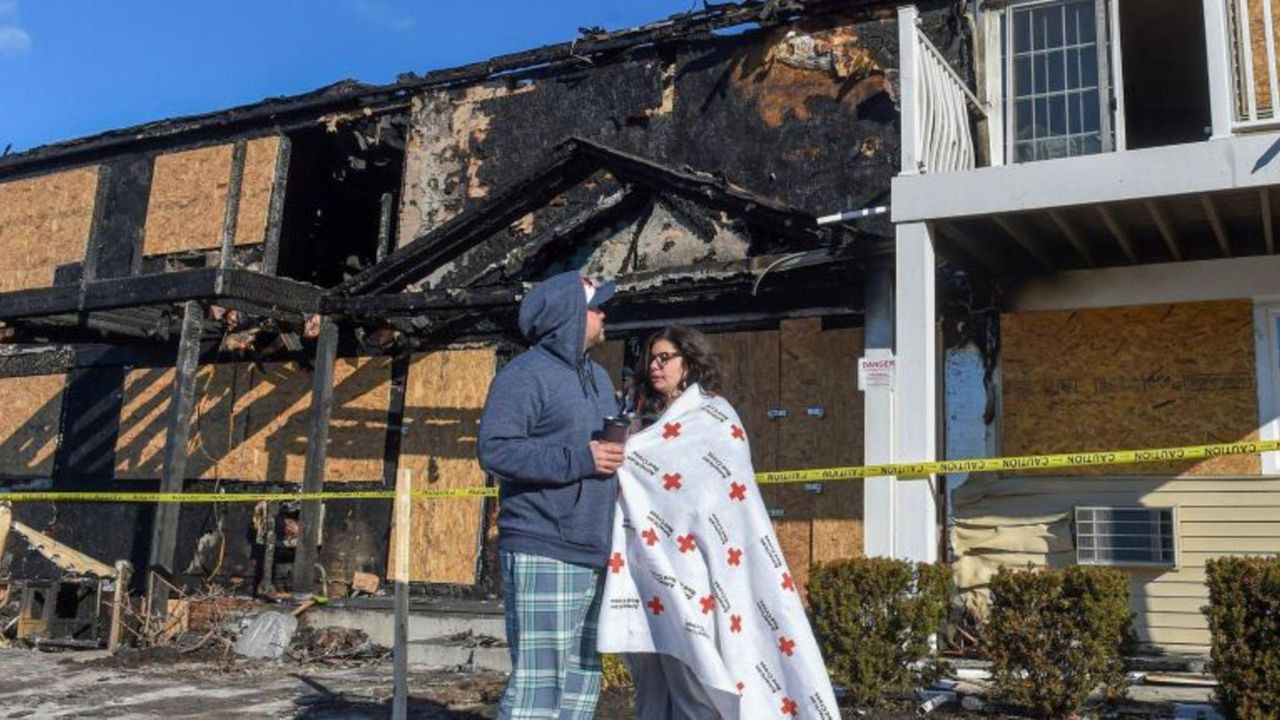 A woman trapped by fire in a Ronkonkoma apartment complex early Sunday morning was forced to drop her toddler from a second-floor balcony to her husband on the ground and then jumped to safety, Suffolk police said. Credit: James Carbone

A woman trapped by fire in a Ronkonkoma apartment complex early Sunday morning was forced to drop her toddler from a second-floor balcony to her husband on the ground and then jumped to safety, Suffolk police said.

Police responded to the fire around 12:50 a.m. Sunday at one of the several dozen buildings in the Colony Park apartment complex at Peconic Street in Ronkonkoma.

Late Saturday night, Jenna Schlick and her husband, James, were relaxing and watching television when they heard screaming outside their second-story Ronkonkoma apartment, she said. They looked outside, and when they saw flames and smoke below, Jenna Schlick grabbed her 20-month-old daughter and escaped to the balcony.

“None of our detectors went off, no fire alarms, nothing,” she said, adding that once her husband saw the fire on the first floor, “he told me I have to get the baby, get out of here."

With the fire below them and blocking the  building's front door, “we ran to our balcony,” Jenna Schlick said. We knew “we have to jump, we have to get out of here.”

James was the first to jump to the ground from the balcony. Then his wife gently dropped baby Julia into his open arms.

“He caught her and she was ok,” Jenna Schlick said. Her husband quickly carried the toddler away from the building and the smoke while neighbors helped her down.

The family was taken to Stony Brook University Hospital where Jenna Schlick was treated for scrapes and bruises.

Around 10 a.m., Jenna Schlick said the family was fine, and their daughter was napping in the car as they surveyed the fire's damage.

Police said another man was treated for minor injuries at Long Island Community Hospital in East Patchogue. No other injuries were reported. Lakeland Fire Department also responded to the fire.

Suffolk police have not released the cause of the fire, which its Arson Section is investigating.

The fire extensively damaged Building 29, which is across from the community center, and facing basketball courts and a playground in the large complex.

Tina Donegan, 53, said she was asleep in her ground-floor apartment when she heard screaming and banging through the wall.

“I thought it was a fight,” she recalled Sunday morning, but when she opened the door, “then I heard someone shouting ‘Get out! Fire! Fire! Get out!’”

Her son Liam, 17, woke up to his mother’s screaming, grabbed his phone and left.

“We grabbed pocketbooks, cellphones, whatever shoes we could find,” Donegan said.

Workers later Sunday morning laid a tarp on the roof of the block of apartments, and most of the windows had been boarded up.

They handed out hot drinks, snacks and cash-enabled cards for the families to use for shelter, food and clothing for the next few days, Barker said.

Ten or 11 apartments were affected, she said, leaving 27 adults, seven children and three dogs unable to go back into their apartments.

The Red Cross helps with the immediate emergency needs, Barker noted, but if people need longer-term assistance, the organization may be able to extend services or put people in touch with other groups that can help.

“We'll do some follow-up,” Barker said. “It’s so devastating to be put out of your home in the middle of the night and not know when you can go back in.”

Health insurance cost increases jump back to pre-pandemic pace
Seniors Calendar: Events from Oct. 31 to Nov. 7
Huntington schools to dedicate plaque to former educator who 'made learning fun'
Way to Go! Student named International Thespian Officer
Way to Go! Student cycles for cancer research
Asking the Clergy: What is All Souls' Day all about?
Didn’t find what you were looking for?