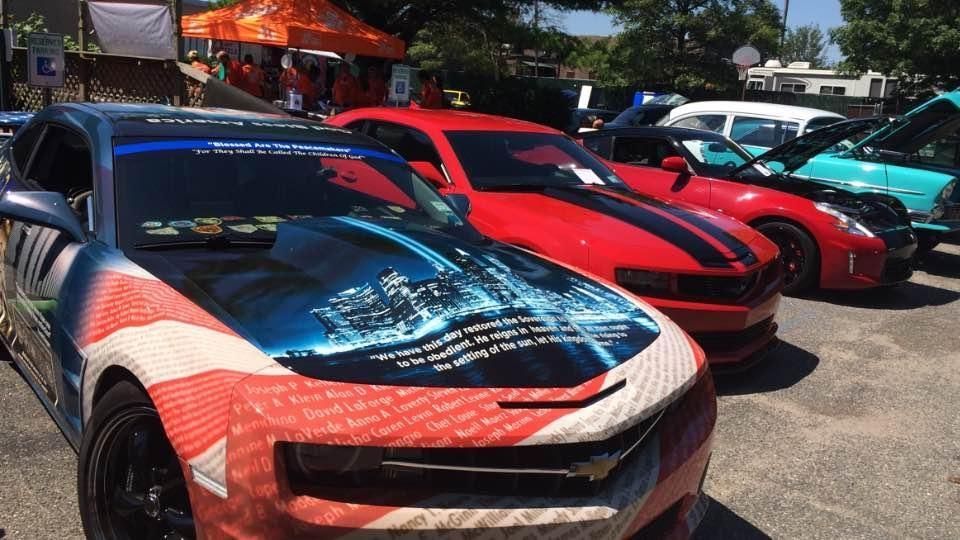 Joanne Giordano talked at the Kick Stands Up Motorcycle Poker Run and Car Show in Ronkonkoma on Sunday, July 16, 2017, about her 2011 Chevy Camaro, which was painted to honor Sept. 11 victims and military veterans like her son. (Credit: Newsday / Taylor Swaak)

Roger King of Sag Harbor was shot in the helmet in Iraq by a sniper eight days before his 21st birthday.

Eleven years later, King’s two tours in Iraq with the Marine Corps left the 32-year-old battling with a traumatic brain injury, post-traumatic stress disorder and a “loss of purpose,” he said.

So he leaned on Long Island’s robust veterans community.

King and hundreds of motorcyclists and car enthusiasts gathered Sunday at the Ronkonkoma headquarters of the Association for Mental Health and Wellness for the fifth annual Kick Stand Up Motorcycle Poker Run and Car Show.

The event Sunday raised funds for Suffolk County United Veterans, a division of the Ronkonkoma association.

A record number of close to 300 motorcyclists and about 90 car show enthusiasts registered for the show and ride after paying a fee to benefit the veterans group, officials said.

“We’re just so indebted to the people who showed up today,” said Michael Stoltz, the association’s chief executive.

The Founding Sons Law Enforcement/Military Motorcycle Club and the Impressive and Aggressive Motor Club co-hosted the show and ride.

While owners of the cars cranked up the hoods and chatted as classic rock blared in the background, the motorcyclists revved their engines and set off on a five-stop ride. Their objective: Grab a playing card at each stop. The three bikers holding the best hands upon return to Ronkonkoma won a cash prize.

King, who talked with other veterans Sunday at the show, said he used the Suffolk County United Veterans services for a about a year before becoming a peer mentor. He said the transition from military life to civilian can be difficult.

“It’s a different element, going from the military, where you’re being told what to do, to society, where now you have to grab the reigns and do it yourself,” King said.

“We serve others through transition and integration in all branches of [military] service,” Leis said, “so when they come home . . . they have a place where they can meet up with other veterans who have served and sacrificed.”

David Meitz, 54, of Huntington, has ridden motorcycles since he was 8, he said. But he had never ridden in a large group until Sunday.

“It’s huge to keep veterans in mind,” Meitz said. “I don’t have a Harley with me, so I’m kind of out of place, but I’m excited.”

Out in the parking lot, the entire hood of Joanne Giordano’s 2011 Camaro displayed the New York skyline at night, with two strobes of blue light illuminating where the Twin Towers once stood.

Her son spent six years in Afghanistan and Iraq.

To honor the victims of the attacks and the veterans who went to war afterward, Giordano, 51, of Rocky Point, said she drives the Camaro every day.

“You don’t hide it,” Giordano said of the Camaro and the loss it represents. “This is New York. This is us.”