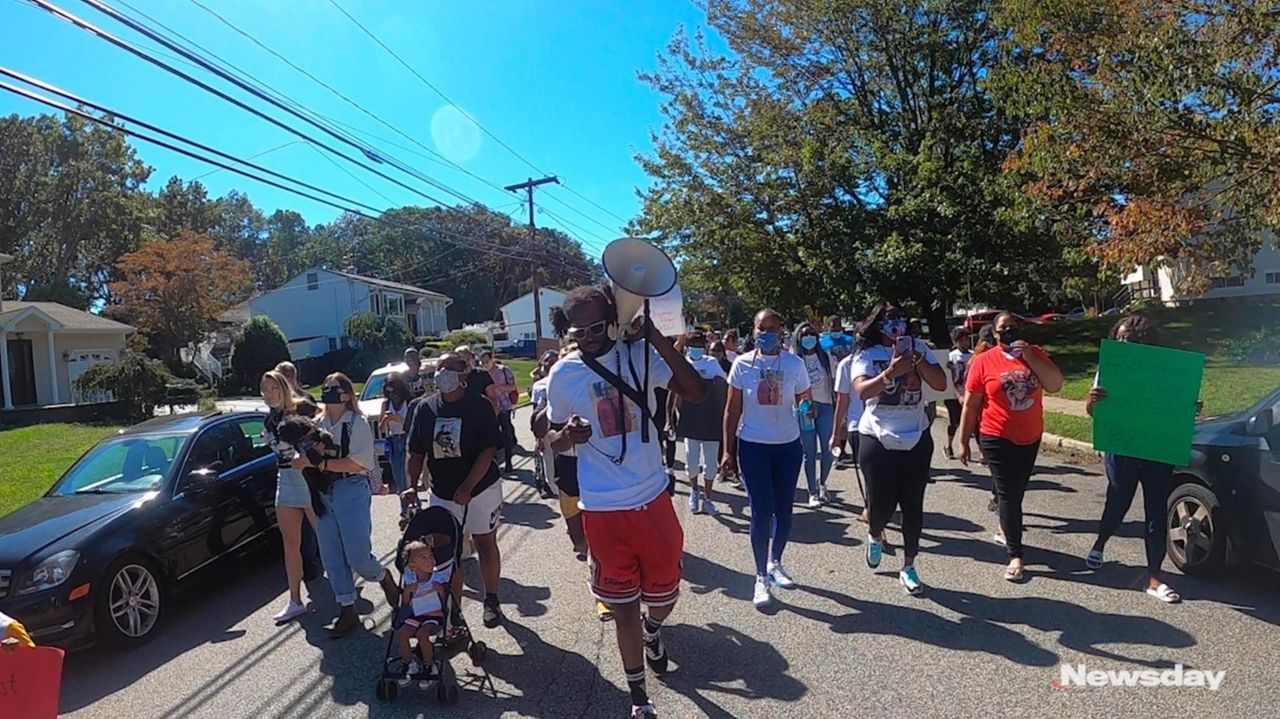 Protesters marched in Hauppauge on Saturday calling on authorities to upgrade charges against the driver in an alleged hit-and-run in Ronkonkoma that injured two young boys. Credit: Newsday / John Conrad Williams Jr.

The mothers of two children seriously injured by an alleged hit-and-run driver Aug. 3 helped lead a demonstration in Hauppauge Saturday calling for upgraded charges against the woman.

“My son is still in the hospital,” said Symone Houston, of North Amityville, the mother of one of the injured boys, Troy Russell, 9. “It’s hard to fathom that my son has to stay in the hospital every night and she’s home.”

Suffolk County police arrested Shannon Palmer, 31, of Hauppauge, the morning after she allegedly hit Troy along with Toriano Jamison, 12, of Patchogue, with the Ford Explorer she was driving while they were on their bicycles on the shoulder of Express Drive North in Ronkonkoma, on the same block where Toriano’s father lives.

Palmer pleaded not guilty Aug. 4 in First District Court in Central Islip to two felony counts of leaving the scene of an accident with serious physical injury. She was released under the state’s bail-reform law — a law that Houston said should be revised to keep people like Palmer behind bars.

More than 75 people walked several blocks through a residential neighborhood in Hauppauge shouting “Lock her up” and “Justice for Troy and Tori,” ending on a quiet dead-end street where police last month said that Palmer lives.

“We want Shannon Palmer to be accountable for her actions,” Houston said through a bullhorn. “We are here to let your neighbors know what you have done.”

Houston said in an interview that if Palmer “would have stopped, and if she would have just called the police and gave my baby some help, I would not have these feelings. I would have said it was an accident.” But instead, she said, “Our children were left for dead.”

Shonetta Jamison, of Patchogue, the mother of Toriano, said Palmer “needs to be charged with attempted murder. Leaving the scene of an accident is not enough.”

A Suffolk County district attorney’s office spokeswoman said in an email that “as with any case, we will investigate the facts fully and bring any and all appropriate, legally sufficient charges.”

About a dozen Suffolk police officers were observing the protest but suddenly arrested four people as the demonstrators stood in the street. Police appeared to give no warning immediately before the arrests, although two officers had earlier told some demonstrators to keep to the side of the street.

Houston, who praised Suffolk police for quickly locating Palmer, said she and others had not heard the police request to stay on the side and said “they should have given a fair warning before putting on the cuffs and taking people away.”

A Suffolk police spokesman said the four were charged with disorderly conduct and impeding a roadway, both violations, and would be released after processing.

Christopher Brocato, Palmer’s attorney, declined to comment on the specifics of the case, except to say that Palmer “says that she’s not guilty.” But, he said in reaction to the demonstration, “For people to call for her conviction when there hasn’t been one piece of evidence put before a court of law is crazy. We’re here in America. We have due process.”

For Houston and Jamison, the demonstration was an emotional one. Toriano, who spent three weeks in two hospitals before his Aug. 24 release, suffered fractured hips, a concussion and damage to his kidney, colon and lungs, Jamison said.

Troy has undergone seven surgeries and is expected to have several more, and doctors say he won’t walk for a year, Houston said. His legs were severely injured — his right leg “snapped in half” — and he suffered three broken ribs, a broken arm, fractured elbows and a broken wrist and thumb, she said.

“We want justice,” she said.