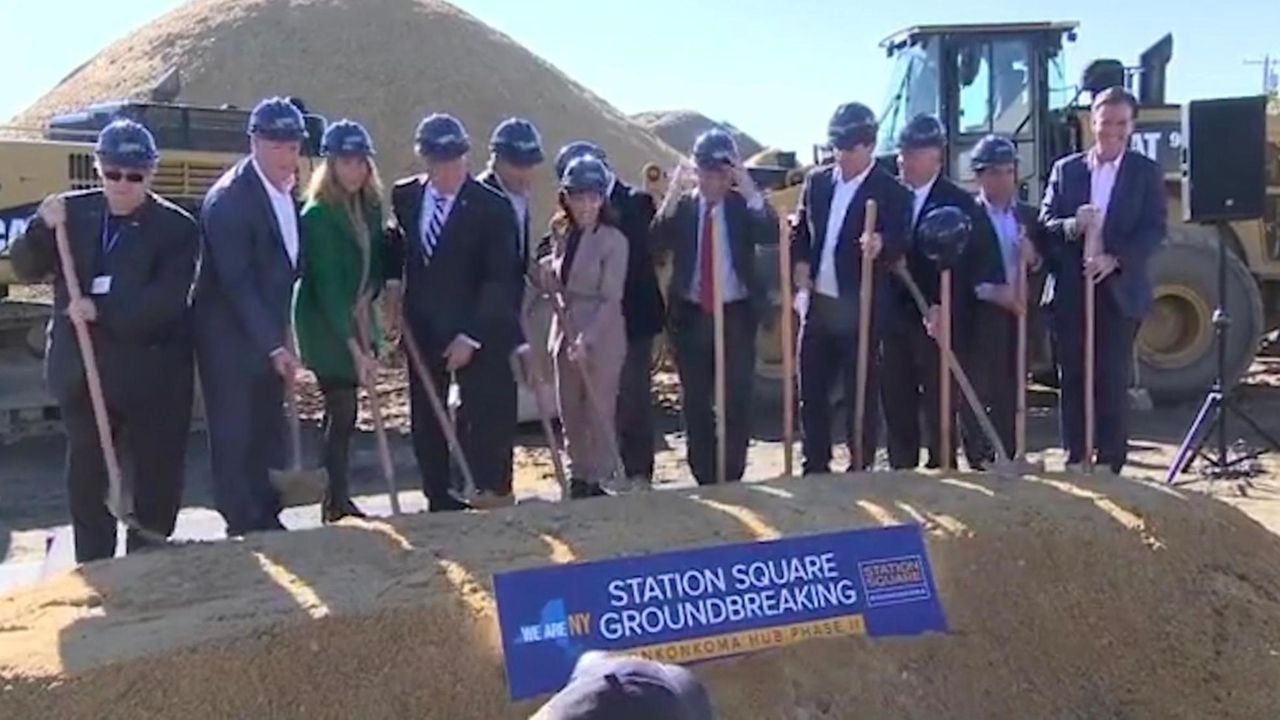 A groundbreaking was held on Wednesday in Ronkonkoma for Phase 2 of the Ronkonkoma Hub. The $256 million second phase will create 388 housing units, 73,000 square feet of commercial space, 15,500 square feet of office space and more than 1,200 parking spaces. Credit: NY Governor's Office

Gov. Kathy Hochul and Suffolk County officials broke ground Wednesday on second phase of the Ronkonkoma Hub, an apartment and retail complex designed to create a downtown community near the Ronkonkoma train station and connect to Islip’s McArthur Airport.

The $750 million project is planned on 53 acres just south of the Long Island Expressway and centered on the LIRR station. The second phase will include 388 new apartments, 73,000 square feet of retail space, 15,500 square feet of office space and 1,200 new parking spaces. Two new buildings in the second phase are set to be completed by 2024.

Construction on the first phase of the project started in 2017 and converted four vacant industrial buildings on the site into 489 luxury apartments in 2020, which now are about 92% occupied, said officials with East Setauket developers Tritec.

Local government officials and developers hope the new project will revitalize the center corridor of Long Island, create at least 10,000 jobs and generate billions in new revenue for the region. The master plan calls for a total of 1,450 new apartments, 360,000 square feet of office space and 195,000 square feet of new retail space.

Hochul said the new project was "creating the American dream" for thousands of young professionals and families on Long Island.

"What you saw here was the opportunity that people want to congregate closer together. The idea of just living out in suburbia, isolated, is not the dream that our children have for a good future," Hochul told dignitaries at the groundbreaking Wednesday. "They want their kids to be able to have walkable communities and to have transportation-oriented development, a phrase that no one even talked about until a visionary said, why not?"

Tritec co-founder James Coughlan said the middle of the island, like in the hamlet Ronkonkoma, was once left behind with the sprawl of the Long Island Expressway, with most villages built along the South Shore. He said it wasn’t until 2010 that communities began to look to redevelop around transit hubs like train stations.

"The different there was each project was an existing downtown. A walkable community needed a shot in the arm and disposable income to give those downtowns to give an uplift," Coughlan said. "Here in Ronkonkoma. There’s no downtown. We’re creating a downtown. We’re going to create the village. It was a request and demand from this community."

Empire State Development Corp. has awarded $55 million to the project for a new sewage treatment plant and sewer infrastructure improvements.

"You can’t do a project like this without everyone working together," Suffolk County Executive Steve Bellone said. "Despite the challenges in getting things done on Long Island, this is happening. That in some ways is a miracle.

"It gives me hope and optimism in the future. If we can come together across party lines and governmental lines to coordinate and work together to move forward something transformative this region. There is hope for us."

CAST widens social-safety net on the North Fork
Bulldog stolen from home during Thanksgiving burglary, cops say
Police: Man shot to death outside Moriches home
Asian vaccination rate of 15 and older highest among LI's ethnic groups
Kids who got placebo in clinical trials get real thing; new variant concerning
1:06
A 40-year, post-Thanksgiving football tradition lives on in Commack
Didn’t find what you were looking for?