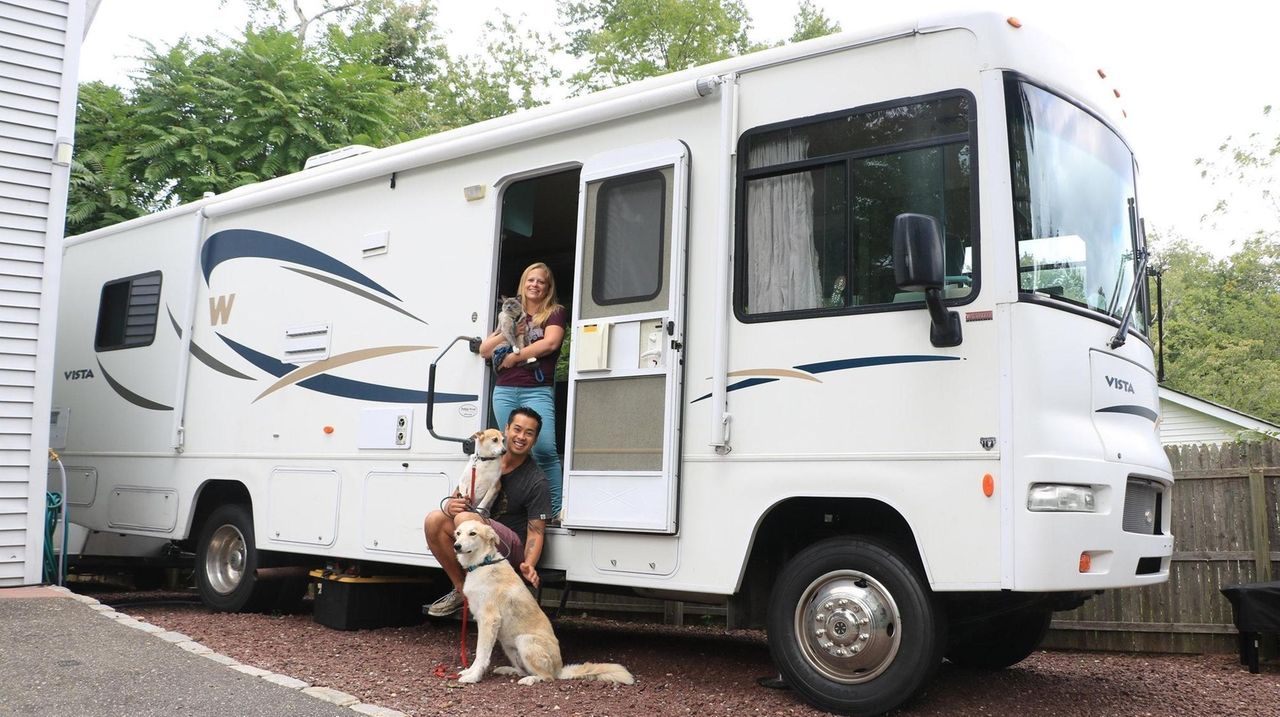 Kevin and Ashley Quiambao, who sold their Lindenhurst house and plan to live out of an RV, will start wandering across the country, part of a growing trend of people who live in vehicles such as school buses and vans for a more nomadic, affordable life. Credit: Newsday / Kimberly Yuen

Kevin and Ashley Quiambao were tired of the high cost of living on Long Island, where they say their monthly expenses average $7,000. So they came up with a plan to cut their costs in half: sell their three-bedroom, two-bathroom house in Lindenhurst and live out of a recreational vehicle.

The Quiambaos on Monday will start wandering around the country, part of a trend of people who live in vehicles such as school buses and vans for a more affordable, nomadic life.

The married couple bought their house in 2012 as a short sale. Their expenses included the mortgage, student loans, car insurance, pet costs for the couple's two dogs and cat, utilities, other bills and groceries. The Quiambaos said they felt that buying a fixer-upper was their only way to afford to live on Long Island, and it forced them to forgo saving for retirement because they had to pay for renovations.

“We both had decent-paying jobs, decent salaries, but we just felt like we were always kind of playing catch-up,” said Ashley, 31, a native of Oceanside who works as a lawyer in Amityville. “We just couldn’t figure out how to pay our maintenance, the upkeep of the house, the credit card bills — all these things — and then have money to put aside, unless we didn’t eat.”

The adventurous couple, who both love the outdoors, said some of their money also went to their travel fund.

Once they hit the road, Ashley says she’ll be working remotely part time for her law firm. Kevin, 35, originally from East Meadow, recently left his IT job to work on renovating the RV. He now runs a website company and will be looking for work he can also do from anywhere.

They anticipate their monthly expenses will now consist mainly of gas, food, park fees, insurance, the cellphone bill, pet costs and subscriptions to Hulu and Netflix — for which, all told, they’re budgeting about $3,200 per month.

The couple, who have been together for 11 years and married for two, had originally planned to move to Pennsylvania. But a 2 1/2-week trip to New Zealand in March got them thinking about life on wheels.

“We kept seeing people in vans and campers and everything over there and it kind of lit the fire for us,” Ashley said.

After the trip, they spent about a month thinking about living in an RV before listing their house for sale in June. It sold two days later for $460,000  — $11,000 over the asking price, the couple said.

“It couldn’t be a bigger sign for us that this is what we’re going to do,” Kevin said.

The Quiambaos moved out of their Lindenhurst house in mid-August and have been staying with Ashley’s parents in Amityville.

After selling their house, they paid off their remaining loans and found their new rolling home for $25,000 on Craigslist. Neither had ever driven an RV before.

“Wanda” — short for Wanderlust — is a 2007 Winnebago Vista Class A Motorhome. It’s 30 feet long, 8 feet wide and about 12 feet tall, providing about 300 square feet of space, compared with about 1,700 square feet in their last home.

They said they poured at least another $15,000 into repairs and renovations for Wanda, including adding solar panels to the roof.

“Our bedroom in the house was bigger than this whole RV,” Kevin said. “It’s definitely going to be an adjustment. It’s just minimizing to the essentials.”

The RV will also be home to the dogs and cat.

The Quiambaos don’t have a set route for their travels but eventually want to visit all the national parks. Their first stop: Shenandoah National Park, south of Washington, D.C.

They plan on parking the RV on public land through the Bureau of Land Management, campgrounds, Walmart parking lots and sites from Harvest Hosts, a website that helps campers find overnight spots through an online network.

About 750,000 to a million people in the country live full time in RVs, said Kevin Broom, a spokesman with the Recreational Vehicle Industry Association. It’s hard to get exact figures, he said, because some campers also own homes, some are nomads, some try the lifestyle out temporarily and some are totally off the grid.

The Quiambaos said both of their families have been supportive and didn’t seem to be surprised when they told them of their plan.

The trip is Ashley’s first time moving away from Long Island, so their families are planning to visit them at some point during their cross-country travels, said her mother, Kathie Hall.

Long Island "is home for as long as you want it to be home,” Hall said. “But home is wherever you’re happy. Nobody has to stay here on my account.

“Not to say I’m not going to worry about them. I don’t have a fear for them at all, just as long as they stay safe and healthy.”

"This is not a permanent solution. Maybe it is. Who knows?" Kevin said. "But what this is going to do is give us an opportunity to find what the next step is and find our path."

The two will document their travels through their website so friends and family can follow along their journey.

Editor’s Note: We’re looking for Long Islanders who have adopted unique housing or lifestyle situations to deal with LI’s cost of living. If you — or someone you know — have a story to tell, email kimberly.yuen@newsday.com.

This LI couple takes out the trash 3 times a yearMatt and Nicole Lentini strive for a "zero waste" lifestyle, and avoid adding to landfills by reusing and repurposing items and buying products made of natural materials. LIers convert old school buses into tiny homesIt used to be a 66-passenger school bus, but in a few months, it will ... Why this LI man decided to leave and live out of a vanFarmingdale native Joseph Ephraim became a "van nomad," traveling from state to state while living out of a converted Ford E350 cargo van. This LIer has a waterfront view with no mortgageA waterfront house with no mortgage and no property taxes on Long Island. That almost sounds too good to be true, but Sal Cataldi is proof that it's possible.