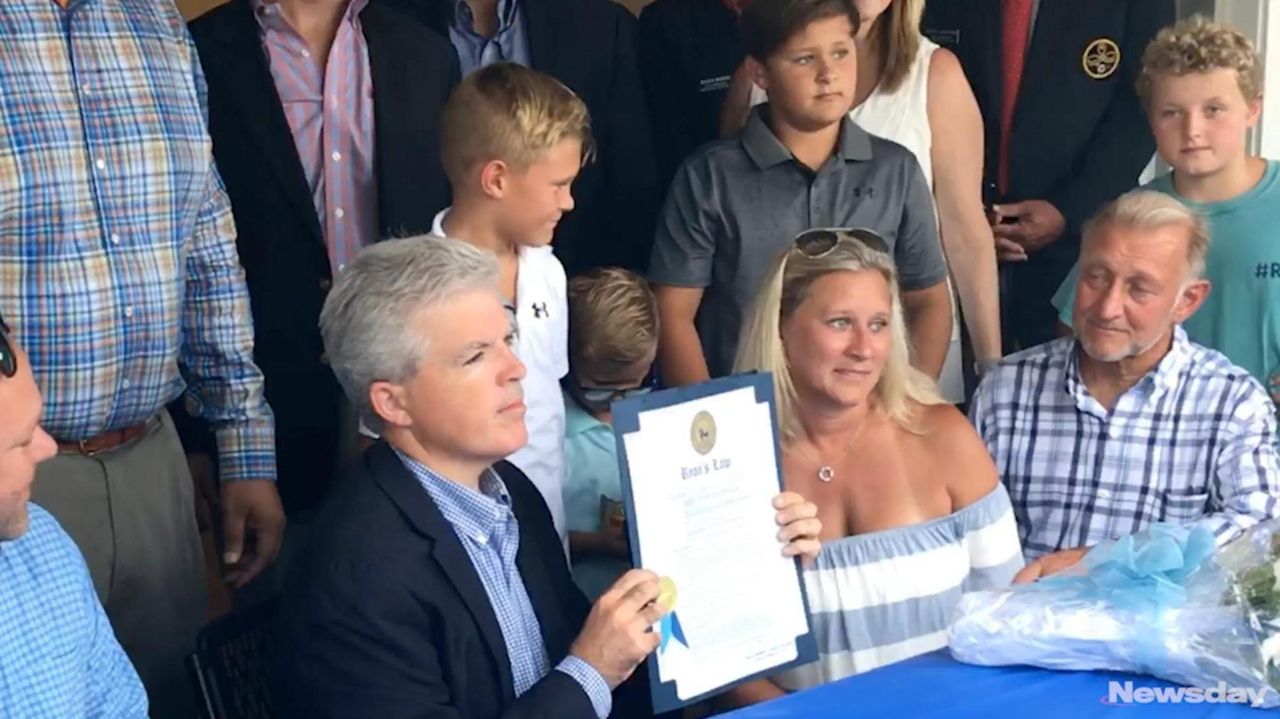 In what she described as “an extremely bittersweet” moment, Kellie Weiss watched Saturday as Suffolk County Executive Steve Bellone signed into law legislation aimed at protecting children like her son, who died in a boating accident last year.

The law, which Kellie and her husband Kevin lobbied for after their 12-year-old son Ryan was killed by a boat propeller, requires boats used for instructing minors to be equipped with propeller guards.

“We stand here forever heartbroken, and though this can’t bring Ryan back to us today, we hope that we have the opportunity to protect somebody else, some other child out there,” Kellie Weiss, who lives in Greenlawn, said.

Ryan died July 18, 2017, during a controlled capsizing lesson at the Centerport Yacht Club, where the bill signing was held. After being taken from the water in an inflatable Zodiac boat, Ryan fell overboard when the boat took off and the propeller fatally struck him.

Kellie and Kevin Weiss remembered their son Saturday as a child who loved the water and boating at the yacht club.

Suffolk Legis. William Spencer (D-Centerport), who spoke at the ceremony, credited Kellie Weiss for “speaking as only a mother could speak” when she came before the legislature earlier this year advocating for the bill, which was unanimously approved.

“Every Democrat, every Republican, this is something we came together to do and it was a wonderful thing,” Spencer said.

Ryan’s Law, which the Suffolk County Legislature approved in June, states any vessel on Suffolk County waterways used to teach people under age 18 about marine navigation and safety in a formal setting such as an instructional course conducted by a marina, yacht club or boating organization must have a cage or encasement surrounding the propeller “to ensure the safety of students and to protect against accidental injury.”

Costs for installing the propeller guards are estimated to start around $100, county officials said.

Ian Milligan, commodore of the Greater Huntington Council of Yacht and Boating Clubs — which represents more than 4,000 recreational boating families in Huntington — said his club fully supported the law, adding his members had volunteered to install such propeller guards themselves. Some pending amendments are in the works, Milligan said, that would address previous concerns from club members, such as clarifying what kinds of vessels and motors fell under this new law.

Describing the local boating community as “tight-knit” and “like a family,” Milligan said they hoped the law would inspire similar legislation on the state level. “It’s unfortunate that this accident happened, but we’re hoping this law will help to encourage others to take these safety precautions...so they can have the benefit of this lesson without having to go through a tragedy,” Milligan said.

As a tribute to Ryan, the crowd of several dozen people gathered on the sandy shores of the club overlooking Northport Bay and placed white flowers into the waters.

“There is no doubt as I sign this legislation in my mind that Ryan’s Law will save lives, and that is an incredible legacy for this young man and for his family,” Bellone said during the signing ceremony.

Comptroller: Long Beach relying on 'one shot revenues' to balance budget
1:25
Doctors disagree on whether Cuomo's decision to lift restrictions is wise
Suffolk gets record $7.2 million payment from OTB
3:19
No criminal charges for many drivers in crashes that kill pedestrians, bicyclists
What we know about the high, broad turnout in the 2020 election
Rep. Zeldin: I won't call Biden election 'illegitimate'
Didn’t find what you were looking for?