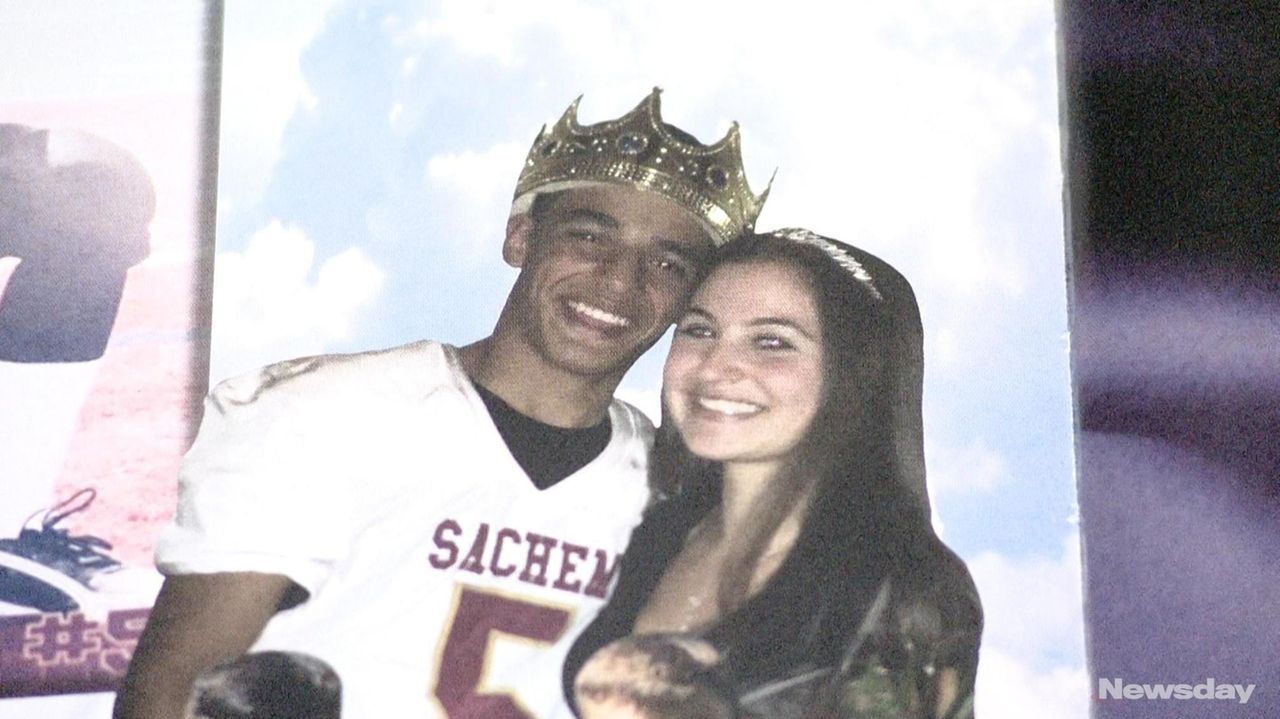 On Wednesday, Kenneth Mollins, the attorney for the families of three Sachem High School East football players, discussed their motion asking a judge to let them file a $15 million lawsuit against the school district and a booster club for allegedly failing to provide adequate counseling  after a teammate died during a training drill. Credit: News 12 Long Island

A Sachem high school student says he still wakes up screaming, 10 months after he saw his teammate crushed by a 400-pound log he and other teens carried during football training last summer.

Every day is a struggle, Nicholas Paolucci, 16, said Wednesday, speaking publicly for the first time since Joshua Mileto died on Aug. 10 after the log they and three other players held above their heads during a conditioning drill fell.

“I get two to three hours of sleep a night, at the most,” said Paolucci, of Farmingville, who sees a psychologist weekly. “I just wake up with panic attacks and stuff every night.”

Paolucci’s mother and the parents of two other player said their sons are still traumatized by what they witnessed. They have asked the court’s permission to file a $15 million lawsuit against the school district, claiming officials failed to provide adequate mental health services to the teens.

Alicia Paolucci said Nicholas has not been the same person after Mileto’s death. “He has nightmares. I hear him screaming in his sleep. He gets angry very quick. He has anxiety and panic attacks, which he never had before,” she said in an emotional news conference in Hauppauge Wednesday.

She and the other parents, Joseph Kmiotek of Farmingville and Joseph Udaze of Holtsville, filed a motion Tuesday asking a state Supreme Court justice in Riverhead to let them sue Sachem Central School District and Sachem East Touchdown Club, a parent-run booster group.

The deadline to file a notice of claim, the first step in suing a municipality, has passed, so the parents must get court permission to sue. The parents said the district initially brought mental health professionals into the high school to help those affected by Mileto’s death but stopped after two visits.

The administrators had promised to continue mental health counseling but never provided it, the parents said.

Kenneth Graham, superintendent of the Sachem Central School District, said in a statement the mental health and safety of students and staff is a top priority.

“In the aftermath of the horrific events that took place during the August 10, 2017, tragedy, the district enacted steps to provide in-district and out-of-district support services to our student body and staff,” Graham said. “Counseling services are available on an ongoing basis for anyone in need.”

The teens, Mileto, Nicholas Paolucci, Joseph Udaze Jr., and Matthew Kmiotek, 17, the team captain, were at a summer football camp for high school players. It was organized by the parent-run booster group and run by school staff, including Sachem East football coaches.

Mileto was “severely injured . . . [when the log] became unstable and was dropped, crushing Joshua’s head, neck, skull and other parts of his body,” the court papers say.

The parents’ motion claims the three boys suffer from “severe emotional and mental stress, trauma and distress,” in the wake of Mileto’s death.

“When the log fell on Joshua, the young man [Udaze Jr.] got down on his knees and cradled Joshua as he was bleeding,” said Kenneth Mollins, the attorney for the parents. “He held him until help came.”

The booster club could not be reached Wednesday.

Kmiotek said he too has been seeing a psychologist “on and off” but found it easier to talk about what happened on Aug. 10 when his teammates are with him. Sometimes, he said he and Nicholas Paolucci went to therapy together.

“It definitely helps, but the pain is still there,” Kmiotek said.

Sachem East pays tribute to Josh Mileto Josh Mileto's No. 5 was not only in everyone's heart and on everyone's mind yesterday ... Suit would look to establish blame in athlete's deathThe lawyer for the family of Joshua Mileto, who died last month during a training ... Funeral set for teen killed during log drill at football camp As a community struggled to come to terms with the sudden death of a young ... Officials to talk safety after teen dies during log drillThe death of a 16-year-old Sachem High School East football player during a training drill ...