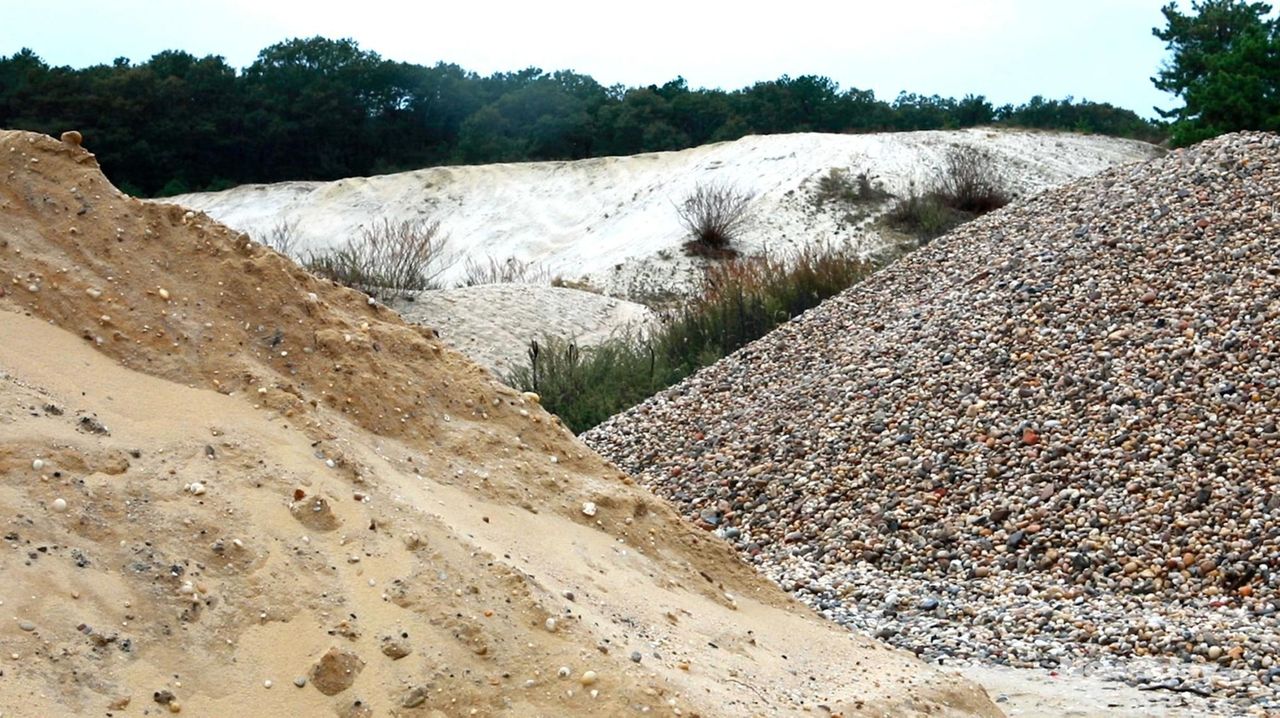 More than half of the 23 active-permitted Long Island mines are in Southampton, East Hampton, Riverhead and Shelter Island towns. They produce nearly 3 million tons of sand per year. Credit: Newsday / Shelby Knowles

East End officials and the state Department of Environmental Conservation are clashing over how to regulate sand mining on Long Island, a $36.5 million-a-year industry that environmentalists warn could be harming the source of the Island's drinking water.

Long Island's sought-after sand — which is said to have crystals resulting from the region's creation by glaciers thousands of years ago — has been mined for more than a century, trucked to New York City and shipped as far as Egypt to make cement.

East Hampton Town in the past two years has used mostly mined sand to continually replenish the downtown Montauk beach, which over the years has been battered by erosion.

After water, sand is the most mined resource in the world. Land is cleared of trees and other vegetation, so diesel-powered heavy machinery can extract sand from beneath the Earth's surface. The various layers of the three aquifers — the Upper Glacial, the Magothy and the Lloyd — that provide Long Island's drinking water are permeable and thus vulnerable to contamination from the heavy equipment or waste processing, such as composting, a common secondary use at the sites.

“Once you open a scar in the earth, you’ve created a direct conduit of contaminants into the aquifer,” said Bob DeLuca, president of the nonprofit Group for the East End. “They [the DEC] will not accept that this is a problem.”

More than half of the 23 active-permitted Long Island mines are in Southampton, East Hampton, Riverhead and Shelter Island towns. They produce nearly 3 million tons of sand per year, according to the Long Island Contractors' Association — enough to pave a Long Island Expressway lane from the Queens/Nassau border to Riverhead.

The DEC, which has sole authority over mining permits, recently greenlighted several South Fork permit applications over the objection of local authorities and residents, stating the requests are considered modifications of existing permits and thus grandfathered in.

Those opposed to the permits said getting to the sand poses a risk to Long Island's drinking water because it can involve a process that excavates to the aquifers, leaving large holes, removing protective layers of rock, clay and soil covering the aquifers, and exposing the water table to contaminants.

The DEC has maintained it requires mining to be conducted in an environmentally responsible way and the land to be returned eventually to a productive use.

The "DEC continues to provide rigorous oversight of mine operations to ensure they meet the existing permit requirements that are protective of the environment," a spokeswoman said in a statement.

The Long Island Contractors’ Association stresses that sand mining alone, without vegetative waste processing, has not been proved to impair or impact groundwater.

A May report from the New York Public Interest Research Group found that Long Island's water already has the most emerging contaminants of any region in the state, with the highest detections in the nation of chemicals such as 1,4-dioxane, an organic compound and likely carcinogen.

Long Island's aquifer is accessed through public and private wells. Water from private wells is more susceptible to contamination because these tend to be more shallow than public wells. The Suffolk County Department of Health Services has offered private-well testing since the 1950s, and in 2018 alone tested about 1,500 private wells for contaminants.

A spokeswoman said the department is not aware of any person becoming sick from the effects of sand mining or vegetative waste materials. The department first became aware of potential impacts to groundwater in 2009 when it began testing monitoring wells near a Yaphank composting facility.

Environmentalists and local officials increasingly have been critical of what they see as the DEC's permissiveness over mines in special groundwater protection areas. Southampton Town has filed a pair of lawsuits this year against the DEC seeking to overturn approvals, one over Huntington Ready Mix Concrete Inc.'s lake mine in Speonk, and — along with Assemb. Fred Thiele Jr. (I-Sag Harbor) and environmental groups — another over the controversial Sand Land mine in Noyac operated by Wainscott Sand & Gravel of Bridgehampton.

Huntington Ready Mix's Albany attorney Kevin Brown declined to comment on the litigation, but noted the need for sand mining and said a properly regulated mine shouldn't pose environmental concern.

The DEC said Sand Highway LLC's proposed East Hampton lake mine, 110 feet below the water table, does not require further environmental review. That point is disputed by East Hampton Town officials and the Suffolk County Water Authority, which has a public well nearby. A DEC spokeswoman said the agency will review the comments and make a final decision on the application. Permit applicant Patrick Bistrian Jr. did not return a call seeking comment.

Sarah Meyland, director of the Center for Water Resources Management at New York Institute of Technology in Old Westbury, called the history of mining oversight poor and criticized the practice of digging into the groundwater.

“That should not continue to be allowed,” she said. “What you are looking at there is drinking water. Do you want a lot of mining equipment digging through what is ultimately going to be your drinking water?"

A 2018 Suffolk County Department of Health Services report found that mulching and composting at Sand Land caused “significant adverse impacts on groundwater” and that manganese, a mineral that has been associated with neurological disorders, exceeded drinking water standards by almost 100 times and iron by more than 200 times.

Sand Land representatives have disputed the county’s findings strongly and said their own investigation found the operation did not cause the contamination. The report did not find that anyone's health had been impacted directly by the site. Judging by the depth of contamination, the property likely had been polluted for years, DeLuca said.

The DEC contested the county’s report in court filings and pointed to a nearby golf course as another potential source of contamination.

“I do not believe there is a definitive scientific report that attributes the groundwater contamination directly to Sand Land alone,” DEC deputy permit administrator Mark Carrara wrote in an email to a DEC lawyer, according to a lawsuit filed in April in state Supreme Court in Albany by Southampton Town and others. The town essentially is asking a judge to overturn a March agreement that allowed Sand Land to continue operating.

Carrara's position contradicts a September 2018 letter from DEC environmental permit director Daniel Whitehead to Sand Land in which he pointed to the county report in declaring the agency’s opposition to further mining at the property. Local leaders at the time thought the mine was on an immediate path to closure.

The state agency stunned environmentalists and local officials when it announced March 15 that it had reached an agreement allowing Sand Land to continue mining for eight years and permit the operator to expand 40 feet deeper, but banned composting on the site.

"I have no idea why the DEC does not represent the community when it comes to environmental protection," said Elena Loreto, president of the Noyac Civic Council, which is part of the Sand Land lawsuit. "They are out to lunch."

The DEC defended the settlement, saying it imposed the most stringent requirements on any sand mining operation in the state. As part of the agreement, the company will cease operations within eight years and in the meantime implement several new actions to protect water quality.

"New York State will continue our aggressive on-the-ground oversight to ensure Sand Land complies with all rules and regulations and to ensure that its operations do not threaten the environment, especially our precious groundwater resource," DEC Commissioner Basil Seggos said at the time.

Bills would prohibit mining in some sites

Following the Sand Land determination, Thiele and State Sen. Kenneth LaValle (R-Port Jefferson) introduced legislation that would prohibit mining in Suffolk and Nassau counties on sites where the groundwater has been contaminated. The bill, which has not been voted on, was supported in a Suffolk County special grand jury report in September on the effects of illegal sand mining and dumping.

The grand jury report also called for an expansion of the county district attorney's Environmental Crime Team and increased penalties for illegal sand mining, among other suggestions. The special grand jury was empaneled in July 2018 by Suffolk District Attorney Timothy Sini to investigate the effects of illegal dumping and other environmental crimes on Long Island.

Advocates note construction costs would skyrocket without local sand, and mining representatives fear that, if adopted, Thiele's proposed legislation could cripple their industry. An industry rule of thumb is that the cost of transporting sand 30 to 50 miles exceeds the cost itself, according to a letter from four local sand mine operators opposing the legislation. Trucking in out-of-state sand could result in 900 more truck trips per day on Long Island, according to the operators.

"There have been studies that show if we close half the mines in New York, you can double your budget for infrastructure just based on hauling costs alone," said Brown, the attorney representing Huntington Ready Mix.

“Masked as an effort to protect ground drinking water, the proposal, if enacted, would close the 23 currently permitted mine sites in Suffolk County, resulting in lost jobs, lost productivity, lost tax revenues, drastically increased costs for infrastructure and a substantial increase in heavy-duty trucks traveling through New York City,” reads a memo to state officials from the Long Island Contractors' Association.

Thiele expressed skepticism that the law would hobble the industry or that all mines are on contaminated sites, but he said that if they are, it only underscores the need for stricter regulation and enforcement.

The Southampton Town Board at its Oct. 8 meeting voted to renew a contract with East Coast Mines, which has the same permit holder as Sand Land, John Tintle. Moments later, it approved a resolution to pay the law firm representing the town in the Sand Land case an additional $40,000.

Stan Warshaw, vice president of Hampton Sand Corp. in Speonk, said debris processing is needed locally and is a way to keep a property economically viable after it's been mined. He said samples from the monitoring wells on his property show the operation does not affect the groundwater and noted his site is regularly inspected by the DEC.

“They’re trying to stop sand mines from recycling, but where would you like to do this recycling?” he said. “It’s not like we’re doing something terrible.”