Sen. Chuck Schumer with Rhonda Verrier in front of her Sandy-damaged home in Lindenhurst on Monday. Credit: James Carbone

Sen. Chuck Schumer announced Monday an “all-out push” to get Congress to extend the deadline for the National Flood Insurance Program.

The program, with thousands of Long Islanders taking part, is due to expire on July 31. Schumer said with hurricane season starting on June 1, there is an urgency to renew the program soon.

“Flood insurance is vital to over 150,000 Long Islanders,” Schumer said at a news conference in Lindenhurst. “So, A, we need to renew it and, B, we need to straighten it out so the insurance companies and the federal government doesn’t take advantage of these homeowners.” 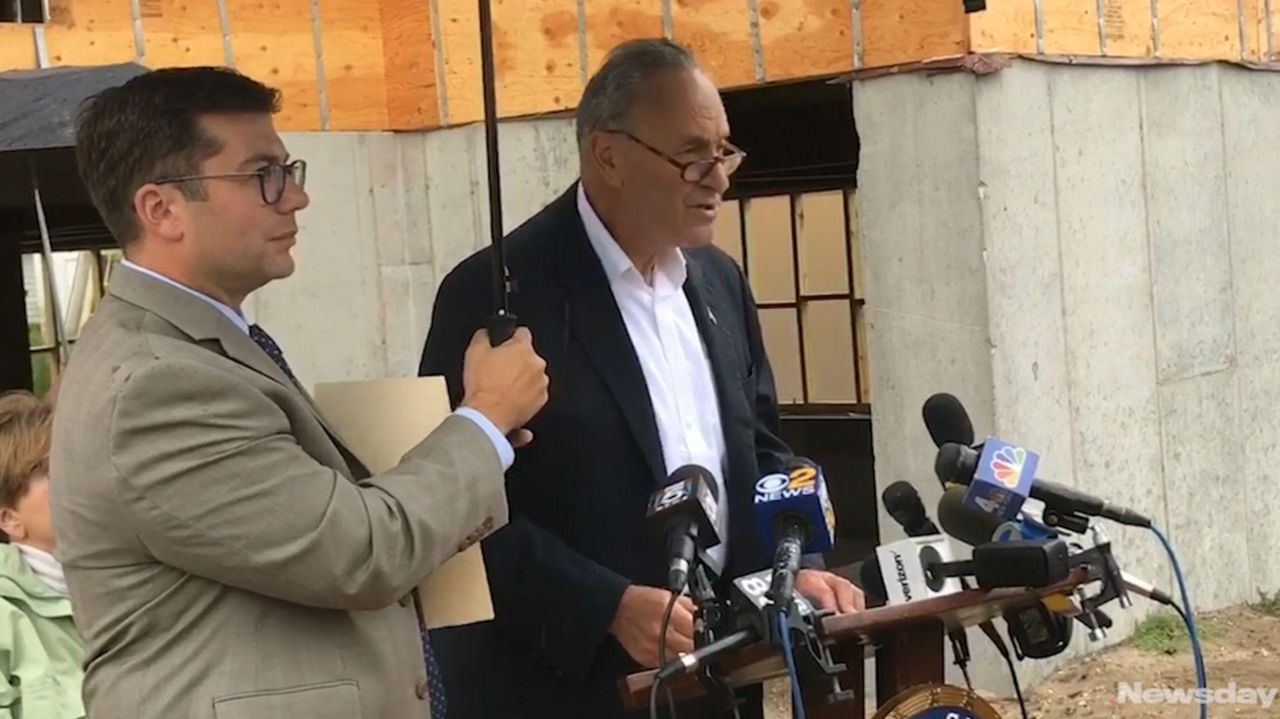 Those improvements should include fair and stable insurance costs for homeowners and more accurate flood maps, Schumer said. Rates can be controlled with restrictions allowing for increases of only a certain percentage each year, he said, while better mapping can be achieved using drone technology.

According to FEMA, which manages the flood insurance program, a lapse in the program means they must stop selling policies immediately and the National Association of Realtors estimates this may result in the delay or cancellation of more than 9,000 home sale closings per week nationwide.

In a statement, FEMA spokesman William Booher said that “bold reform” is required to improve the program in conjunction with the agency’s four reauthorization principles in order to address policyholder concerns. The principles are a multi-year reauthorization; a sound financial framework; increased flood coverage; and improved customer experience by making the program a “simple and easy experience” that homeowners can trust.

Schumer made his plea to extend and reform the program in front of a Lindenhurst resident’s home that had been damaged by superstorm Sandy in October 2012. Rhonda Verrier, the homeowner, said her flood insurance costs have gone up “substantially” since Sandy. But, she said, the government needs to continue the program or costs will get worse.

“We need to keep government backing and not have the private sector come in,” Verrier said.

Schumer, the Senate Minority Leader, also called for stricter controls on attorneys who defend insurance companies against homeowners and stricter rules that root out “bad actors” who deny or “lowball” homeowner claims.

Michele Insinga, who heads Adopt a House, a Lindenhurst-based nonprofit advocating for Sandy victims, said she supports Schumer’s proposals, particularly on the “unconscionable” lawyers, insurance companies and engineering firms that she said “willfully underpaid claims through fraudulent actions, that our families are still dealing with.”

The flood insurance program should “remove and discipline any who engage in these practices to defraud policyholders, so to prevent that from ever happening again to any disaster victim,” she said.