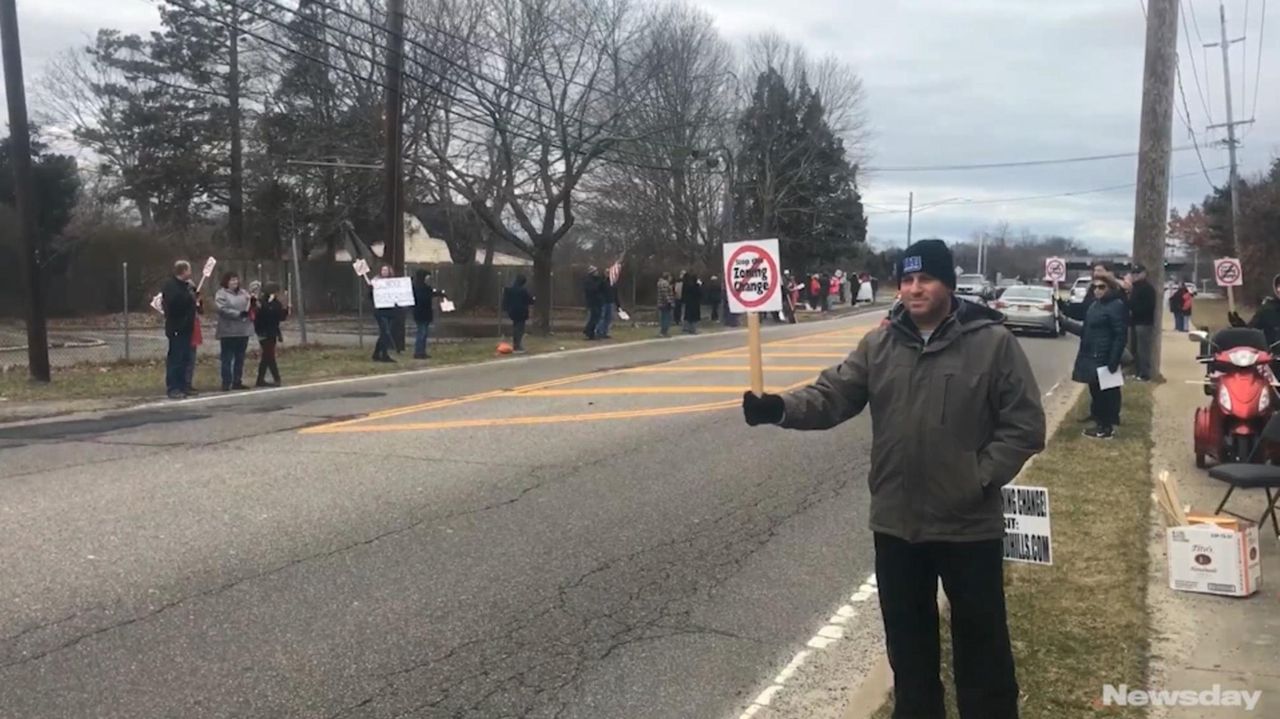 Dozens of Sayville residents gathered Sunday in protest outside the former Island Hills Golf Club, where a Plainview developer is proposing a 1,365-unit luxury apartment community.

Cousins Gregg and Mitchell Rechler of Rechler Equity Partners, have said they want to build the more than $500 million complex to attract “unapologetically suburban renters.”

Many nearby residents said such a massive apartment complex has no place in the midst of a residential area. Opponents have raised several concerns, including the visual impact of three- and four-story buildings, traffic congestion and some residents’ opinion that renters are not good for the community.

“I’m here to make sure that I help keep the fabric of the community intact,” said protester Kevin Shapiro of Bohemia, at the gathering along Lakeland Avenue in Sayville. “I’m also here for other concerns, such as traffic on the Oakdale-Bohemia merge. I’m concerned that this will bring, en masse, approximately 400 kids to Connetquot school district. I’m concerned about the environmental impact and I’m concerned about the Sayville downtown.”

Rechler Equity Partners applied in March 2017 for a zoning change, which would require town officials to approve a switch from the current residential district to a planned development district.

Opponents said they have collected thousands of signatures online and on paper urging town officials to reject the rezoning, with many describing the project as the equivalent of dropping a mini-city into an otherwise residential area.

“I just don’t see it as smart planning,” said protester Brian Kell of Sayville on Sunday. “Isn’t the idea of smart planning that you build these apartments downtown where younger people and empty-nesters want to live so they can be part of town life? You can’t walk to the train station [from the project site], you can’t walk to downtown.”

The Town of Islip has been named lead agency overseeing the proposal, and a Rechler spokesman said Sunday the firm is waiting for the environmental review process to begin.

If approved, the project — to be called Greybarn Sayville — would include a yet-to-be-determined portion of affordable housing units.

The company’s target is young professionals or retirees looking to downsize their living situation while gaining the amenities the rental facility would offer. Greybarn’s offerings are to include outdoor swimming pools, indoor and outdoor community spaces, and a walkable, campuslike setting.

“We are committed to transforming this distressed piece of property into a welcomed asset for the Sayville community,” Gregg and Mitchell Rechler said in a statement issued Sunday. “We are wholeheartedly committed to following the town’s comprehensive and transparent process that will provide extensive opportunity for the community and other stakeholders to weigh in and provide comment.”

Rechler officials have said they are considering ways to address concerns of residents, including a potential shuttle service to downtown Sayville to offset traffic from the development, a walking path around the development that would be open to the public and putting the taller buildings in lower areas to minimize obstructed views.

Opponents have said those suggestions don’t offset the impact of such a large project.

“This is pushing me to where I’ll move,” Sayville resident Kathy Flockhart said. “I’ll just get out of here. And I love Long Island.”