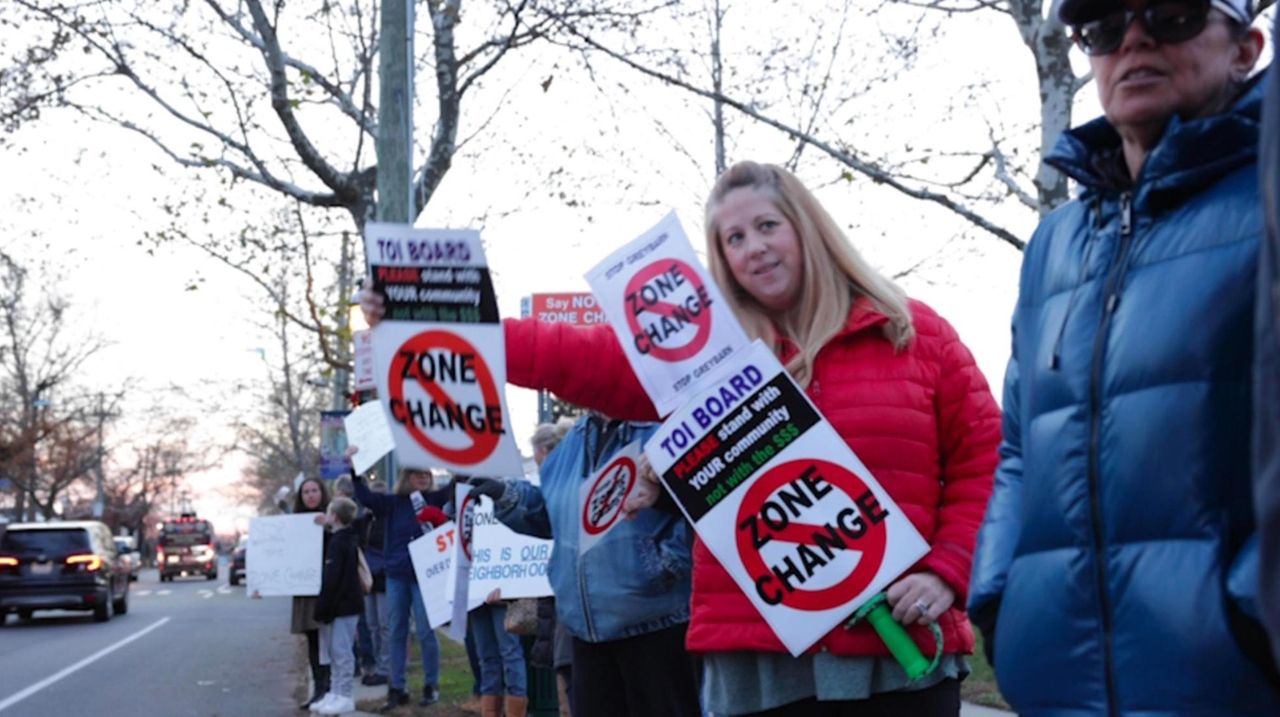 Sayville residents protested a proposed Greybarn apartment complex at the site of a former golf course. Among their concerns: traffic and the burden on the school district. But the head of ABLI - Association for a Better Long Island - said Long Island is in desperate need of diverse housing options. Newsday's Cecilia Dowd reports. Credit: Newsday / Steve Pfost; Kendall Rodriguez

Dozens of Sayville residents rallied before an Islip Town Board meeting Wednesday night to continue protesting a proposed apartment complex that would build more than 1,300 units at a shuttered golf course.

At the public hearing Wednesday about 70 residents discussed the draft environmental impact statement for the Island Hills golf course on Lakeland Avenue, which has been closed since 2015. Rechler Equity Partners, the real estate developer behind the Greybarn brand, wants to transform the 114-acre property into a luxury apartment complex.

During the four-hour meeting, several residents voiced concerns over environmental and density impacts, and said they feared the hamlet’s character would change. The meeting room was filled to capacity, and several dozen were put in the overflow room.

Developers have proposed a complex with 1,365 units, including 217 designated for affordable housing, the draft environmental impact statement shows, but they will have to persuade the town board to approve a zone change. The property’s current zoning allows only approximately 80 single-family homes.

Progress for the complex has been inching forward since 2017 when plans were first submitted. Since then, developers have met with hundreds of residents and stakeholders to refine the project, Rechler managing partner Gregg Rechler told Newsday. He said developers will weigh the feedback shared at the Wednesday hearing as they prepare a final proposal report.

Even as the Rechler group said it strives to introduce community-centered housing to Long Islanders, Sayville residents remain largely unconvinced.

"It’s too dense," John Tafe, who opposes the project, told Newsday. "It will increase the population by nearly 20%. It’s going to add traffic."

Stephen Hendrickson agreed with Tafe. At the hearing, the Sayville resident and volunteer firefighter raised concerns over the strain the added residents would put on services, including the fire department.

A handful of people who spoke in favor of the proposal were heckled. Supervisor Angie Carpenter reminded the crowd several times to remain polite and civil.

East-West Industries president Teresa Ferraro spoke in favor of the development and pointed to the need for amenity-focused housing on Long Island. She fears the lack of apartments will push young working professionals out of the region.

Rechler feels confident that residents of the complex would boost Sayville’s local economy and become lifelong residents. An estimated $2.9 million in sales tax is expected annually for the hamlet, paperwork filed with the town shows.

It’s not clear when the proposal will be submitted before the board again but public comments will be accepted through December.