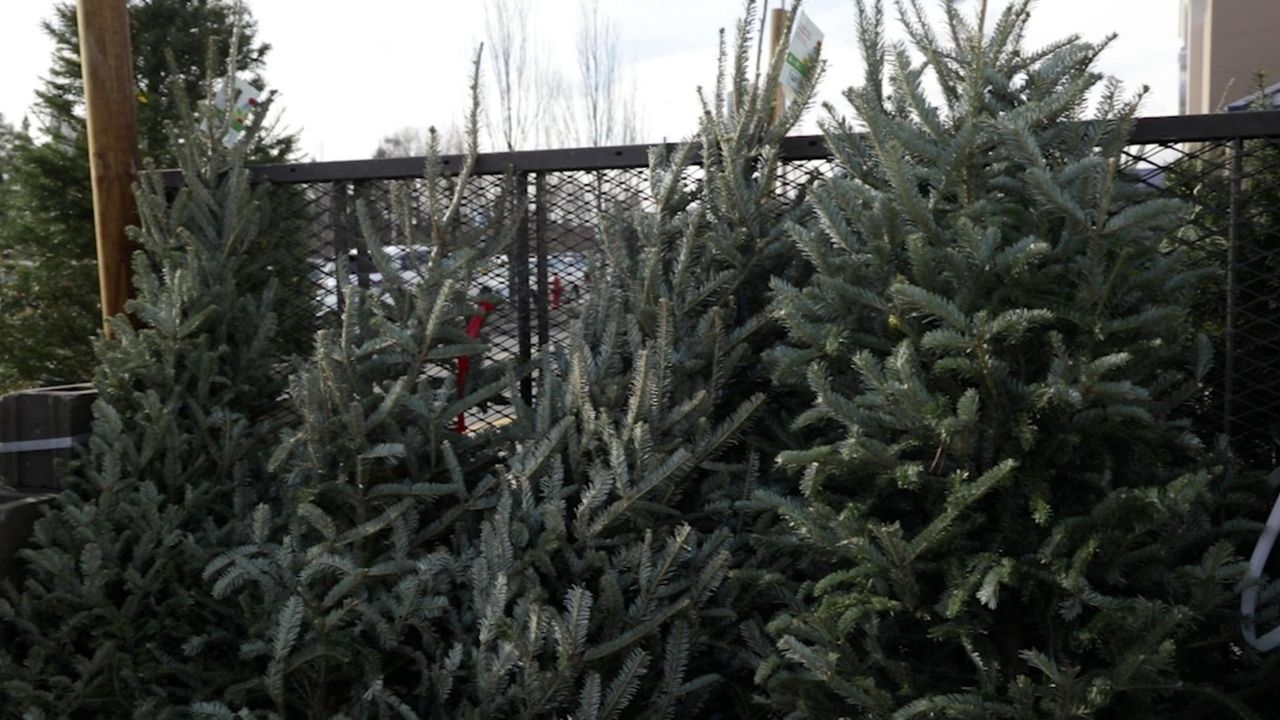 Sen. Chuck Schumer (D-N.Y.) called for $17.5 million in federal funding Monday to help New York stop the spread of the spotted lanternfly. Schumer said eggs of the spotted lanternfly, which have a taste for grape vines, fruit trees and local forests, might have hitched rides to Long Island on cut Christmas trees trucked in from out of state. Credit: Newsday / Yeong-Ung Yang

Holiday boughs could be infected by a Grinchy invasive pest that might devastate local crops, government and farm officials warned Monday.

Eggs of the spotted lanternfly, which have a taste for grape vines, fruit trees and local forests, might have hitched rides to Long Island on cut Christmas trees trucked in from out of state, Sen. Chuck Schumer (D-N.Y.) said Monday during a news conference at a Lowe's Home Improvement store in Garden City.

A live spotted lanternfly and several dead ones were found at a Deer Park nursery this fall, in a shipment that originated in a quarantined area in Pennsylvania. State and local farm officials fear the insect could cause widespread devastation in New York's agriculture and tourism industries if the insect proliferates here, and have asked the public to report any sightings of the moth-like insect.

Schumer has called for $17.5 million in federal funding to help New York stop the spread of the spotted lanternfly. Schumer, the Senate minority leader, said the United States Department of Agriculture already has committed $17.5 million in Pennsylvania to research the insect, which is native to Asia and has no natural predators here.

"I'm asking for the same amount of money to go to New York," Schumer said, holding a cut Christmas tree he dubbed "Ralph" and a glass-covered specimen of the insect.

While the insect is harmless to humans, Dan Gilrein, entomologist with Cornell Cooperative Extension of Suffolk County, said it can overwhelm trees and crops. "This is a serious pest we're very concerned about," he said.

With additional money, there could be detection and monitoring programs to search around the tree-of-heaven invasive species, which are spotted lanternflies' favored food, Gilrein said. There are also ongoing studies into biological controls for the pest, like bringing in a species of wasp that doesn't sting humans but preys on lanternflies.

With a Long Island agriculture industry worth $240 million a year, Long Island Farm Bureau administrative director Rob Carpenter said the pest "can cause tremendous devastation to our industry." That's true not only of grapes, but the burgeoning hop industry used in making local craft beers.

The spotted lanternfly, a voracious eater first found in the United States in Pennsylvania in 2014, can decimate crops by sucking out their sap.

Gilrein said egg sacs look like inch-long smudges of mud, and are laid on just about any surface that's brought in from an infected area. Eggs hatch in April and May as nymphs with white-spotted black bodies, later developing red mottling under white spots.

Adult spotted lanternflies can be about 1-inch long and a half-inch wide. The insect’s wings are speckled, dotted and striped in red, yellow, white, black and brown.

Schumer said Christmas trees that come from nearby states and are then sold on Long Island can increase the odds of the spotted lanternfly spreading across the region.

A USDA spokesperson said the department has been working with New York officials to support spotted lanternfly detection, response and prevention, including $461,868 this year. "We are ready to put whatever additional funding Congress provides to good use to combat this invasive pest," spokesperson Abbey Powell said in a statement.

The spotted lanternfly has two sets of wings and can walk, jump or fly. It feeds on plant sap, which can stress plants, making them vulnerable to disease and attacks from other insects. The lanternfly also excretes large amounts of sticky "honeydew," which attracts sooty molds that interfere with plant photosynthesis, hurting the growth and fruit yield of plants, officials said.

The insect can affect grapes, hops, almonds, apples, cherries and several varieties of trees, including oak, pine, poplar and sycamore. Sightings of the insects or their egg masses can be reported by sending photos to spottedlanternfly@dec.ny.gov.