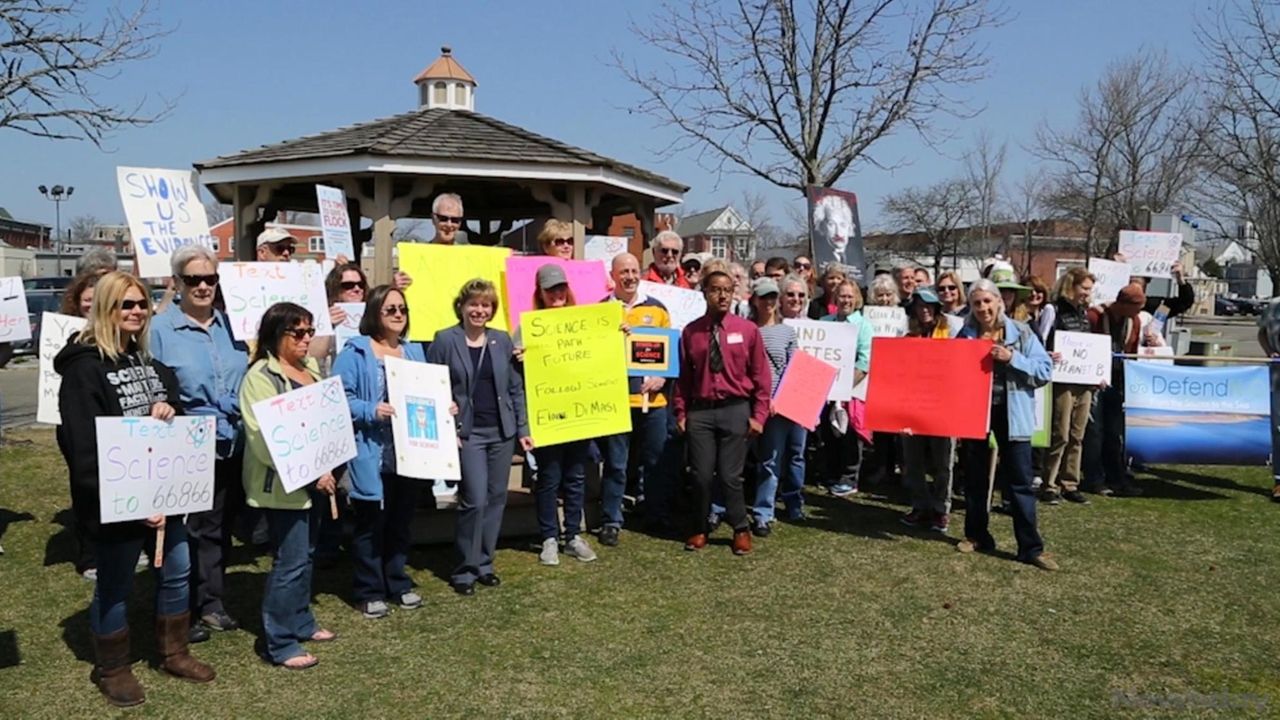 A March for Science was held at the Peconic Riverfront Park in Riverhead on Saturday, April 4, 2018.  Credit: Barry Sloan

Scientists and their proponents gathered in cities worldwide Saturday to advocate for public policy backed by evidence and for legislative action on climate change and the environment.

The second annual March for Science brought marchers to the streets of New York City, Riverhead and other towns and cities across the country to display unified support for the natural sciences in defiance of a president many view as hostile to them.

“Science makes America great,” Bill Ulfelder, executive director of the Nature Conservancy in New York, said to the crowd gathered in Washington Square Park before the march through lower Manhattan.

“We believe in the power of science to solve the challenges of our time,” he said.

Some 75 miles away, a crowd of about 60 people marched through the streets of Riverhead, within sight of the Peconic River, holding signs supporting clean air and diabetes research and reading “Science, not Silence.”

President Donald Trump’s skepticism of climate change and his proposal to slash federal spending on scientific research were front of mind for many of the protesters, including the roughly 1,000 people who snaked down Broadway on one of the first warm, sunny days of the year.

“They put the fox in charge of the hen house,” said Maribeth Whitehouse, a math teacher from New Rochelle, referring to Trump’s appointment of Scott Pruitt, who has opposed some environmental regulations, to the Environmental Protection Agency.

“Science is one of the bastions of hope of civilization,” said Whitehouse, 54. “To have it be under attack by one of the branches of government is outrageous.”

Trump has expressed doubt about the science underpinning climate change, describing it as a “hoax.”

As EPA chief, Pruitt has sought to roll back rules on water quality and fuel emissions, saying many past regulations went beyond the agency’s actual mandate. Environmentalists, however, say he has positioned himself as an ally to industries traditionally regulated by his agency.

“It’s kind of hard to believe because we live in a deep blue state,” he said. “We need in Albany more evidence-based policy.”

The rise of the anti-vaccination movement was a primary reason Alok Patel, a pediatrician at Columbia University Medical Center, joined Saturday’s march.

“We need to remind the world that there’s vaccine-preventable diseases that have been eradicated, but there’s still a threat of some of them coming back,” said Patel, 33, who wore turquoise scrubs and a white doctor’s coat.

An NYPD spokesman said he was not aware of any arrests at the event.

Other locations where marches were held include Washington, D.C., and Los Angeles; South Africa and Germany.

Among the marchers in Riverhead was Marypat Takacs, who credited science with saving her life.

Diagnosed with Type 1 diabetes in 2006, the 65-year-old Riverhead resident wears an artificial pancreas, which is a specialized insulin pump that helps regulate her blood sugar and monitor her glucose levels.

“Think globally, act locally,” McAllister said, as marchers greeted and talked to onlookers along the way. “The people we’re engaging, even in passing having coffee, can see the march and ask ‘Why is that important?’ It gets them thinking,” he said.

“It’s a demonstration of solidarity for environmental protection using the principles of science to guide us.”