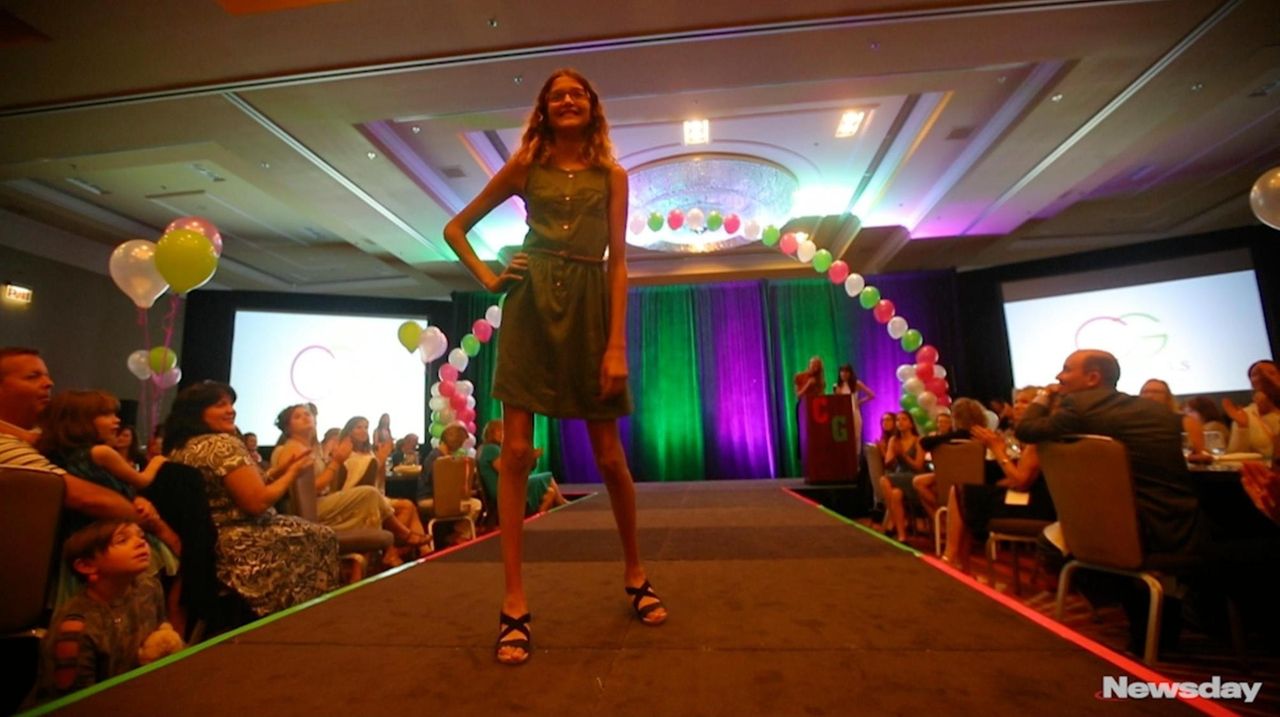 Curvy Girls, a scoliosis peer support group, held its fourth international convention at the Hyatt Regency in Hauppauge on July 10, 2018. The event culminated in a fashion show in which about 40 empowered girls with scoliosis walked the runway. Credit: Newsday / Raychel Brightman

Rachel Mulvaney was used to the back pain that came with having scoliosis, but the bullying from her classmates came as a surprise.

In middle school, other students targeted Mulvaney for the brace she wore 16 hours a day. Eventually she wore it only outside school.

“During gym, the girls would actually toss my brace back and forth like a volleyball,” said Mulvaney, of Mount Sinai. “It was very difficult because I did not know people my own age who had this condition.”

Years later, Mulvaney, 23, has a community of friends with scoliosis that she says has grown into a sisterhood. She, along with hundreds of young women with the condition across the globe, credits a Long Island-based support group, Curvy Girls, for creating such lifelong connections.

Mulvaney, vice president of the group, and more than 130 young women were in Hauppauge this week for the fourth Curvy Girl convention on the Island since it was founded in 2006 by Leah Stoltz, 25, of Smithtown. Tweens and teens celebrated their curves, camaraderie and a surprise visit from Victoria's Secret model Martha Hunt, who has scoliosis.

Hunt echoed the need for opportunities for girls with the condition to connect.

“I can relate to girls coming together and bonding over scoliosis because I come from a small town and didn’t know other girls that were going through scoliosis journeys,” Hunt said. She attended the convention's fashion show, where about 40 girls walked the runway, flaunting their decorated back braces and clothing that showed off their post-surgery scars.

Scoliosis is a curvature of the spine that typically begins during puberty. Girls are more likely to develop larger curves in the spine that require medical treatment, according to the American Academy of Orthopaedic Surgeons. Experts say groups like Curvy Girls, which has 104 chapters internationally, can provide important social benefits.

“Some children will withdraw from social interactions because of something that makes them different — especially having to do with their physical appearance,” said Dr. Phyllis Ohr, a psychologist and director of the Child and Parent Psychotherapy Services Clinic at Hofstra University. “It’s always helpful to have people who listen, who don’t judge and who validate your emotional experience.”

Elisabeth Keogler, of South Huntington said her daughter, Dana, 16, grew more confident because of the group.

"She’s gone from this quiet 7-year-old to child to speaking up," she said.

Dana Keogler and Sage Papile, also 16, bonded immediately during a meeting of the Curvy Girls Long Island chapter when they were 9 and among the youngest girls there. Now, they lead the chapter together and remain friends, despite their different personalities and experiences with scoliosis.

Dana Keogler describes herself as observant and laid-back, while Papile, of Manorville, says she has a talkative and outgoing nature. They both wore the same type of brace, though Keogler had a bad experience with it.

"It proves we all have different journeys, but we can still support each other through those journeys,” said Papile.

Jenine “Jenny” Elf, 26, hasn't worn a brace since she was 15 years old but continues to mentor girls with scoliosis. She flew to Austin, Texas, in 2016 to visit Ella Strickland, 14, after the two met at the 2016 Curvy Girls Convention. Strickland now sees her mentor as an "older sister."

Elf, who grew up in East Rockaway and now lives in upstate New York, remembers having few people to talk to about her condition.

“I’m always looking to empower girls to feel confident with their scoliosis," said Elf, who said she developed social anxiety during the 7th grade. “I never want anyone to experience the same thing I went through.”