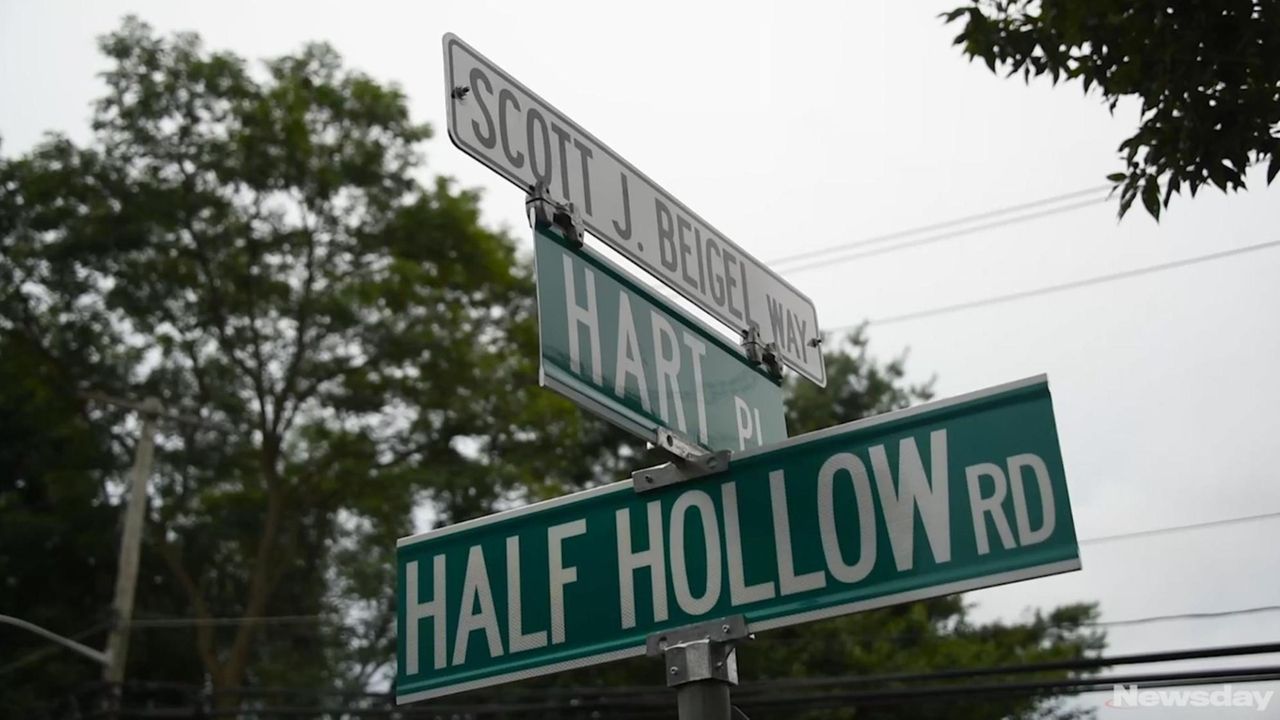 The 35-year-old Dix Hills native, a geography teacher at Marjory Stoneman Douglas High School, was one of 17 people killed on Feb. 14 when a shooter opened fire in the Parkland, Florida, school. He was shot while turning to lock his classroom door after guiding students inside for safety.

And on Saturday, Beigel’s family, friends and former students, along with state, county and local officials, gathered to ensure his death would never be forgotten, by dedicating Hart Place —the street he grew up on — in his honor.

“Someday when someone says, ‘Why is this street named Scott Beigel?’ there will be a powerful story to tell about a movement that started with his death and the death of young people who did nothing more than show up for school one day,” Lt. Gov. Kathy Hochul said at the ceremony Saturday. “It is in their name that we carry on this movement, this fight.”

The mass shooting sparked a nationwide student-led movement that included rallies across the United States and Long Island calling for stricter legislation on guns. On March 24 thousands of people across the Island joined in the national March for Our Lives event, and some student groups traveled to Washington, D.C. to press lawmakers to take action.

Beigel’s mother, Linda Beigel Schulman, father Michael Schulman and sister Melissa Zech, along with her husband, children and other family members, gathered Saturday for the dedication.

“I think it is a great honor,” Beigel Schulman, who still lives on Hart Place, told Newsday before the ceremony. “My son probably is smiling, wherever he is, from ear to ear. I will never forget, but this is going to be something that even if for a second it goes out of my mind, I’ll drive down the street and it’s there.”

During the ceremony she called for gun law reform, including a nationwide assault rifle ban and passage of a “red-flag bill” in New York State, which would allow school officials to ask a judge to block students’ access to guns if they show signs that they could be a danger to themselves or others.

“It haunts me daily how this terrible and preventable shooting should never have happened,” Beigel Schulman said, calling for everyone to get out and vote in November to effect change.

Parkland school shooting survivor and founder of March for Our Lives Cameron Kasky, 17, said he was glad to be there to support Beigel’s family.

Beigel was Kasky’s camp counselor when he was 7 and 8 years old, and also his fifth-grade teacher.

“Scott’s memory lives in the fact that he was able to positively touch the lives of so many young people, and people like me who grew up with him, who were able to gather so many of our values and principles from the high standard that he set as a person,” Kasky said. “But sometimes materialistic things are nice, and sometimes there being a street is super important, because now his memory is ingrained and this street will forever represent such a great person.”