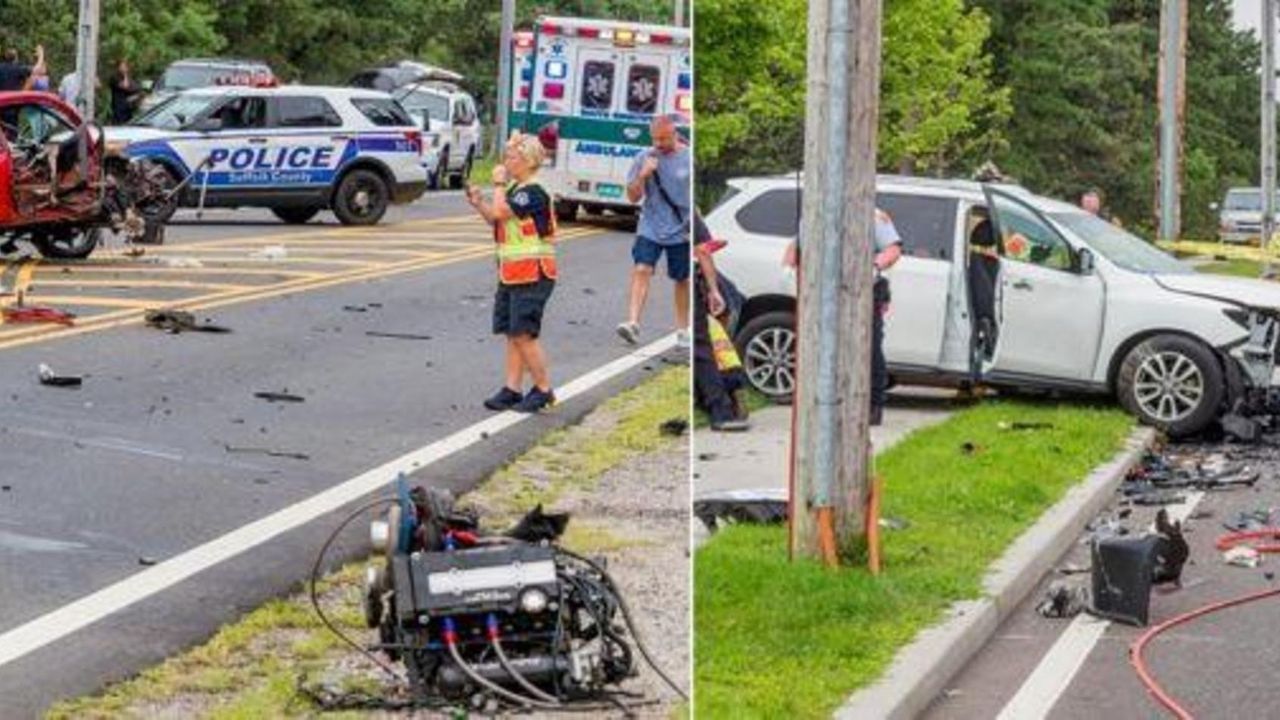 Three people died and four others, including two children, were rushed to the hospital following a head-on collision in Medford on Monday when one of the drivers veered across the yellow lines, Suffolk police said.

Dominick Lopez, 20, drove into the northbound lane of Station Road just before 4:30 p.m. and slammed into a 2016 Nissan Pathfinder carrying five members of a family, killing himself, his passenger and a grandmother in the Nissan, police said.

Lopez, of Shirley, and passenger Derek Buffa, 23, of Mastic Beach, were ejected from their 1995 Honda Civic and died at the scene, just north of Tarpon Avenue, police said.

Aida Cardenas, 67, of Selden, a rear passenger in the Nissan, was pronounced dead at Brookhaven Memorial Hospital Medical Center in East Patchogue, police said. Her 11-year-old grandson was airlifted to Stony Brook University Hospital for nonlife-threatening injuries and her 1-year-old grandson, who suffered scratches, was taken by Medford Volunteer Ambulance to the hospital, police said.

Hugo Atiencia, 41, of Bellport, the Nissan driver, and his wife, Dianna Arizago, 33, of Bellport, the front passenger, were also taken to Brookhaven Memorial, where they were treated for injuries that were not life-threatening, police said.

The force of the crash sent debris across the lanes and shut down Station Road for hours as Fifth Precinct detectives investigated. At the scene, an engine sat on one side of the road, a car door on the other, and a tire lay in the street.

“It was horrific,” said Chief Gregory C. Miglino Jr. of the South Country Ambulance Company, who responded with Medford firefighters and pronounced the Honda’s occupants dead.

“The challenge in a scene like this is time, to get the patients to the best level of care as quickly as possible and correct whatever the life-threatening ailment might be,” he said. “In this case, a few of the victims had to be cut out of the vehicle and that was done very quickly. The fire department did an excellent job.”

Bellport resident Tony Lomuto, 59, was having coffee in his backyard when he heard a loud bang, ran outside and saw the crash. Lomuto said his wife called 911, while he redirected traffic away from the scene.

Nicholas Guggino, 22, of Mastic, a friend of both men who died in the crash, said they were all part of a campaign to bring a dedicated drag-racing track to Long Island.

Lopez and his father built several drag cars over the years as a hobby, Guggino said, and Buffa was well known in drag-racing circles because he built a business, LI Speedwerx, to modify vehicles.

Lopez had recently installed a roll bar cage in the Honda, his favorite drag car, to qualify it for drag races that require vehicles to stop within nine seconds, the friend said.

Guggino said Buffa’s business was not far from the crash scene, and he surmised the two were taking the Honda out for a test drive with the new roll bar cage.

But he said he does not understand how his friends were ejected when the Honda contains six-point harnesses, and he does not believe the two were speeding because the men confined any display of their vehicles’ power to racing tracks. Police are still investigating the cause of the crash.

Guggino called Lopez, who he said worked with the auto parts supply chain Pep Boys, an outgoing and “genuine guy.” He added, “If you ever needed anything, you’d give him a call and he’d be at your door.”