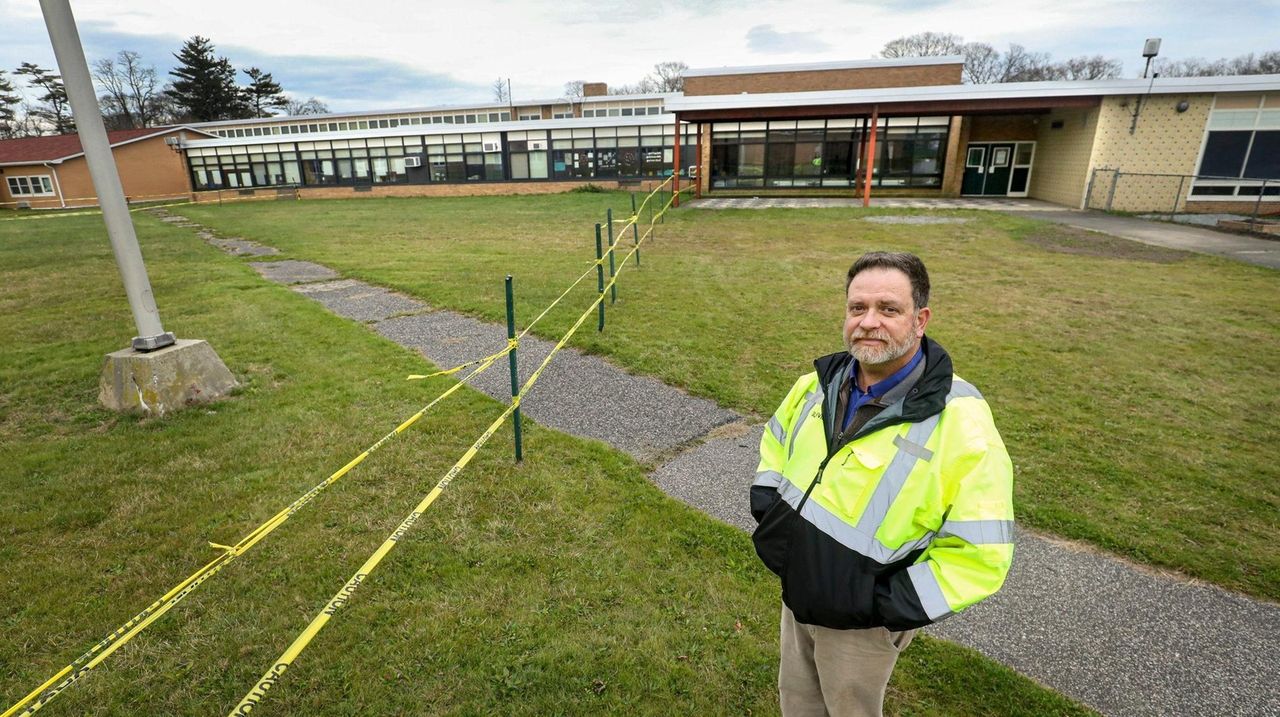 Director of facilities of the Wyandanch Union Free School District, Montgomery Granger, spoke to Newsday on Friday about the district's plans to end the use of failing cesspools at two schools and hook up to the Southwest Sewer District. Credit: Newsday / John Paraskevas

The Wyandanch school district plans to end the use of failing cesspools at two schools and hook up to the Southwest Sewer District.

The district is proposing to connect the Martin Luther King Jr. and Lafrancis Hardiman elementary schools, as well as the nearby administration building and bus depot. Suffolk County Legis. Jason Richberg (D-West Babylon) has proposed legislation that would have the county waive sewer hookup fees for schools that are under a state fiscal monitor. Wyandanch is currently the only school district in the county under a state monitor, and its estimated fees for hooking up are $531,240.

During a hearing last week on the legislation, district Superintendent Gina Talbert described how heavy rains and rapid snow melt can overwhelm the septic system at the MLK school, causing a "horrific backup of sewage" through the floor drains in classroom bathrooms. She said an area between MLK and Lafrancis Hardiman that was used as a playground had to be cordoned off because sludge would seep up onto the field and produce a "very foul sewage smell."

In 2015, the 12 cesspools for MLK were determined to be "past their useful life," Talbert said. Montgomery Granger, director of facilities for the district, said the area of the former playground is also in danger of collapsing. The cesspools date back to when MLK was constructed in 1956, he said.

"I don’t think they’d been monitored or maintained, so it was just a ticking time bomb," Granger said.

Talbert said the district was not in a financial position to replace the cesspools at the time but did eventually seek to hook up to the nearby sewer line. The Town of Babylon in 2014 invested more than $15 million into the construction of a nearly three-mile long sewer line down Straight Path in what was the first significant extension of the Southwest Sewer District since the 1970s.

The district’s state permit to connect to the system was set to expire in 2019, but it received an extension. The new permit expires in October 2021.

Granger said that since the cesspools were pumped out in 2016, workers have been monitoring the levels and though there have been some backups due to blockages, there have been no incidents of sludge leaking out due to the system failing.

Talbert said construction of the sewer line connection is estimated to cost $1.2 million to $1.8 million, and while the project should be eligible for state aid, the district would have to put the money out and be reimbursed later.

State monitor Al Chase said at the hearing that a potential $9 million cut in state aid "still looms large" and would put the district in "an untenable position." As a result, State Sen. John Brooks (D-Seaford) and State Assemb. Kimberly Jean-Pierre (D-Wheatley Heights) have secured $500,000 each toward the construction of the sewer line connection.

Brooks said that he, Jean-Pierre and Sen. Phil Boyle (R-Bay Shore) all agreed the state had to help with funding.

"This is a real health issue here," Brooks said. "This has to be fixed, there’s no question about it."