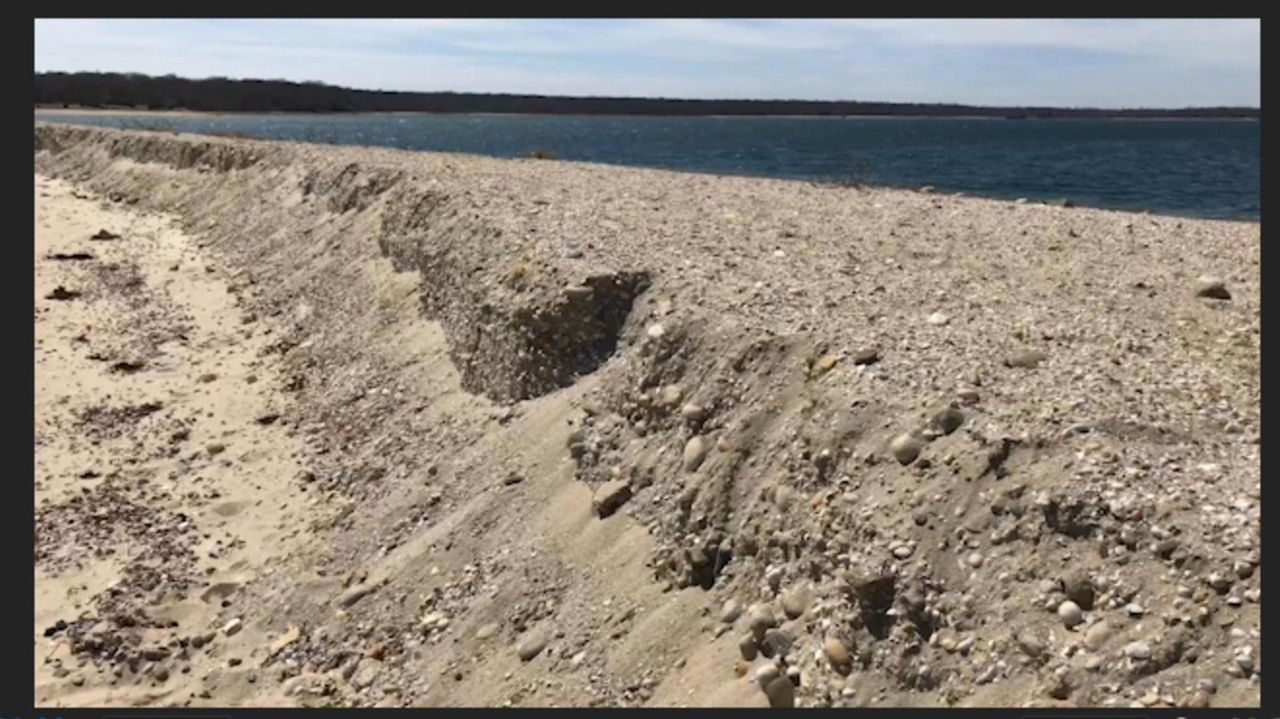 A fragile Shelter Island peninsula that protects more than $1 billion of real estate in Coecles Harbor is in need of a stabilization plan. Town officials are considering a 2,000-foot-long rock wall to absorb wave energy and protect the harbor. Credit: Newsday / Vera Chinese

A fragile Shelter Island peninsula that protects more than $1 billion of real estate and a harbor that is home to a thriving shellfish industry is in need of a potentially multimillion-dollar stabilization plan, according to town officials.

Reel Point, a skinny strip of land on the island’s eastern side, serves as a barrier for Coecles Harbor, its $650,000 per year shellfish industry, as well as an estimated $1.5 billion worth of real estate along its coast.

Shelter Island is otherwise mostly shielded by the Twin Forks from severe wave energy and erosion, but recent nor’easters and superstorm Sandy in 2012 have made Reel Point vulnerable, officials said.

Town officials are considering a remediation that calls for a 2,000-foot-long wall of cobbles along the eastern shore of the point, a project also referred to as a revetment. The project will also replenish sand along the strip’s western edge and raise the point’s spine to 15 feet above sea level.

The rock wall would absorb wave energy coming from Gardiners Bay, as there is a direct line of open water from Reel Point to Point Judith, Rhode Island, according to town engineer John Cronin.

“This is a particularly unique area of Shelter Island because of its orientation,” he said.

The town, along with the nonprofit Peconic Land Trust, which owns Reel Point, has commissioned the Westhampton Beach-based environmental engineering firm First Coastal Corp. to draw up construction plans for the project. When those plans are complete, officials will have a fuller picture of the project’s cost, but early estimates have put it as low as $700,000 if much of the work is done by town workers to as high as $4 million to contract it out.

The town and the land trust have worked together since superstorm Sandy to place dredge spoils along the shore, plant beach grass and install fencing to try to stem the effects of erosion, but the successes have been only temporary.

“The work we are doing now with the engineers and the town will hopefully provide a realistic solution to help stabilize this important natural resource for the community,” said Matt Swain, senior stewardship manager for Peconic Land Trust.

The revetment project would “greatly reduce” the amount of sand that ends up in Coecles Inlet, Cronin said, lengthening the time between dredging. In addition to protecting the valuable waterfront properties, the area is also home to migratory birds, and Coecles Harbor has one of the largest eelgrass beds in the Peconic Estuary, Swain said.

The town and the land trust said once the cost is determined officials will consider all funding sources, including federal grants, private money or budget reserves to complete the revetment.

“We have to be prudent to get this thing done in a timely fashion,” Colligan said.