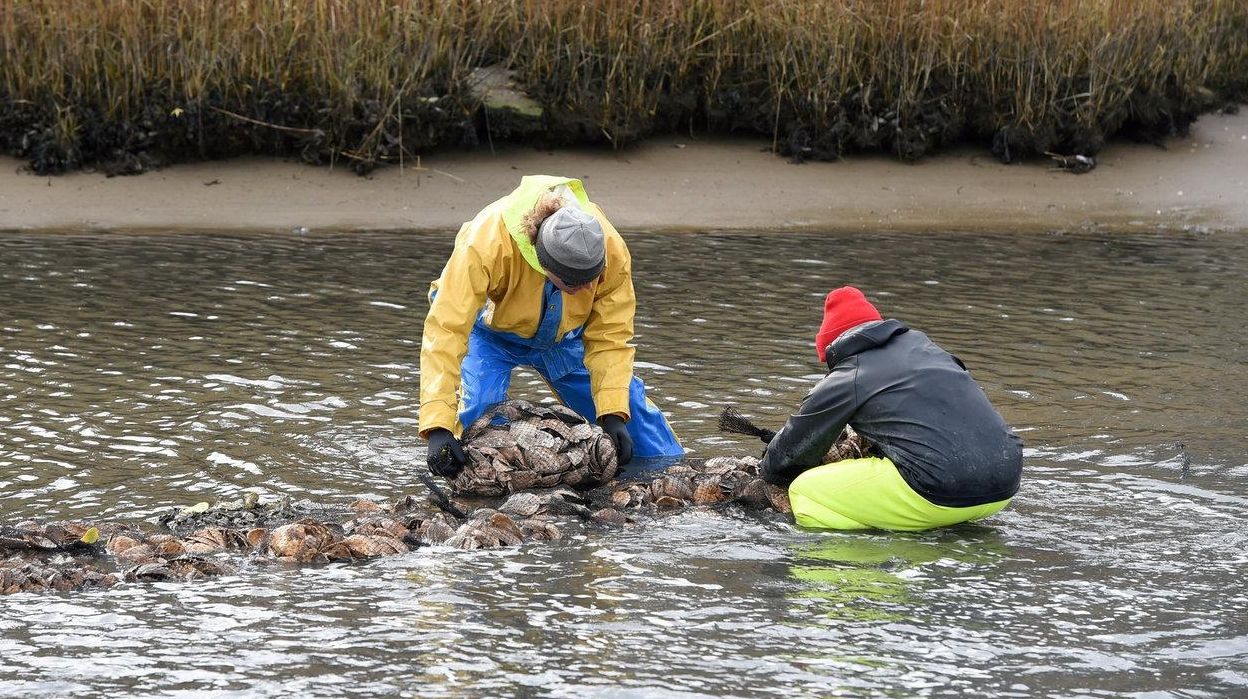 Man-made reefs seeded with more than 500,000 young oysters were laid in Shinnecock Bay Thursday in the region’s first initiative to create a complex habitat for shellfish production to filter and clean area waters.

The Shinnecock Bay Restoration Program, a joint initiative by Stony Brook University’s School of Marine and Atmospheric Sciences and the Institute for Ocean Conservation Science, recently received permits for the first-ever project on Long Island, the first such permits granted by the state Department of Environmental Conservation. The work is being funded by $4 million in private foundation grants and a smaller portion of state money.

“We want to see if we can bring back the oyster populations,” said Christpher Gobler, a professor at the Stony Brook School of Marine and Atmospheric Sciences, noting there are no natural oysters reefs extant around Long Island.

The first reef is being established in an area of Quogue Canal on the western end of Shinnecock Bay. There, a crew of eight, led by Michael Doall, a bivalve restoration specialist for Stony Brook University, worked in chilly waters under a gray sky to move scores of bags of shells — each dotted with young oyster spawn — into a 15-foot by 30-foot rectangle 20 feet from the shoreline.

In coming weeks and months, the reef will be filled in with the bags, with the expectation that young oysters seeded on the shells will grow by filtering phytoplankton from the water, and ultimately spawn new oysters.

“They filter water and create habitat and enhance the total ecosystem,” Doall said.

The plan is to construct up to four such reefs under the current permits. The reefs will be closely monitored to check oyster growth, spawning of new recruits and establishment of fish habitat. “We want to get as much information as possible to consider this a restoration technology,” he said.

When shellfish were plentiful around Long island, the large populations were effective in filtering bays and tributaries, accomplishing the task every three days, Gobler said. But with sharp declines in populations, particularly over the past century, water quality has suffered. Establishing reefs and restoring the populations could be an important future tool to addressing water quality issues, he said.

For months, the program has been collecting oyster and surf-clam shells from restaurants, festivals and commercial operations to store in the mesh bags to create the reefs. Oyster larvae need hard surfaces on which to settle and grow, and oyster and clam shells are ideal, Gobler said.

Oysters were cultured at Stony Brook’s Southampton marine laboratory, where the shellbags are placed in large tubs filled with the oyster larvae. Once the new oysters settle and grow to adequate size, the bags are moved to the reef.

The Shinnecock Bay Restoration Program is seeing success with a related project that put more than 2 million adult hard-shell clams in Shinnecock Bay waters in nearby Weesuck Creek in East Quogue. Gobler said that teams are already seeing an uptick in new clam production in the bay. “We feel good about the hard-clam restoration initiative,” he said. “Landings of clams have been going up each year, and populations are coming back.”