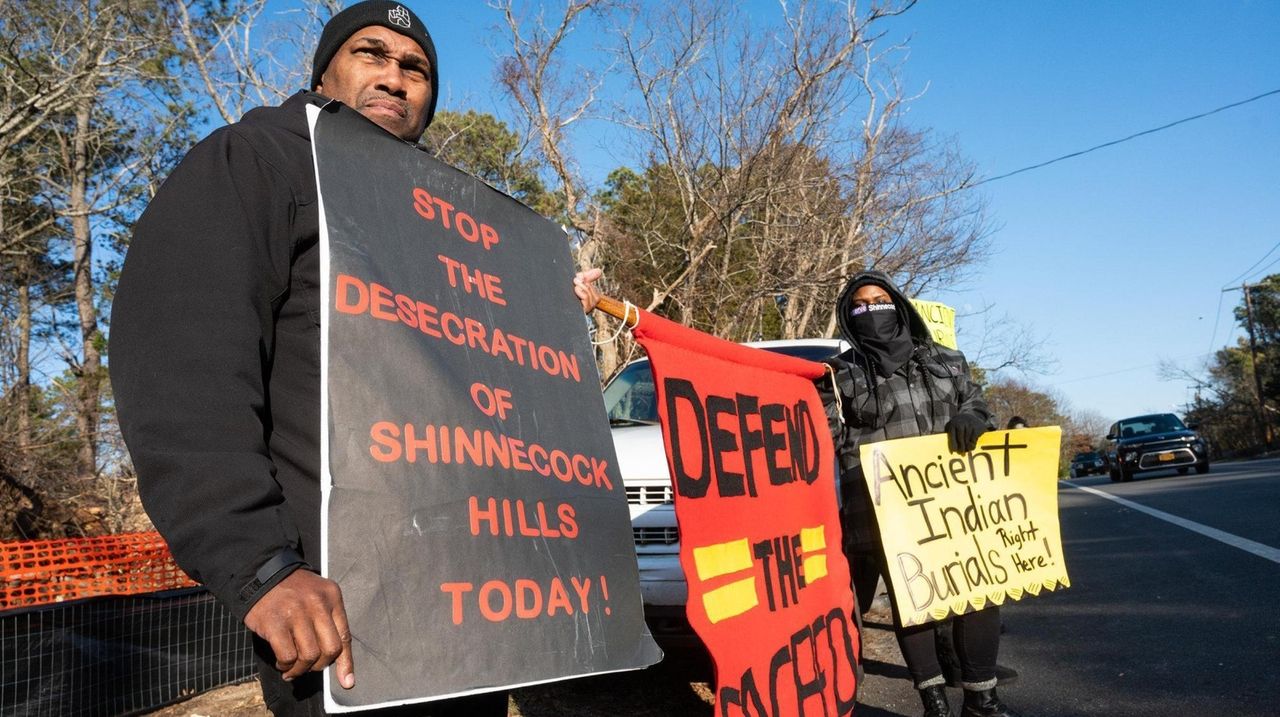 Members of the Shinnecock Indian Nation on Monday protested outside the construction site of a new home on Montauk Highway in Southampton, in an area the tribe considers sacred. Credit: Gordon M. Grant

Members of the Shinnecock Indian Nation and Southampton Town officials are working to pass a law protecting ancient burial grounds amid an ongoing protest at a construction site in an area the tribe considers sacred.

Tribal members have gathered since December outside a worksite on Montauk Highway in Shinnecock Hills and are calling on the town to issue a cease-and-desist order for the property. They have also posted an online petition and are displaying a protest photo on the tribe’s 60-foot electronic billboard along Sunrise Highway.

“We will work closely with [Tribal Trustee Chairman Bryan Polite] Bryan and the other leaders of the Shinnecock Nation to protect our culturally sensitive properties and establish new protocols to protect burials and other sacred sites, including a graves protection act and a cultural sensitivity map,” Schneiderman said in remarks delivered Tuesday during his inauguration ceremony. “We also will continue to acquire undeveloped lands in Shinnecock Hills, the sacred burial area of the Shinnecock people, whenever we can, whenever possible.”

A construction crew unearthed remains of a likely Shinnecock ancestor at a nearby site in 2018, sparking anger and protests from the tribe. The town later agreed to purchase and preserve the Hawthorne Road property, and the remains were reburied several months later. The issue was also highlighted in the recently released documentary “Conscience Point,” which followed the yearslong struggle of Rebecca Genia, who identified herself as the tribe’s grave protection warrior.

Genia, who has been protesting at the Montauk Highway site daily, said the tribe first proposed passing a grave protection law in 2003. Genia said she suspects developers have discovered remains before and improperly disposed of them, and is calling on the town to prevent further development in the area.

Schneiderman said the town has been in talks with the property owners to preserve the Montauk Highway property, but it “may not work out in this case.”

The property is in a state-designated Critical Environmental Area adjacent to the tribe’s Sugar Loaf Hill burial ground. Southampton Town authorized a subdivision of the property last year and in November issued a building permit for a two-story home. A private firm performed an archaeological survey of the property and found no “prehistoric” artifacts, according to a planning board resolution.

Genia expressed skepticism of the survey and said she unearthed an object she said could be an artifact within minutes of stepping on the property.

Polite, protesting at the site Monday, likened the construction in the Shinnecock's known burial area to building a condominium on a Colonial cemetery.