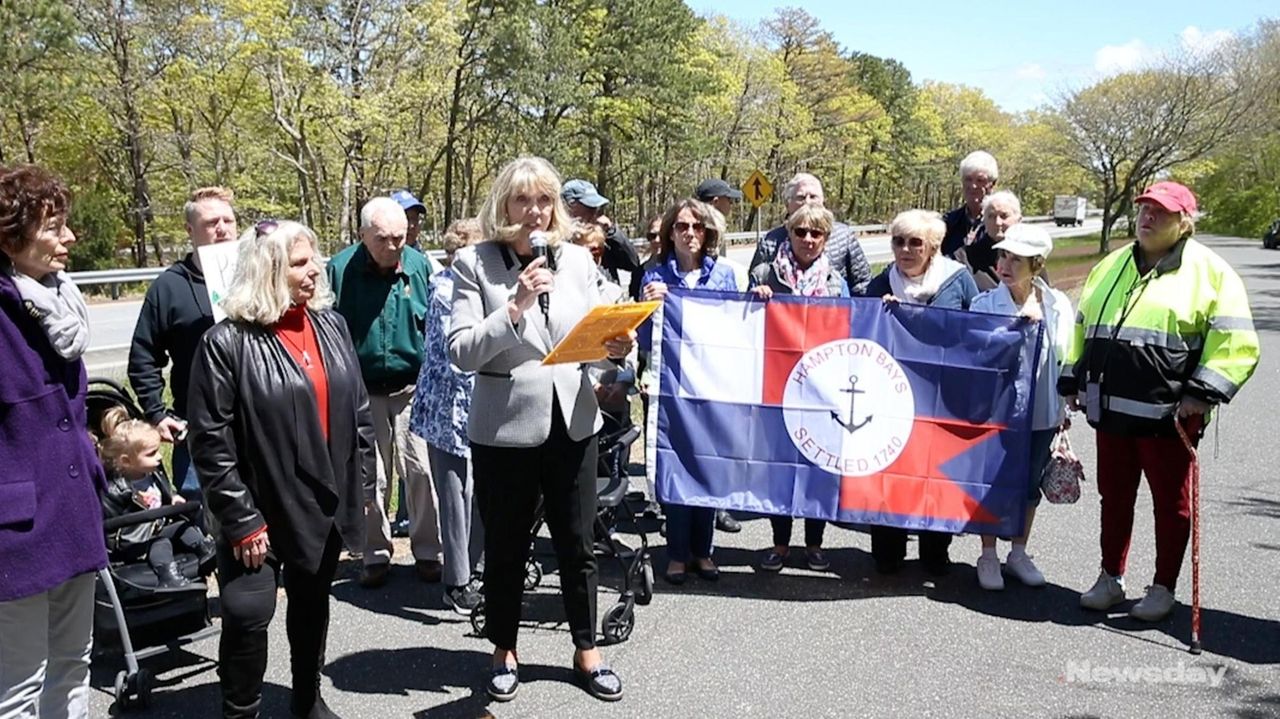 The tribe, which calls the structures “monuments,” said they are a needed economic development project and that they are within its rights to build them.

“We have the sovereign ability to do this project," said tribal trustee Lance Gumbs. "Everybody wants to make it some big, complicated thing. But it’s pretty simple to us.”

The two towers will be on tribe-owned land on the road’s shoulder between Exits 65 and 66 in both the eastbound and westbound direction, a route traversed by almost all those traveling to Southampton and farther east by car.

Southampton Town Supervisor Jay Schneiderman and other civic leaders rallied near the site Wednesday, imploring the Shinnecocks to pause the project.

The tribe, which plans to sell advertising space at the sites, began work on the structures about two weeks ago and has continued construction despite a Southampton Town stop-work order, claiming that as a sovereign nation it is exempt from local and federal laws.

It is not clear whether the state, which has a right of way on the land, will enforce federal highway laws. The federal Bureau of Indian Affairs told Rep. Lee Zeldin (R-Shirley) on Wednesday that the tribe has not sought approvals from the agency and that enforcement is up to the state Department of Transportation and the New York attorney general's office.

Officials with the state DOT have said the matter is under review, and a representative from the attorney general's office did not respond to a request for comment.

Schneiderman, acknowledging historical mistreatment of the Shinnecocks and the tribe’s desire to improve the financial well-being of its people, said he hoped it could find a different economic development project.

“I’m not going to pretend that the Shinnecock Nation hasn’t been mistreated," the supervisor said. “Their lands were stolen, their people were killed. It’s a horrible story.”

Still, he said the signs are out of character and will distract drivers. "Just because you can do something doesn't mean you should," Schneiderman said.

The town board has authorized spending $20,000 for legal advice on the matter, and more than 30 elected officials signed a letter last week urging the tribe to find a project that is “in keeping with our area.”

“They would be more fitting in New York City’s Times Square or in Las Vegas, Nevada,” the letter says of the monuments.

Many tribal members have said they disagree.

“I feel they’re great,” said Kristine Goree, a tribal member from Southampton, who observed the rally. “They are going to be a large contribution to our economic plans, and as a tribe, we’re excited.”