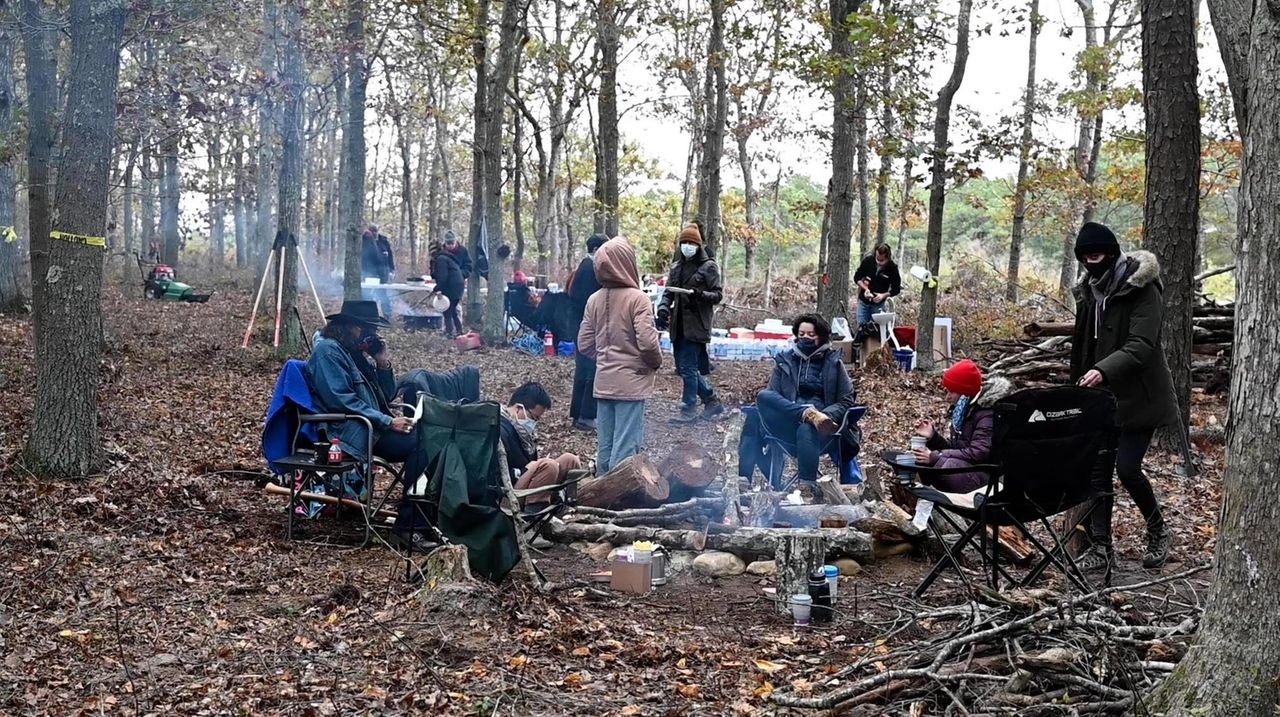 Members of the Shinnecock Indian Nation and their supporters prepped firewood and percolated pots of coffee Sunday morning as they readied for the first of a 26-day encampment protesting what they say are the state’s roadblocks to the tribe’s economic development.

The protest calls for the state to drop its court challenge to the tribe's 60-foot digital billboard along Sunrise Highway and to work with the Shinnecocks on their medical marijuana facility on tribal land in Southampton.

The Sovereignty Camp, located on tribal land near what will be the second of the Shinnecock’s two billboards, drew about two dozen attendees by early Sunday morning with many more expected to come. They plan to stay, sleeping in tents and campers amid the elements, until Thanksgiving, which the group considers a national day of mourning.

"This is what our land is about and has always been about," said Jennifer Cuffee-Wilson, one of the founders of the Warriors of the Sunrise movement who lived in a tent on the reservation for two years while searching for housing. "That’s how we live. We still live like that on the territory."

The group has raised more than $35,000 for the efforts through GoFundMe and direct donations, said Tela Troge, a member of the tribe and of the Warriors of the Sunrise advocacy group. The money will go toward feeding those in the encampment, which the group initially expects to run about $600 per day, and other supplies.

"Everyone here is committed to protecting and supporting Shinnecock sovereignty," Troge said. "Our spirits are up and we’re ready to do the hard work that we have to do to start educating … about our history and the way we’ve been oppressed by the Town of Southampton and the State of New York for centuries."

She added that members of the encampment will follow Centers for Disease Control and Prevention protocol for COVID-19 prevention.

Gov. Andrew M. Cuomo’s office had no comment on the protest on Sunday, but spokesman Jordan Levine told Newsday earlier this week that "we have and will continue to work with the Shinnecock Nation on a host of issues they have raised with the governor’s office."

Southampton Town Supervisor Jay Schneiderman said land preservation in the Shinnecock Hills is a top priority for the town and pointed to a building moratorium there and the recently adopted law outlining protocol for when remains are unearthed.

"We have no issue with the encampment other than to assist them with COVID prevention if desired," Schneiderman said Sunday. "We are also working with the Shinnecock leaders on meaningful economic development on the land where the encampment is planned."

Still, tribal members said they have been failed time and again by the government.

'Just show up': Starting Friday, 60 and older can walk in for COVID vaccine
1:30
Suspected Stop & Shop shooter charged with murder at arraignment
Iconic LI bakery setting up sweet shop in vacant store
1:21
LIer makes mask chains, feeds the hungry from 9/11 until now
'Happy Gilmore' caddie is now a psychiatry professor at Stony Brook University
Report: MTA spent $1.1 billion in overtime pay in 2020
Didn’t find what you were looking for?