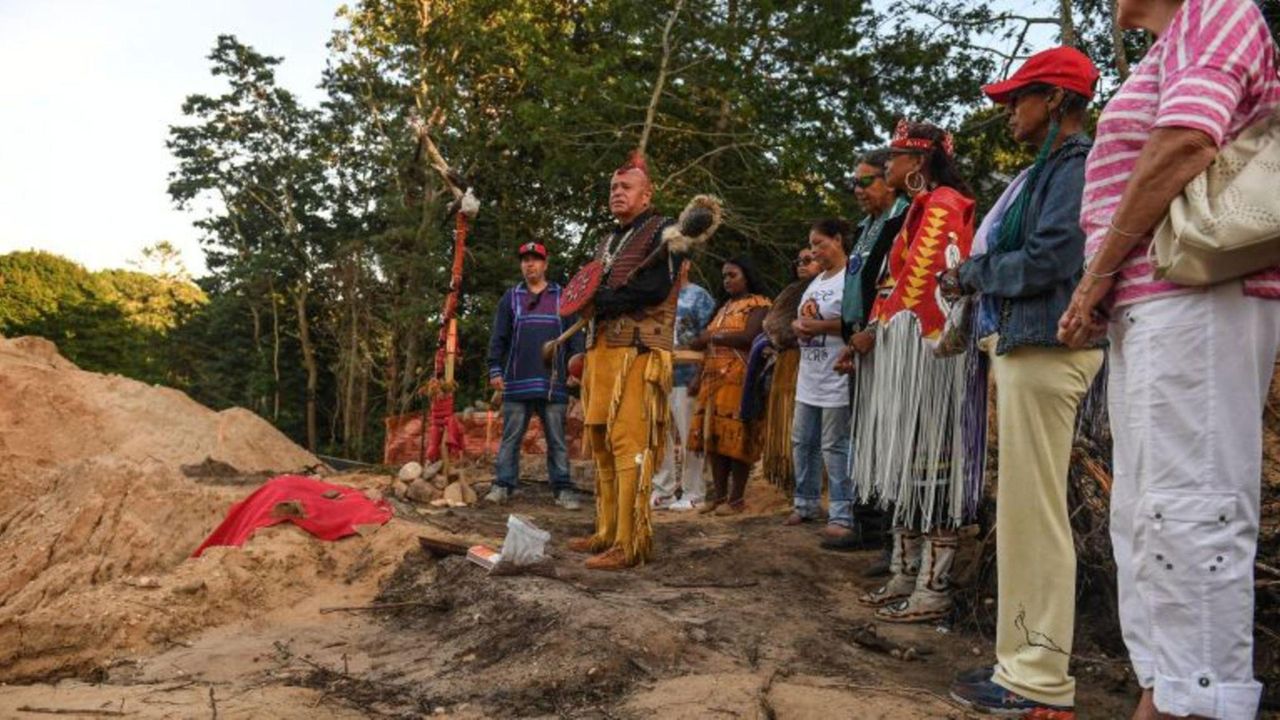 Members of the Shinnecock Indian Nation on Sunday prayed to their ancestors and the creator to fight a builder’s plan to resume construction on a Southampton site where a skull and bone were discovered last month, as well as to preserve ancient burial lands. Credit: Newsday / Vera Chinese

Shinnecock Indian Nation tribal members rallied at a Southampton site Sunday in hopes of raising $185,000 to help buy and preserve the land where human skeletal remains were discovered last month.

A skull, bone and glass bottle were found at the Hawthorne Road site on Aug. 13 during construction on a private home. The remains and the bottle were taken to the Suffolk County Medical Examiner’s office where an anthropologist determined them to be more than 50 years old. An archaeologist with the state Office of Parks, Recreation and Historic Preservation said the remains were “likely” of American Indian Origin, a claim tribal members had made since the discovery.

Members of the tribe, which is hosting its 72nd annual Powwow on its Southampton reservation this weekend, descended on the Hawthorne Road property Sunday evening to pray for a solution that preserves the land and repatriates their likely ancestor.

“All over our hills are our sacred burial sites,” said Rebecca Genia, a Shinnecock member who identified herself as the tribe’s grave protection warrior. “We are going to ask that our ancestors please help us.”

Southampton Town officials offered to buy the lot for $390,000 using money from its Community Preservation Fund, which is financed through a 2 percent tax on real estate transfers, according to tribal members and a representative of the builder.

Southampton Town Supervisor Jay  Schneiderman confirmed Sunday evening that the town made an offer for the “fair market value” of the property, but declined to disclose that price.

“It was more than the property was recently purchased for,” he said in a text message. “The town cannot legally pay more than fair market value.”

The owner of the property, whom the town has not identified, turned down the offer explaining that he had already spent thousands on permits and other costs, said the owner’s business partner, Michael White of Southampton-based Georgica Builders. The owner is asking for an additional $185,000 to cover costs associated with the project, White said.

“Hopefully, we won’t have to build there,” said White. “He’s the type of guy who would try to preserve it, it [the offer] is just too low.”

Genia said the tribe will conduct grassroots fundraising or perhaps take out a loan to raise the $185,000.

The owner indicated that construction could resume Tuesday though Genia said she hopes he will consider delaying any activity until all the money can be raised.

Shinnecock tribal members, supporters and members of neighboring tribes including the Mohawk and the Grafton, Massachusetts-based Hassanimisco Nipmuc gathered to sing and pray at the site and to bring attention to their cause. Any resolution, tribal members said, should come with better local protections for future discoveries of tribal remains.