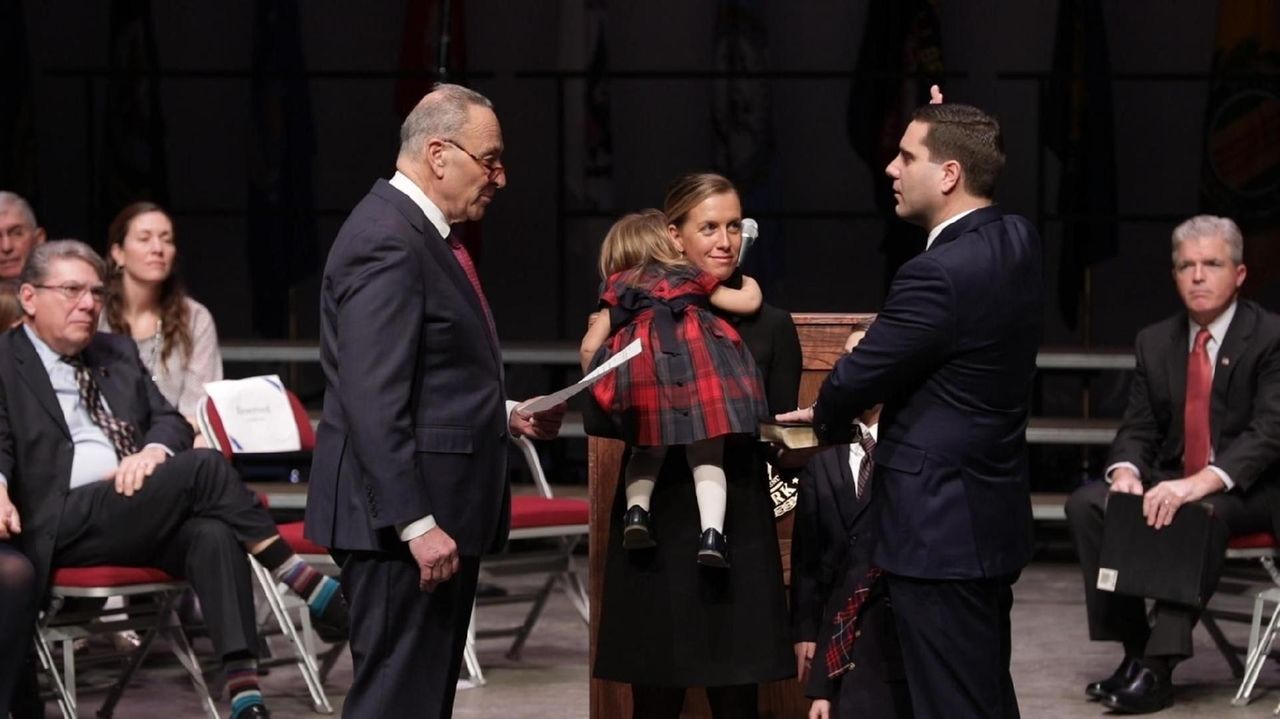 Former Suffolk Police Commissioner Timothy Sini was sworn in as the county's district attorney on Tuesday, Jan. 2, 2018. Sini, a Democrat who campaigned as a reformer, embraced adherence to ethics in a 19-minute address after his swearing-in by Sen. Chuck Schumer. Credit: Newsday / Yeong-Ung Yang

Sini, a Democrat who campaigned as a reformer, in his inaugural speech pledged that he and his prosecutors will be guided by a “culture of compliance with our legal and ethical obligations.”

Sini made an explicit break with the past, telling the many Suffolk prosecutors in the packed auditorium at Suffolk County Community College in Brentwood that they are “owed an apology” for the stain left on the office’s reputation by his predecessor, Thomas Spota, who resigned after being indicted in October on federal charges of obstructing justice and witness tampering.

Then he offered that apology to them himself.

“I am sorry that the reputation of the office has been damaged by the actions of the former administration,” he said, adding that he knows the pride they take in being prosecutors. “The previous administration threatened to take that pride away from you, by their corrupt acts and lack of moral judgment.”

Sen. Chuck Schumer administered the oath of office to Sini while Sini’s wife, Amanda, held both their daughter, Abigail, and a Bible.

Schumer, who 16 years ago spoke at Spota’s inauguration, extolled Sini’s middle-class upbringing in West Islip and his service in both the U.S. attorney’s office in Manhattan and the Suffolk police department.

County Executive Steve Bellone served as the master of ceremonies, and praised his protégé — Sini was an assistant county executive for law enforcement before he was commissioner — as a reformer to the district attorney’s office.

“When abuse of power and corruption in law enforcement have become evident, he chose to step forward,” Bellone said. Later, he said Suffolk law enforcement’s mission “has been overshadowed by self-dealing and chicanery.”

Sini, in the 19-minute address, focused in particular on complying with what is known as the Brady rule, which generally requires prosecutors to turn over evidence to defendants that is favorable to them.

“Brady is designed to help us,” Sini said. “It is not a burden. Our job is to seek the truth.”

Almost a half-dozen murder charges in the past year alone in Suffolk have been dismissed because of Brady rule violations. Following ethical rules ensures that convictions are both won legitimately and remain less vulnerable to appeal, he said.

“Everything you do is about the truth,” he told prosecutors. “This is not a sport and my assistants will not be judged as if it were. Our goal is not to score more points and win.”

As long as prosecutors do what they should, he said he will support them.

“We will have our assistants’ backs, unapologetically and unequivocally, when they do the right thing, win or lose,” he said.

Sini briefly outlined the areas where he hopes to make a historically safe county safer. He said he plans to steer opioid users into treatment while handling dealers “like murderers, when the law and the evidence permit it.”

He promised to go after MS-13 and other violent street gangs, those who commit environmental crimes and employers who illegally take advantage of their workers.

“I think it’s a new day for Suffolk law enforcement,” she said. She said tackling opioids and MS-13 can’t work unless her office and Sini’s work together. Both problems ignore the county line, she said.

As she spoke, Sini led his senior staff to a conference room upstairs at the college so they could immediately get to work.