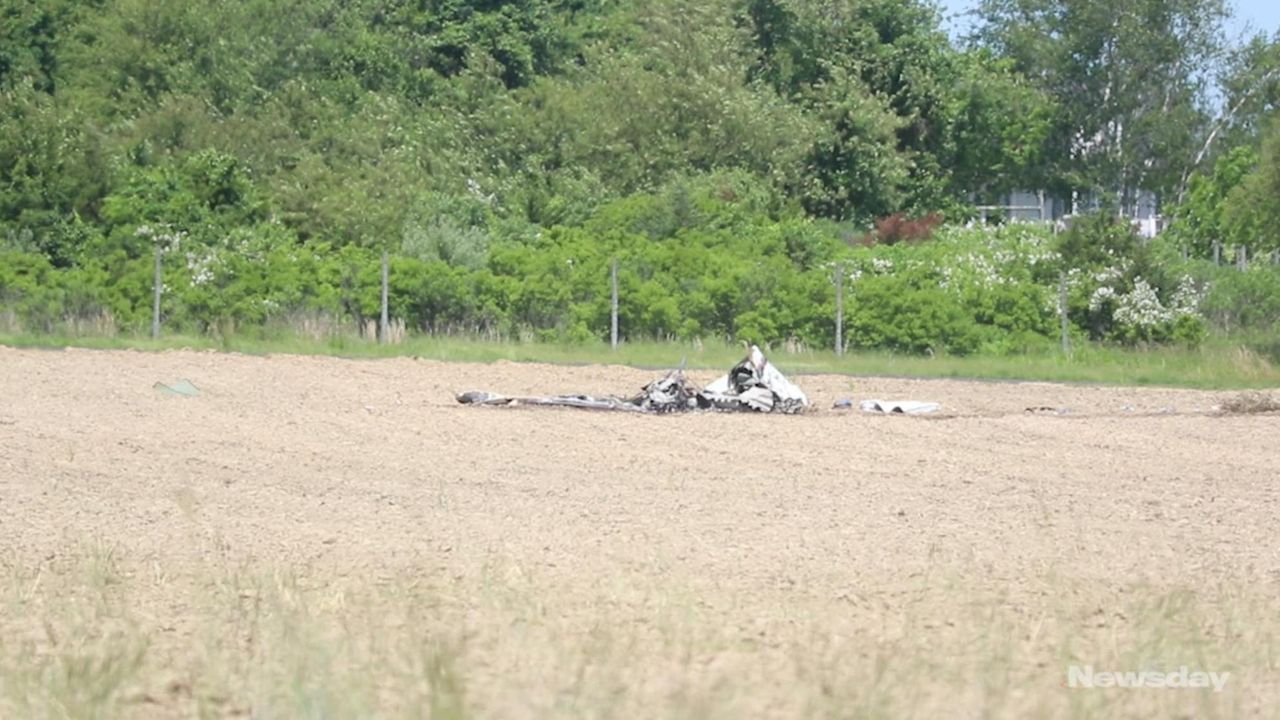 Brian Rayner, an air safety investigator for the National Transportation Safety Board, spoke Saturday about the two people who were killed when a small, single-engine plane crashed Saturday morning in a field at Harbes Family Farm in Mattituck after taking off from MacArthur Airport. Credit: Randee Daddona; Kenneth Cooper

The pilot and a passenger were killed when their small, single-engine plane experienced engine failure Saturday morning and crashed in a North Fork farm field, bursting into flames, officials said.

The Beechcraft A36 Bonanza took off about 9 a.m. from Long Island MacArthur Airport in Ronkonkoma, where it was based, and crashed around 9:15 a.m. at Harbes Family Farm in Mattituck, according to aviation officials.

A dog in the plane escaped the wreckage, and police believe a nearby farmer took the pet in, said Lt. Richard Perkins of Southold Town police.

Kenneth Cooper of Wading River, one of the first to reach the crash site in Southold Town, said he was driving east on Sound Avenue when he saw the plane flying north but at too low an altitude and realized it might be in trouble as there is no airport nearby.

“About a quarter mile in front of me, the plane came out of the sky at a very sharp angle, banked to the left — within 40 seconds I saw this giant plume of black smoke” after the plane sliced through "a bunch of scrub brush and trees" and hit the ground, Cooper said.

Southold Town Police Chief Martin Flatley said the unidentified victims were from Long Island but he did not know where.

MacArthur Commissioner Shelly LaRose-Arken confirmed the Beechcraft, a six-seat propeller craft, was based at that airport and not “a transient.” She declined to disclose to whom the plane is registered.

Southold Town Supervisor Scott Russell said the two occupants of the plane, a man and a woman, were flying to New Bedford, Massachusetts.

“The plane started to experience engine failure, circled once, tried to land in a farm field up in Laurel, and then ultimately crashed in the field,” Russell said.

After witnessing the plane plummet, Cooper drove down a dirt road to the crash site, spotting the propeller about 100 feet from the wreck.

“It was a pretty horrible scene," he said. “There were just personal items strewed all over the place,” including a cap and a pocketbook.

Cooper saluted the pilot for avoiding crashing into any homes, managing to stay aloft long enough to reach what appeared to be a freshly plowed field.

“The person who was driving the plane obviously cared about the residents and put it down as best he could in the safest place possible,” Cooper said.

The Riverhead Police Department received a call about the crash at 9:19 a.m., Perkins said.

Jamesport Fire Chief Mario Carrera said that when firefighters “arrived on the scene, pretty much the plane was fully engulfed and burning very well, almost to the point where it was actually going out.”

“We applied water to put out the flames without destroying anything that would be necessary in an investigation,” he said.

Perkins said officials from the Federal Aviation Administration were on the scene and is the lead investigatory agency. Officials from the National Transportation Safety Board were en route, he said.

“Now it’s a matter of waiting for the NTSB to come and for a salvage company to remove the plane,” Flatley said.

There will be a preliminary report in about seven to 10 days, but "there will be no analysis or determination of probable cause, just information we learned early in this phase of the investigation," he said.

Evelyn Martinez, daughter of Ed Harbes, who owns Harbes Family Farm, said in a statement the plane "crashed in our field after flying low over our property."

"This is a sad tragedy," Martinez said, "and our thoughts and prayers go out to the family of the passengers of the aircraft."

The Beechcraft A36 is a six-seat, single-engine plane.