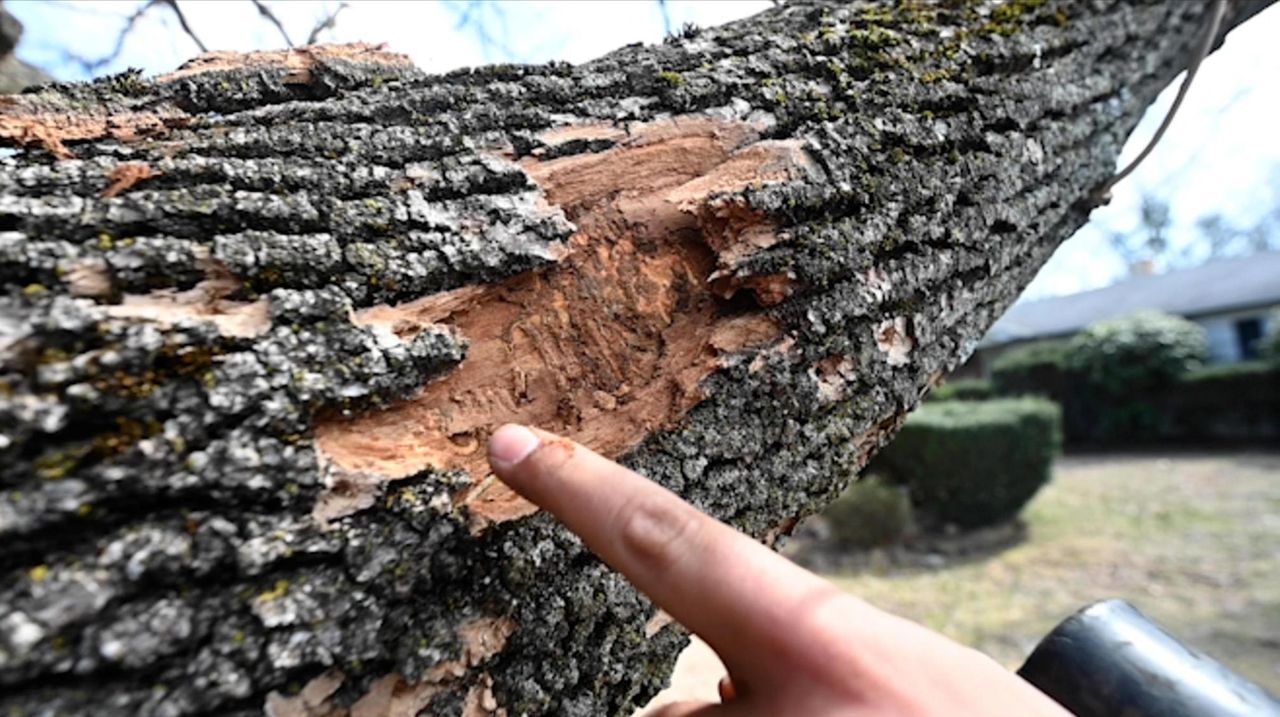 In an effort to save the town's ash trees, Smithtown officials are seeking a grant to track those infested with the emerald ash borer and, hopefully, stop the spread of the pest. The insects' larvae feed beneath the bark, causing damage to tissues responsible for transporting water and nutrients through the tree, often leading to its demise. Credit: Newsday / Alejandra Villa Loarca

Smithtown environmental officials are seeking grant funding from an invasive-species partnership to survey the town’s ash trees for the emerald ash borer beetle, found in three trees outside of a St. James man’s house last May.

Town foresters later found signs of the beetle’s larvae in trees in Kings Park, Nesconset and Commack. They removed 15 trees, including an eight-tree cluster on Nicola Lane in Nesconset, and are monitoring 25. But because the adult beetles have a flight range of about a mile, all the estimated 200 ashes on town property and rights-of-way may be susceptible, as well as an unknown number on private property.

David Barnes, the town’s Department of Environment and Waterways director, said he hoped to use an $8,000 grant from Long Island Invasive Species Management Area to hire two college interns to continue a census of the town’s estimated 50,000 streetside trees his department started last year. The management area partnership will announce the winning grant proposals early next month.

Staffers including Tom Colella, one of the town’s urban foresters, will examine the ash trees the interns identify for traces of the beetle. They also will do a limited assessment for residents who have ash trees on private property.

Infested trees face a gruesome death within a few years: the larva "chews through the tree’s water and nutrient-conducting tissues, strangling the tree," according to a website maintained by USDA Forest Service and Michigan State University. Symptoms include thin canopy and sprouting from the trunk after the upper portions of the tree die, as well as blonding, spots of light underbark exposed by woodpeckers searching for insects.

While the town may try to treat some of the less severe infestations by injecting pesticide into the trunk or sprinkling it over the root system, "the end game is to remove the tree," Barnes said. "Once you cut down the tree the sap stops flowing and the larvae die." Town workers then plant a replacement tree, usually within a year.

Barnes and Colella had never seen one in the flesh, though, until one afternoon this week when they visited two ashes on Pheasant Court in Commack. They were leafless but substantial with widely spreading branches, likely planted when the subdivision was laid out in the ’60s or ’70s, Barnes said.

Colella chiseled a small patch of bark on the larger tree to expose the scarring underneath. "See this S shape here? That’s the larvae moving through the tree, chewing their way through," he said.

A larva was borrowed at the end of the S. It was translucent and cream-colored, an inch long with a round head, segmented body and tiny pincers in the rear.

Colella picked it out with his fingers, photographed it and crushed it.