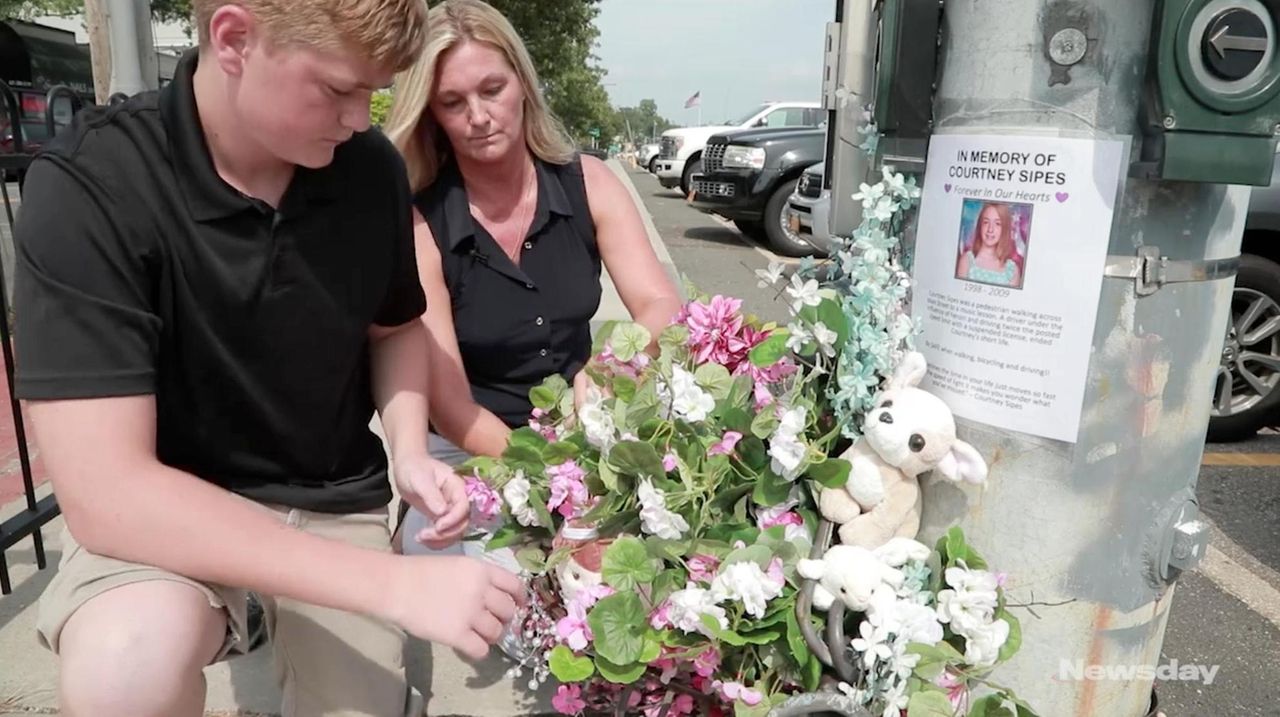 A temporary memorial honors the people hit by vehicles on Main Street in Smithtown. Relatives hope a permanent memorial can be approved in the near future. Credit: Newsday / Yeong-Ung Yang, Photo credit: Thomas A. Ferrara

The mother of a girl killed walking on Smithtown’s Main Street by a driver in an SUV a decade ago is pushing for a permanent memorial for her daughter and two other people killed in accidents while walking on the same stretch of New York State road.

It would be “a reminder of the lives lost there and the importance of being safe pedestrians and safe drivers,” said Lavena Sipes, whose 11-year-old daughter, Courtney, was struck Nov. 24, 2009, while walking across Main Street near Lawrence Avenue. “It doesn’t have to be a $50,000 sculpture or a fountain — just something nice that honors everyone.”

Michelle Stein, Doonan’s daughter, said she supported a memorial, though she tries to avoid the area where it would be placed. “I can’t drive down Main Street without thinking of that horrible night” when her father was struck, she said.

Local officials said after the deaths that the combination of a narrow road, fast-moving car and truck traffic and a large number of pedestrians made crossing Main Street perilous. Thousands of Smithtown residents signed a petition that Sipes circulated calling for safety improvements, and family members of the victims worked with town, county and state officials.

Some of those changes have slowed traffic in the area, and Smithtown Supervisor Edward Wehrheim said drivers sometimes complain to his office. “We don’t entertain those,” he said. “That was the purpose of it.”

Wehrheim said he supported Sipes’ request for a memorial and said it could be placed at the southwest corner of the Lawrence Avenue intersection. That corner is privately owned, but town officials have contacted the owner and are optimistic because he gave permission several years ago for installation of benches and a planter donated by the Rotary Club, Wehrheim said.

He envisioned a boulder and plaque similar to what town workers have installed in nearby parks. The town would pay for installation and for the boulder, but the families will have to supply their own plaque or pay for it themselves, with an estimated cost of $700 to $1,200, town spokeswoman Nicole Garguilo said.

A simple memorial to Courtney with flowers, a doll and a laminated flyer telling the circumstances of her death has sat for most of a decade at the intersection's southeast corner. For years, the Sipes family maintained it themselves; Lavena Sipes now lives in Arkansas, and a friend, Sonya Lorrain, maintains it in her absence.

Sometimes visitors stop to pray or drop off a stuffed animal, Lorrain said; sometimes they mistake her for Sipes. Courtney’s death is “still fresh in people’s memories,” she said.

Sipes said she still wakes mornings thinking about Courtney. She also lost her husband, Frederick Tracy Sipes, in 2017. "You keep trudging on," she said. "It's worth reminding everybody that we did some good here.”