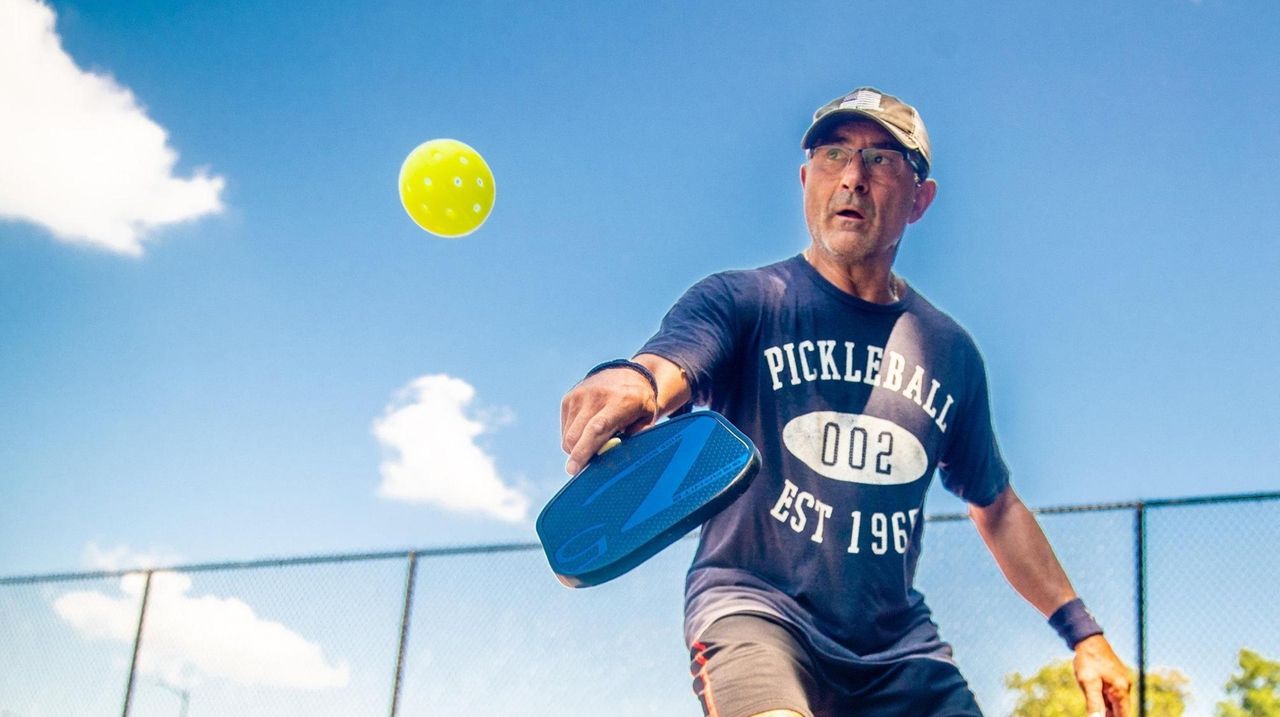 As part of Smithtown's $420,000 town park upgrades, eight courts will be dedicated to pickleball. John Merrill of South Setauket who played at Toner Park last week said, "it's great for camaraderie, it's great for exercise." Credit: Newsday / Raychel Brightman

Smithtown will spend $420,000 to upgrade four town parks this fall, laying new playing surfaces for basketball, baseball and tennis — and making a foray into the sport of pickleball, with eight dedicated courts.

"Outdoor leisure is vital for both the mental and physical well-being of every resident, young and old," Town Supervisor Edward Wehrheim said in a statement last week.

Improvements are planned for Burr Winkle Park and Whitman Hollow Park in Commack, Veterans Memorial Park in St. James and Charles P. Toner Park in Nesconset. Work will start in the second half of September and finish by late October.

The work is in addition to a previously scheduled $815,000 renovation for East Hills Park in St. James and Laurel Drive Park in Smithtown.

Toner and Burr Winkle parks have two lightly used hard-court tennis courts each. One court at each park will be converted into four courts for pickleball, a paddle sport that combines elements of tennis and badminton and uses a ball similar to a Wiffle ball.

Jones Wong, a Glen Cove resident and official ambassador for USA Pickleball who teaches the sport in Hempstead Town, said there are about 3.5 million players and 200 courts on Long Island. Smithtown's investment will "be among the first where they have that many courts" on the Island, he said.

"We try to meet the needs of the constituents," said Joseph Arico, Smithtown park maintenance director, who said the pickleball investment came after his office fielded calls and emails from the sport’s enthusiasts. "We tried in the past to reline the tennis courts" to allow for dual use, but "people who play became confused" by the profusion of boundary lines on the courts, he said.

"We are excited and happy" about the planned work, said Cathy Sciacca, 69, a retired Computer Associates meeting planner from Smithtown who organized an email campaign for court improvements.

At Toner Park one morning last week, where about 35 pickleball regulars have played for two years, three courts were set up for doubles, with lines drawn in chalk and folding chairs against the fence for those in between games. The local custom is to play a let on a serve that bounces on one of the grassy cracks in the asphalt. Pucks sometimes careen over the fence from the nearby roller hockey court, though Arico said the town would erect netting behind the hockey goal as part of its improvements.

Most of the regulars hail from Smithtown and Brookhaven. Some played at pickleball hot spots in Islip or Centereach before Toner.

They include Phil DeGaetano, 66, a retired teacher from Blue Point who swears the game has made his reflexes better than during his college tennis days and Dan Regini, 64, of Port Jefferson Station, a retired law enforcement officer who took up the game after a lifetime of baseball and racquetball and now plays four times a week.

Jerry Byrne, 67, of Huntington, a retired teacher, transitioned from basketball.

Gary Weil, 71, a produce salesman from St. James, said, "I realize kids have to have playgrounds, but seniors do too."