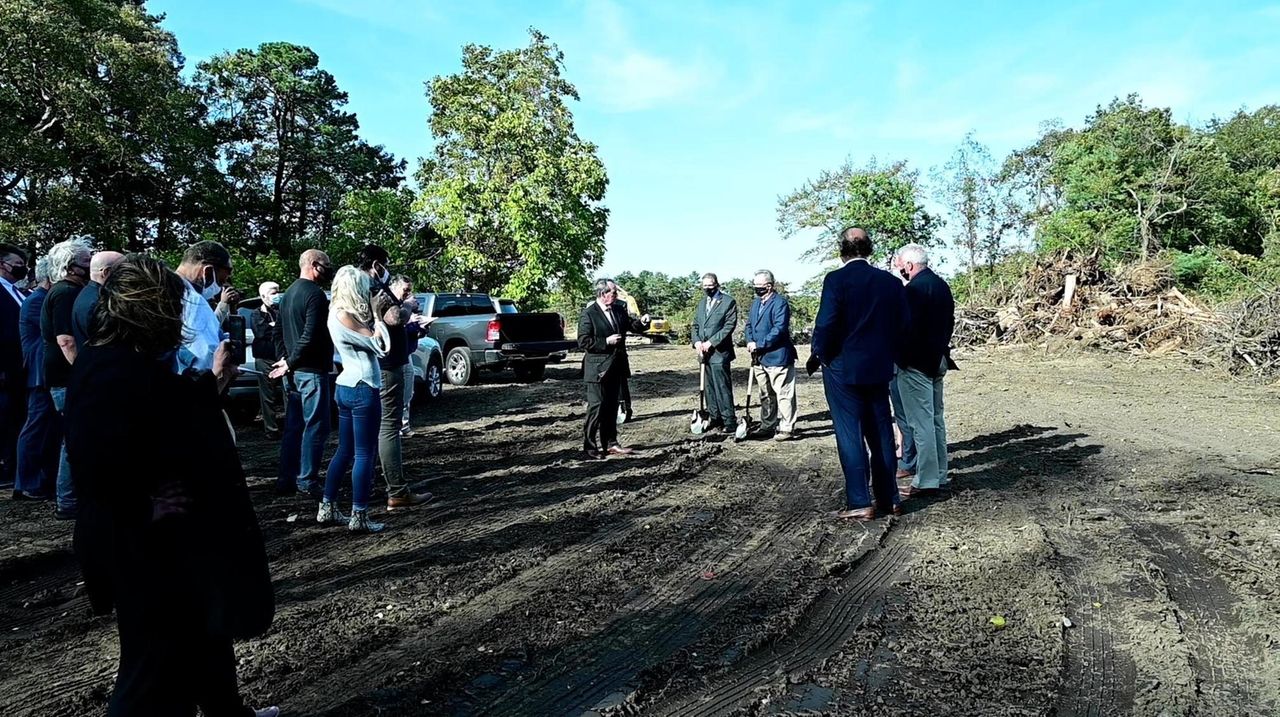 Smithtown officials on Thursday joined developers at a groundbreaking ceremony for the 55-and-older apartment project off Smithtown Boulevard in Nesconset, as members of a civic group that opposes the project protested quietly nearby. Credit: Newsday / Thomas A. Ferrara

Smithtown officials joined developers Thursday at a groundbreaking ceremony for a 55-and-older apartment project off Smithtown Boulevard in Nesconset as a civic group opposing the project protested quietly nearby.

The group, We Are Smithtown, has called for a moratorium on development in the town until adoption of a master plan and said the $47 million project, called the Preserve at Smithtown, will add traffic congestion in the hamlet. They have also criticized a $7.5 million tax break the Suffolk County Industrial Development Agency approved in 2019.

"Everything we’re doing here is to enhance the community," he said. "If we don’t take these steps this community will not thrive."

Work is expected to take two years on the 180-unit one- and two-bedroom rental community, which is being built on 20 vacant acres off Smithtown Boulevard near Chestnut Street. An IDA consultant for the project put market rates at $1,900 for the one-bedroom apartments and $2,450 for the two-bedroom apartments; 27 units will be designated as affordable housing, priced about 27% cheaper.

Thursday’s ceremony was conducted on recently cleared ground. Vincent Puleo, the town clerk, said residents of the project would bring millions of dollars in disposable income to area shops and restaurants, money that would encourage development of a walkable downtown. The project developer agreed.

"This is good for the economy and good for Smithtown," said project developer Jim Tsunis. "These residents will shop locally."

The Rev. Demetrios Calogredes, a Greek Orthodox priest, blessed many of those in attendance.

Town officials granted site plant approval in 1988 for 194 units to another developer and issued building permits that are still active. We Are Smithtown members have said the application should have a full environmental impact study. No new study has been done, but Werheim said in an interview that the entire proposal was reviewed by the town’s land use and Environment and Waterways Department.

Town spokeswoman Nicole Garguilo said in an interview Friday that a recent analysis of the application by town environmental officials found the new proposed development would have less impact than the old one because it would result in fewer units, less traffic and less wastewater, which would be processed at an on-site treatment facility. Residential development along what is now a commercial corridor will also open the way for federal and state sewer funding, she said.

James Bouklas, president of We Are Smithtown, said Thursday that the project, like the proposed Gyrodyne mixed-use complex and rezoning of the Long Island Innovation Park at Hauppauge, would turn the town into "something unrecognizable to its residents."

PSEG replaces steel pole damaged after crash on East End
Four Long Island districts back at polls today for budget votes
Nurse-practitioner comes back to LI to pay it forward
Nassau DA: Woman posed as immigration attorney
Lottery payouts to winners delayed by glitch
2:11
State at 70% COVID vaccination level for adults; Hempstead and Greenvale lag
Didn’t find what you were looking for?