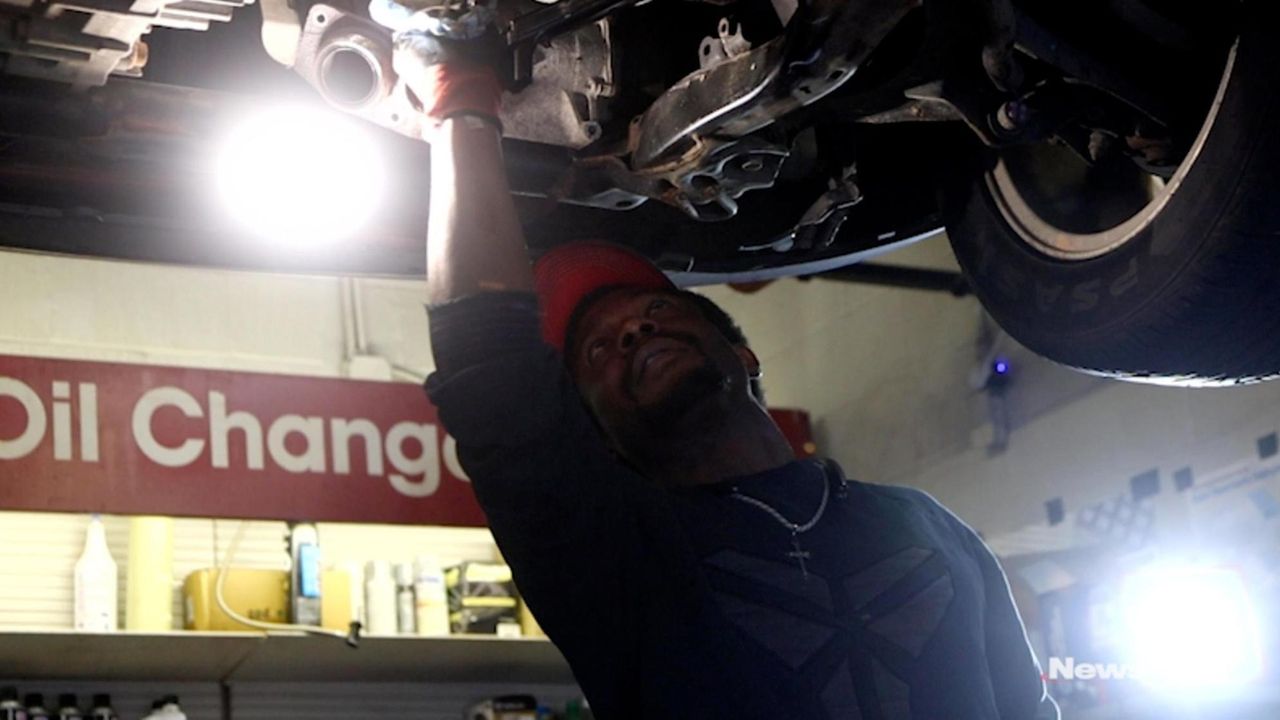 The expansion of Bolla Market in Smithtown will leave an auto repair shop without a place to do business. Mechanic Olusegun Sogbesan, who started his business in 2017, is worried about the unknown but optimistic that things will work out. Newsday's Cecilia Dowd has the story.    Credit: Howard Schnapp

Bolla Market plans to bring a popular Canadian coffee shop to a Smithtown gas station, ousting the mechanics who have made a living there for four years.

Garden City-based Bolla has applied for a special exception and variances to expand its convenience store at an 819 W. Jericho Tpke. Mobil station to include a Tim Hortons, Suffolk County’s first, adding a drive-thru but eliminating two repair bays rented by Olusegun "Victor" Sogbesan and a partner, Omar Hernandez.

"We’re not trying to trespass" or stop construction, Sogbesan said at an Oct. 29 Zoning Board of Appeals hearing. But he said he attended the hearing to get information; Bolla officials "don’t tell us anything."

David Altman, a Melville lawyer who appeared for Bolla at the hearing, said "we’re not insensitive to the gentleman’s concern … We’ll see what we can do to help." Altman did not agree to an interview. Sogbesan said in an interview that he’d spoken with Altman after the hearing and emailed him at the lawyer’s request.

"We are small fry — if the bigger fish comes, we can be eaten," said Sogbesan, 30, of Deer Park, adding that he was impressed by the business savvy of Bolla owner Harvinder Singh. "I’ve been myself to his locations. He makes them beautiful."

A first-time business owner, Sogbesan said he paid $3,000 a month to rent garage space but hasn’t had a lease since 2019, when he said Bolla took over the location. During the pandemic shutdown last spring, he said, he didn’t pay rent in March but has since caught up. Sogbesan said Altman had told him he might be asked to leave by late summer but that he had no firm date. Security and advance rent on a new space would cost $10,000, he estimated, and could mean losing customers for a business he said was finally starting to "bloom."

Hernandez, 27, of Brentwood, said in an interview that business had been "really slow" when the two opened but had improved as they developed a following from residents of the neighborhoods north of Jericho Turnpike. "He built it," Hernandez said. He said he feared for his partner, who is the sole provider for a family with two toddlers and another baby on the way. "That’s how he feeds his family."

In a text message this week, Sogbesan said he was looking into buying a repair business in Deer Park. Altman hadn’t responded to his email, he said.

Bolla Oil Corp., founded by Singh in 1988, owns and operates 150 stores branded Bolla Market and distributes wholesale fuel to 50 other locations. It operates six sites in Smithtown. The company’s chief operating officer told Newsday in July that it planned to add up to 20 Tim Hortons in the next year and a half, perhaps expanding the brand throughout the Bolla Market chain.

Town spokeswoman Nicole Garguilo said that Bolla representatives had not spoken with the supervisor’s office about the application and that the supervisor had not spoken about the application with planning officials. Wehrheim’s fundraising does not influence his governing, she said. "He has always separated the two and will always separate the two." In an additional emailed statement, she said that planning approvals are made by the autonomous boards of zoning appeals and the planning. "Any decision made by the town board after the fact is merely for site plan review and is decided solely based on the recommendations of the Planning Department," she said.

ZBA chairman Ed Benz did not respond to a request for comment.

Bolla chief legal officer Michael Lewis, responding to questions emailed to Altman, said in an email that "Bolla is excited about this project, which will upgrade the existing gas station facility and convert the repair bays into a Bolla Market convenience store."

Smithtown Town planner Peter Hans said conversions like the one Bolla is proposing are common. "We’re seeing this type of thing constantly, where a lot of filling stations are getting out of repairs," he said. "More and more vehicles are being serviced at dealerships."