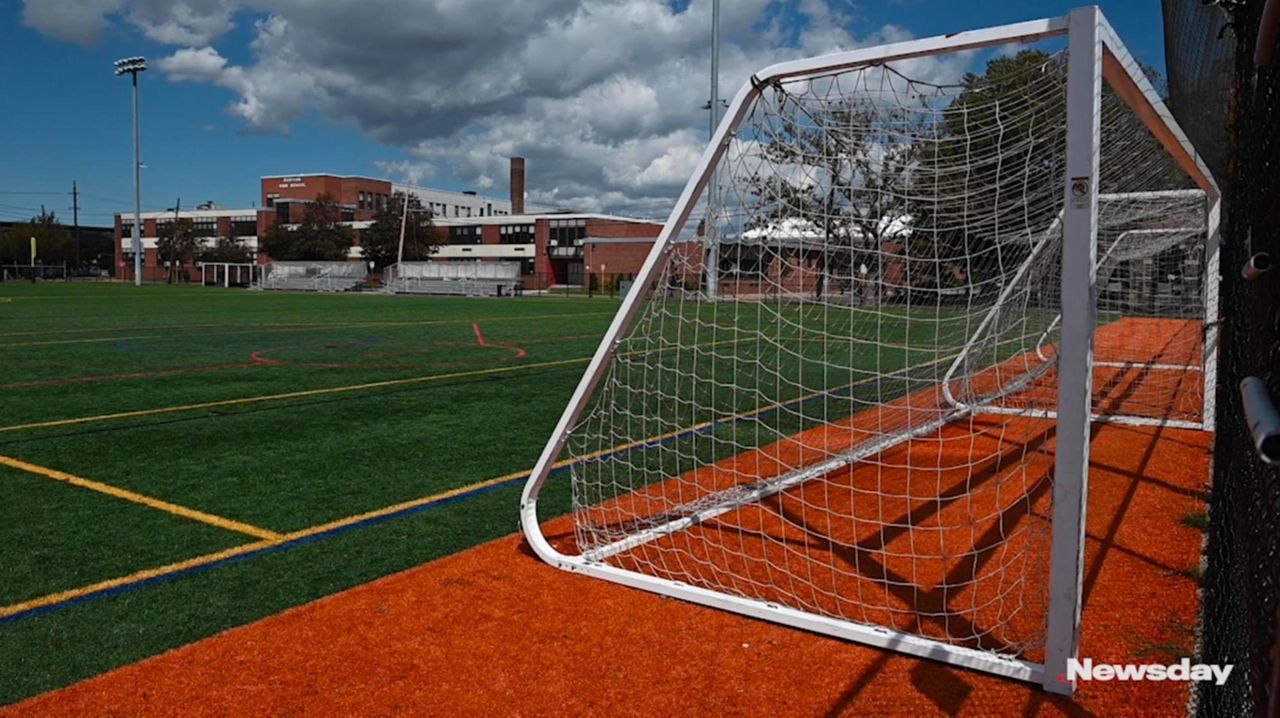 Parents of a Babylon Village-based junior soccer club are outraged that the club was forced to find another field to practice on, after the Babylon Union Free School District said it would not consider a permit to use school fields amid COVID-19. Newsday's Chelsea Irizarry has the story. Credit: Newsday / Steve Pfost; Chelsea Irizarry

A Babylon Village-based junior soccer club is looking for places to play and may have to pay to practice on private fields after the Babylon Union Free School District said it would not consider a permit to use school fields.

The Babylon Soccer Club, a 501© nonprofit, filed for a permit Aug. 6 to use the elementary and high school fields, where it previously played, and was told the same day that the request would not be processed, said club president John Farrell. He called the denial a “knee jerk” reaction and said the school district based its judgment on a July ruling from the New York State Public High School Athletic Association, which has delayed the start of the 2020-21 sports season to Sept. 21.

“We’re being treated like the schools but we’re not subject to the same rules as the schools,” said Farrell, adding that more than 90% of the club’s 400 members on its intramural and travel teams live in the village. “We’re in a tough spot because we don’t have a place to play.”

Soccer is among the sports that carries a moderate risk for players to play, according to the state’s reopening plan from the coronavirus pandemic.

Superintendent of Schools Linda J. Rozzi said in a statement Aug. 13 that the district has kept all the facilities closed since Gov. Andrew M. Cuomo’s first executive order in March.

“We are focused on the safe reopening of our schools and its grounds for instruction, which will remain our top priority moving forward,” she said.

The soccer club’s board of directors wrote on its website that the school district told them “their concern that the School would be sued if they allowed us to use the fields and there was [a] coronavirus outbreak.”

Farrell said the district’s decision puts the club in a bind, as field use is limited in the Village and the Town of Babylon. The club must submit its home schedule to the junior soccer league by Aug. 31. If it doesn’t, Farrell said the club will have to work with the town and the Long Island Junior Soccer League to play all its home games outside the village.

“It’s hard enough to get to a field that’s close to your house,” said Farrell, who has a son and daughter, ages 7 and 10, respectively, who both play in the club. “It’s another when parents have to go 10 to 14 miles.”

Tim McDonough, a village resident, said his son plays on the travel team. He wrote an email to Rozzi to express his “outrage.”

“We pay for the fields,” he said. “On the governor’s orders it’s safe to play. These kids need this more than ever. They just want to be around their friends and play soccer.”

Babylon is not the only club facing obstacles.

Steve Padaetz, managing director of the junior soccer league, which has more than 100 clubs on Long Island, said there are inconsistencies because some clubs were denied permits while others have been allowed to utilize school fields to play and practice.

“Some of the clubs [rely] solely on school districts,” Padaetz said. “If the school districts are reluctant or will not issue permits it’s obviously going to preclude their ability to run programs.”