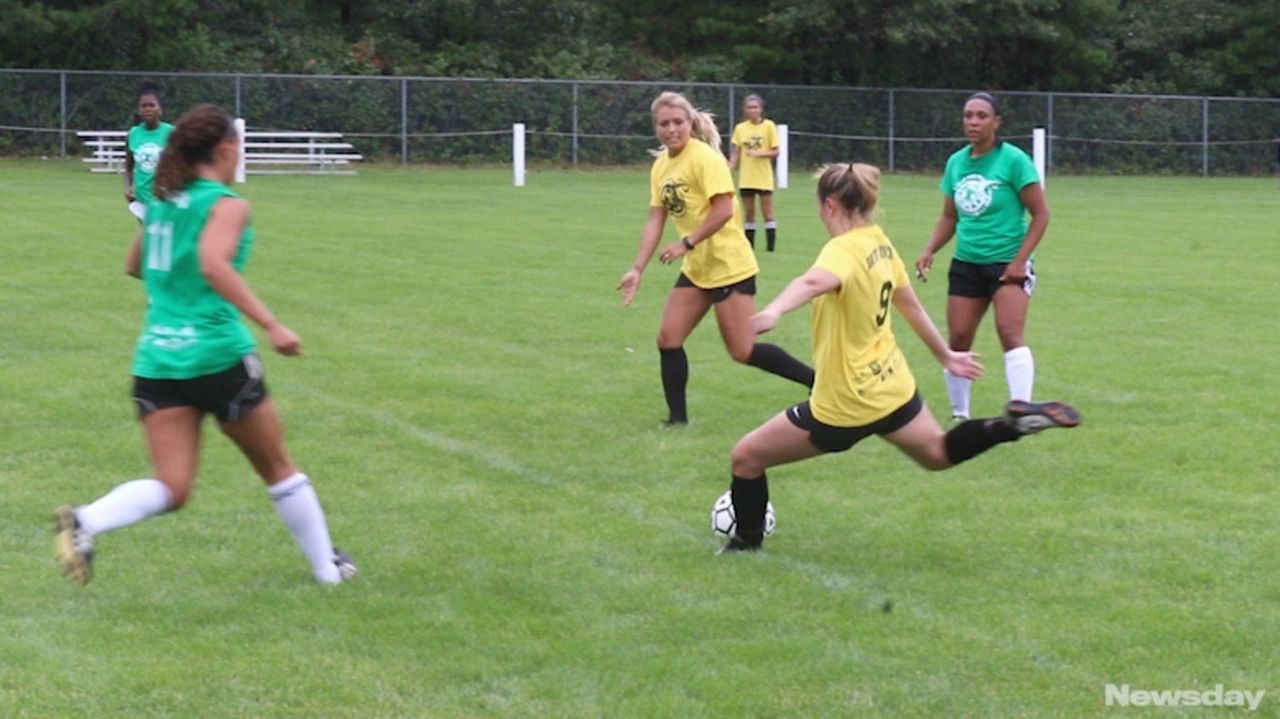 On Saturday, August 12, 2017, the "Play for Peace" soccer tournament was held in Medford to honor the slain Ecuadorean immigrant Marcelo Lucero, who was stabbed fatally in Patchogue in November 2008. The event was held with the intention of fostering tolerance and celebrating diversity - sentiments close to the heart of Joselo Lucero, Marcelo's brother, who spoke at the event.  Credit: Ed Betz

Donna Ruiz has watched her daughter compete in countless soccer games in the past two decades. And while many may now blend together in her memory, the tournament Saturday in Medford where she cheered on Melissa Ruiz, 25, stood out.

“Because of what it represents,” said, Ruiz, 57, of Centereach.

Melissa was one of hundreds to participate in the ninth annual “Play for Peace” soccer tournament, an event organized to foster tolerance, celebrate diversity and honor the memory of Marcelo Lucero, an Ecuadorean immigrant stabbed fatally in Patchogue in November 2008.

Lucero was attacked near the Patchogue train station late at night by a group of teenagers who later told police they had been looking for a Hispanic person to beat up.

“It really was a tragedy that hit the whole Patchogue-Medford community,” said Suffolk Legis. Rob Calarco (D-Patchogue) during a brief ceremony before the games began.

The episode uncovered long-simmering racial tensions in Suffolk County, where growing immigrant communities have found at times reluctant welcomes from their new neighbors.

Established in the wake of Lucero’s killing, the tournament offers a chance to “build bonds and get to know one another,” said Calarco, who helped organize the event, as flags from countries around the world billowed next to him.

“And we do that through play, through soccer.”

Seven men’s and seven women’s teams from throughout Long Island competed in the round-robin tournament, which raised money for the Medford Volunteer Ambulance company and Patchogue Head Start, an early childhood education program.

The pre-match ceremony also included a moment of silence for Joshua Mileto, a Sachem High School East student who died in a training drill during a football practice Thursday.

Matt Montanez, 22, of Deer Park, was competing in the tournament for the first time this year.

“It’s definitely a great cause,” Montanez said as he prepared for his first match. Soccer can be “a unifying experience,” he said.

Some of the younger players said they did not remember Lucero’s killing. That makes the mission of Saturday’s event all the more crucial, said Joselo Lucero, Marcelo’s brother.

“It’s important for people to know” what happened, said Lucero, 42, of Bay Shore, speaking in English and Spanish before the event.

Lucero said in an interview later that efforts to promote tolerance between different ethnic groups have grown more urgent because of what he sees as an uptick in anti-immigrant sentiment since the election of Donald Trump.

He appealed to the players gathered before the match to always strive to recognize what they have in common with others.

“Embrace people with different ideas,” he said. “Have respect for each and everyone.”

Pressure mounting for Gov. Cuomo to resign as Jacobs, allies abandon him
Number of COVID-19 patients in LI hospitals on rise
Long Beach Road flooding 'a problem for 30 to 60 years'
Faculty union at Stony Brook U. appeals for universal mask mandates
Canceled by COVID again: New York Auto Show
Cuomo facing probes into COVID-19 in nursing homes, book deal
Didn’t find what you were looking for?