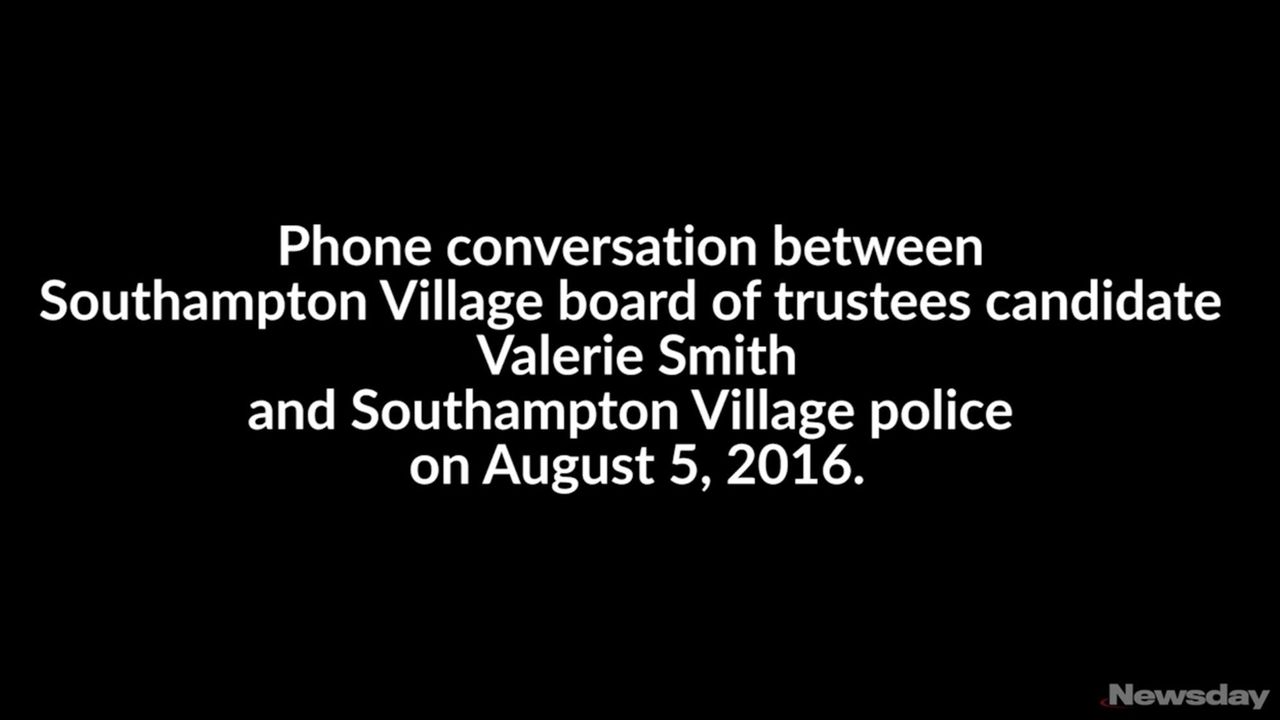 Southampton Village board of trustees candidate Valerie Smith has been criticized by officials across Suffolk County after she used a racial epithet in a call to police on Aug. 5, 2016. This recording has been edited to remove offensive language and personal information. Credit: Southampton Village police

Officials across Suffolk County are calling for Southampton Village board of trustees candidate Valerie Smith to apologize after she used a racial epithet in a call to police.

“Words do hurt and it is important that every person, particularly those in positions of leadership in our communities or hoping to enter leadership positions, be most mindful of what they say and do,” said a joint statement issued Tuesday, which was also signed by the Suffolk County Human Rights Commission, the Suffolk County Anti-Bias Task Force and the Southampton Town Anti-Bias Task Force.

Some officials said they planned to focus on defeating her in the June 16 village election.

In a recently released call to police on Aug. 5, 2016, Smith asked for officers to remove a group of people she described with a racial epithet who were “standing in front of my house drinking Hennessy and everything else,” according to an audio recording first obtained by the Southampton Press. When police asked Smith where on Windward Way she was, she replied, “the black neighborhood.”

Officer Kyle McGuinness arrived about five minutes later but did not find “the described subjects,” according to a police report obtained by Newsday. Smith told the officer that people drinking in the road is a recurring issue, the report said.

Smith, who is white and lives in the Hillcrest neighborhood, defended her use of the racial epithet and repeated the word multiple times in an interview with the Press, the paper reported.

“I came into this neighborhood colorblind,” Smith, 53, told the Press. “When you are a pioneer, like I am, it’s not easy. I’m the only white person who owns and lives on this street.”

Smith, who is challenging incumbents Nancy McGann and William Hattrick Jr. for two trustee seats in the election, declined Newsday’s requests for an interview Wednesday.

Before leaving a Thursday community meeting, she told a reporter “this is a much bigger story that has not been told” without elaborating.

Smith has called village police more than 100 times in the six years she has lived in the neighborhood, Epley said. The calls, which were made to the department’s administrative line, have mostly been about loitering, garbage and homelessness.

Some residents and officials said that Smith, who has never held public office, would have a difficult time representing constituents because her attitudes are not reflective of the Southampton community.

“It makes me feel like somebody like that shouldn’t run for office because you have no perception of how people feel, what is out there,” said Hillcrest resident JoAnn Conquest, 74.

At a heated Hillcrest community meeting Thursday, Smith refused to apologize for her comments. About 50 neighbors had gathered to discuss fighting her campaign. As they called on her to acknowledge why the slur was hurtful, she defended using it, claiming she was upset by a neighbor littering and wanted him to apologize first.

Smith also said “it doesn’t make sense” that African-Americans can use the slur but she can’t.

Linda Gee, who lives next to Smith, said her explanation didn’t make much sense.

James Banks, chairman of the Southampton Town Anti-Bias Task Force, said he plans to organize an initiative to get more voters to the polls.

“It is essential that the residents of Southampton Town who oppose discrimination and racism get out and vote to ensure that anyone who represents that kind of rhetoric or speaks that way about people of color never get into office in our town,” Banks said.

Lucius Ware, president of the Eastern Long Island Chapter of the NAACP and a Southampton Town resident, said he expects “massive” attendance at a candidate debate, which will be held at the Southampton Arts Center at 6 p.m. Monday.

“It doesn’t matter to me whether she drops out or not,” Ware said. “If I wanted to hope something, I would hope she stays in and gets soundly defeated.”