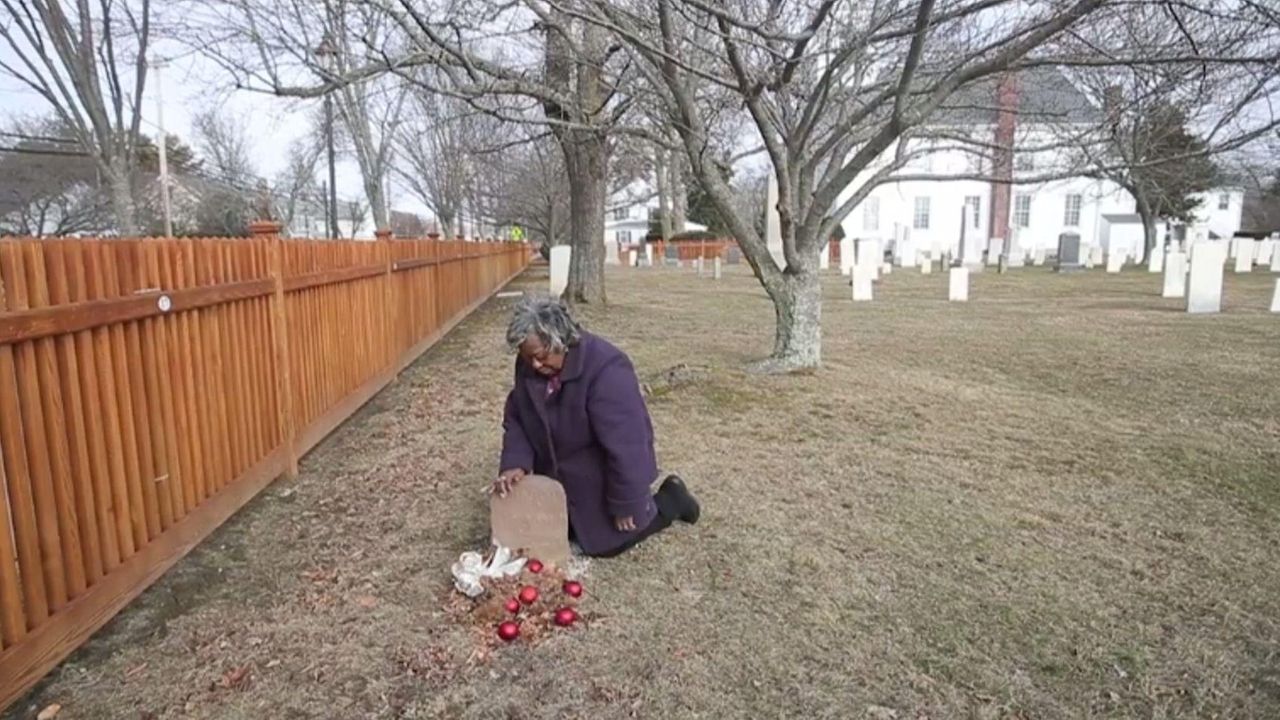 Eleanor Lingo grew up in Southold, and when she was a teenager discovered a grave in the Old Burying Ground marked "Negro Slave Lady."  For many years in December, she has placed wreaths on graves of her family and the mystery woman. It took Lingo, now 90, decades to learn who the mystery woman was. She tells the story on Feb. 23, 2017.. Credit: Randee Daddona

Every December, Eleanor Lingo makes five wreaths to leave at the Old Burying Ground in Southold. Two to lay on her parents’ graves, two for other relatives, and one for a woman she knew only as the “negro slave lady.”

Lingo, now 90, first noticed the grave as a teenager and one of very few African-Americans living in Southold, she said. Every day on her way to school she’d walk past the Old Burying Ground on Main Road and inspect the gravestones. One in particular stuck out to her. As a teen she remembered the stone was marked: “Negro slave lady.”

“There weren’t many people of color in the town when I was growing up, so when I saw that, I was curious. I felt a connection with her,” Lingo said.

Lingo moved to Bridgeport and later Brooklyn after graduating from high school, but she never forgot about that grave, she said. So when her mother died in 1954, Lingo decided to pay a visit to the “slave lady.” But when she tried finding the grave, which rested under a tree beside a picket fence, she could only find a stone that read “Bloom.”

She left the wreath there instead. And she continued to do so every Christmas.

It wasn’t until 1979 when Lingo, who had since moved back to Southold, came across an article in the Peconic Bay Shopper titled “Bloom, a Negro Girl,” that she connected the dots.

According to the article, “a young colored girl” was abandoned on the shore by British marauders and taken in by the Mulford family. She was deaf and muteand the only thing she could say was “bloom.”

She is one of at least three slaves buried at the Old Burying Ground, according to information provided by the cemetery.

“I was shocked and of course very happy when I found out who it was,” Lingo said. “She was just this little special child that had been thrown off this ship.”

Years later, residents began to wonder who had been leaving the wreaths on Bloom’s grave. A 1982 article in the Weekender reads:

“Every Christmas a wreath is laid on her grave. This year it was an evergreen spray with Christmas balls and a wide red velvet bow. Who leaves this token of love?”

Lingo quietly remembered Bloom for years before her story was reported by local outlets and later by Newsday in December 1992. Soon afterward, Lingo said she received calls from around the country from people who commended her for keeping the slave’s memory alive.

“This is something that she didn’t have to do. And if she hadn’t done it, no one would ever know that that young lady was ever there,” said Lingo’s niece, Lizette Malone. “I’m very proud of her.”

Bloom’s grave is now a regular stop on cemetery tours. Melissa Andruski, a tour guide, said she leads guests past the small sandstone marker and talks about Bloom’s story and Lingo’s long-standing tradition.

“I think they’re generally just surprised when I tell the story, and I think people go away feeling like they’ve made a human connection with Bloom and others buried there,” Andruski said.

Each year Lingo still makes wreaths from pine her husband cuts from the bottom of their Christmas tree. Sometimes she decorates them with ribbon and sometimes with Christmas ornaments.

Lingo will turn 91 this year and will keep decorating Bloom’s grave “for as long as (she) can,” she said. Malone, 56, of Helmetta, New Jersey, said she and her three daughters will continue the tradition when her aunt no longer can.

“I really didn’t want her to ever be forgotten,” Lingo said. “She’s become like a member of the family.”

Cuomo lifting pandemic restrictions: New York going back 'to life as we know it' after reaching vaccine threshold
PSEG replaces steel pole damaged after crash on East End
Four Long Island districts back at polls today for budget votes
Nurse-practitioner comes back to LI to pay it forward
Nassau DA: Woman posed as immigration attorney
Lottery payouts to winners delayed by glitch
Didn’t find what you were looking for?