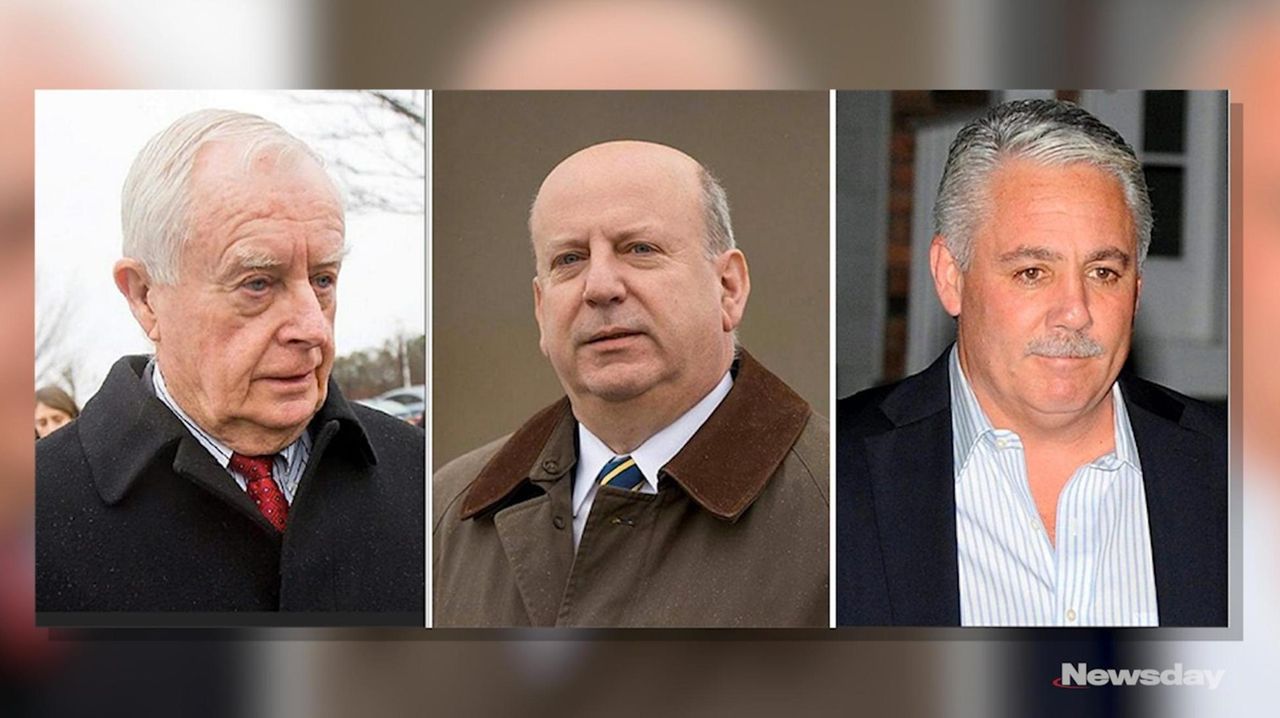 Suffolk County is suing former District Attorney Thomas Spota and his top aide Christopher McPartland, who were convicted in December of impeding a federal probe, to recover salary, bonuses and benefits they received while covering up the beating of a handcuffed prisoner by former Police Chief James Burke.

The lawsuit filed in Suffolk County Supreme Court on Friday also seeks salary and other compensation Burke received during the years he tried to cover up the assault of the prisoner, Christopher Loeb.

The county did not specify in the legal action how much it wants Spota and McPartland to return. However, the lawsuit seeks the return of $630,000 in unused vacation and sick time payout Burke got before resigning in October 2015. About six weeks later, a federal grand jury returned an indictment charging Burke with violating the prisoner's civil rights and conspiracy to obstruct justice. Burke pleaded guilty in February 2016.

The 21-page lawsuit filed late last week accuses the three of violating New York State’s faithless service doctrine, which allows employers to recover compensation from employees who are disloyal or engage in misconduct.

The three men engaged in fraud, breach of fiduciary duty and unjust enrichment, according to the lawsuit.

“Plaintiff demands that Defendants forfeit all compensation, including wages, bonuses, and benefits they received after and during the period they committed and were committing their faithless and disloyal acts,” the lawsuit said. “This includes their salaries earned during the period of faithlessness and disloyalty, the value of any benefits, and the value of any vacation or sick time which resulted in payouts that accrued during that time.”

Bellone asked the county attorney’s office last year to sue Spota and McPartland as well, but county officials decided to wait until after their trial, officials said.

“These three convicted felons subverted the laws they were sworn to enforce," Bellone said in a statement. "Their corruption not only had a devastating impact on the lives that they targeted and ruined, but it also crippled the operations of government and had a profound financial cost to the county. We seek to recover every penny that they pocketed from Suffolk County taxpayers during the period in which they ran their criminal enterprise."

Larry Krantz, McPartland's attorney, said, "I have not seen the filing. I have no comment at this time." Joseph Conway, Burke's attorney, declined to comment. Alan Vinegrad, Spota's attorney, did not respond to requests for comment.

Spota was elected district attorney on an anti-corruption platform in 2001. McPartland was one of his top aides for years. Their loyalty to Burke, Spota’s longtime protégé and one of McPartland’s best friends, spurred them to cover up the former chief's beating of Loeb at the Fourth Precinct in Hauppauge, federal prosecutors argued during the obstruction and conspiracy trial last year.

The lawsuit, echoing the case that federal prosecutors made at their trial of Spota and McPartland, said the two pressured witnesses to refuse to cooperate with investigators, lie under oath and withhold relevant information from the FBI.

A jury in U.S. District Court in Central Islip convicted Spota and McPartland on Dec. 17 of orchestrating a cover-up of the beating of Loeb, 33, of Smithtown, at the Fourth Precinct in Hauppague by Burke.

Burke, 55, of St. James, pleaded guilty to violating Loeb’s civil rights and conspiracy to obstruct justice and was sentenced to 46 months in federal prison in November 2016. U.S. District Judge Joan Azrack, who presided over Spota and McPartland’s trial, is expected to sentence the defendants on April 30, according to court filings.

Spota, 78, of Mount Sinai, and McPartland, 54, of Northport, asked Azrack to throw out their convictions and grant them a new trial, according to court papers filed last month. The former prosecutors asked for an evidentiary hearing to review what they called was perjured testimony by a key prosecution witness, former Suffolk police Lt. James Hickey.

Suffolk County is not the first government agency on Long Island to use New York’s faithless servant doctrine in an effort to claw back salary and other compensation from employees who engage in misconduct. The William Floyd Union Free School District invoked the legal principle to sue former assistant superintendent for business Daniel Cifonelli, who pleaded guilty in 2006 to stealing more than $687,000 from the district, the state retirement system and various bank and insurance accounts. He was sentenced to two and a half yeas in jail, and was also prosecuted federally for tax evasion. He died in May 2013, court records show.

Former treasurer James Wright, who pleaded guilty to stealing more than $777,000 from the district, was also named as a defendant in the lawsuit. It sought to recover the money the men admitted stealing as well as any compensation they received from William Floyd schools during their breach of fiduciary duty. Supreme Court Justice Thomas Whelan in Suffolk County ruled that the former school administrators’ admissions of guilt warranted forfeiture of future insurance benefits for 10 years. An appellate court ruled in 2009 that the school district did not have to pay any further benefits because Cifonelli and Wright had “engaged in repeated acts of disloyalty.”