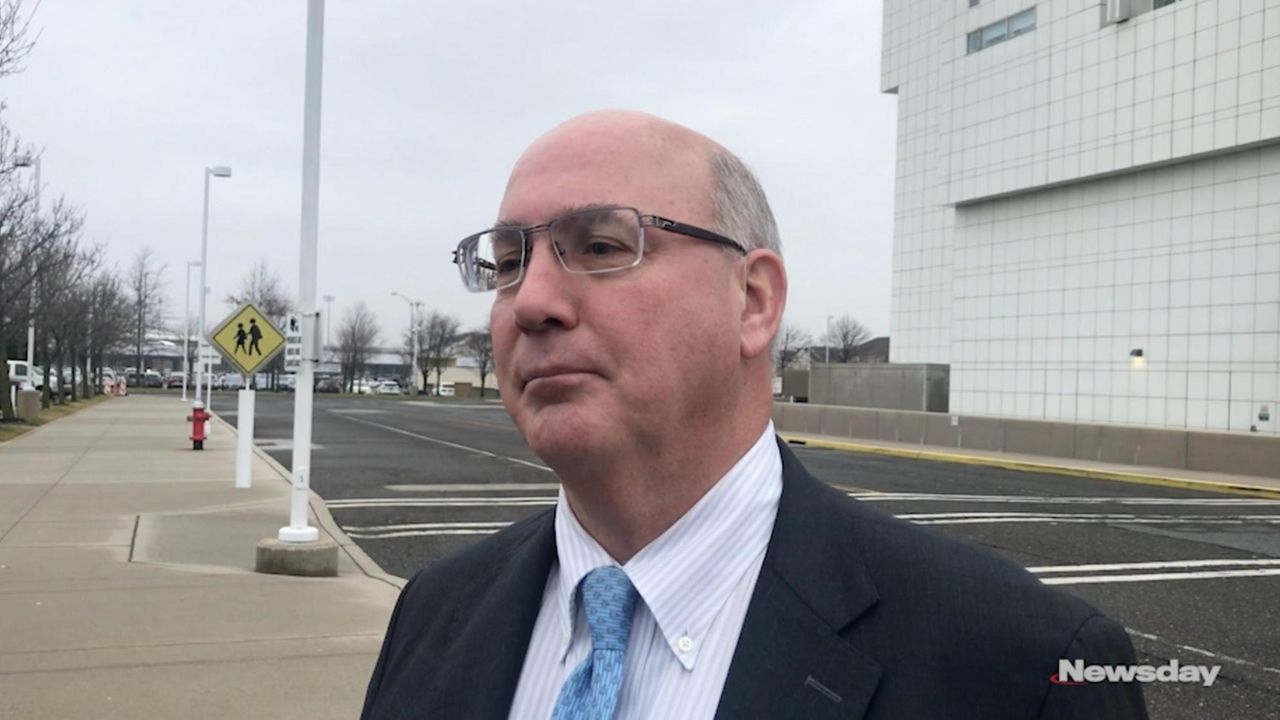 The lawyer for ex-Suffolk Police Chief James Burke testified Tuesday at the obstruction trial of Burke's mentor that Burke wanted it known, after pleading guilty in 2016 to assaulting a prisoner, that he hadn't cooperated with federal prosecutors.

Defense attorney Joseph Conway also said on the witness stand that Burke wanted that message specifically conveyed to Suffolk District Attorney Thomas Spota and one of his chief aides, Christopher McPartland. The two have since resigned and are now on trial in federal court for allegedly trying to help cover up the assault.

"Mr. Burke wanted it known he was a stand-up guy, he was not talking to anybody," Conway testified his client told him to tell the media after the February 2016 plea.

"He asked me to pass that sentiment on to Mr. Spota and Mr. McPartland," Conway added, before confirming that he did so at the time.

The defense attorney said Burke, Spota's former chief investigator and protege, meant by saying that he was "not talking to anybody" that he was not cooperating with the government.

Conway, who was under government subpoena, appeared at the Central Islip trial in the fifth week of testimony. Spota and McPartland later told U.S. District Court Judge Joan Azrack they wouldn't testify before their attorneys rested their cases without calling witnesses.

Prosecutors, who also rested their case Tuesday, say the two tried to help conceal Burke's 2012 assault of a prisoner in a police precinct. But the defendants contend that isn't the case and say Burke never admitted his guilt to them.

Burke, in his guilty plea, admitted to beating Christopher Loeb — a now-recovering heroin addict who stole a duffel bag from Burke's police vehicle — and trying to cover it up.

Inside the bag were items including Burke's gun belt, ammunition, sex toys, police union cards with his name on them, pornography and Viagra, according to trial testimony.

Conway, who previously served as Long Island criminal division chief for the U.S. attorney's office, said he didn't have "any recollection" of the reactions from Spota and McPartland when he passed on Burke's message.

Burke served most of a 46-month prison sentence before his release to home confinement last year.

Lawyers for the defense and prosecution are expected to make their closing arguments to the jury Wednesday.

Conway also said during questioning by prosecutor Nicole Boeckmann on Tuesday that he got inquiries from Spota and McPartland about Burke after his arrest, when he was an inmate at Metropolitan Detention Center in Brooklyn.

Conway said they would ask, "How is he doing? How is he holding up?"

The Mineola-based defense attorney said he learned in May 2015 that the federal investigation into the Loeb case — which was called off in 2013 — was back on.

He said attorney Ed Jenks called him after attending the unveiling of a judge's portrait and learning the probe was active and prosecutors were "zeroing in" on Jenks' client, former Suffolk detective Kenneth Bombace.

Bombace, who retired in 2015, previously testified under immunity that he took part in assaulting Loeb along with Burke and two other detectives.

Conway said he made as many calls as he could after that "to see if anyone else had been contacted" by federal officials.

The witness also recalled getting a call from Spota on June 4, 2015.

"He wanted to know why, how this investigation was back on," Conway testified.

Star prosecution witness James Hickey, a retired police lieutenant who pleaded guilty to taking part in the alleged cover-up attempt and is awaiting sentencing, previously testified to being present at a meeting in Spota's office on that same date.

Hickey said Spota grilled him on who had "flipped" after learning the federal civil rights probe into the Loeb case had restarted.

Hickey said Spota said to him: "Somebody's talking. You better find out fast, if it's not too late."

Hickey also testified that McPartland then told Spota: "Call Joe Conway. Conway has all the lawyers corralled and he will know if somebody's talking."

After leaving a voicemail for Conway, Hickey said Spota turned to him and asked: "Who do you think flipped?"

Phone records that an FBI agent testified about earlier in the trial showed a call to Conway of one minute or less at 12:54 p.m. from the executive offices of the Suffolk County district attorney's office.

Conway's phone was then used to call Spota's cellphone at 1:31 p.m. and there was a connection for a minute or less, according to the evidence.

Evidence also showed that at 1:45 p.m., the phone in the office of Spota's former chief deputy, Emily Constant, was used to call Conway's cellphone and connected for seven minutes.

Conway also said Tuesday that when he spoke to Spota on that day in June 2015, he told him federal officials might be looking into anyone who obstructed the first federal probe into Loeb's case.

The defense attorney recalled telling Spota that he also thought the reopened federal probe might have something to do with Spota's prosecution of John Oliva.

Oliva, who had been a Suffolk police detective, pleaded guilty to official misconduct after an investigation into whether he was leaking confidential information to the media.

Moustakas said Spota was especially interested in calls involving people that included a Newsday journalist who had written articles viewed as critical of Burke.

Later Tuesday, Conway told Spota’s attorney, Alan Vinegrad, that he further explained to Spota on the same June 2015 call that the federal probe into Loeb's treatment “might have heated up … based on the prosecution of John Oliva.”

Conway said he shared with Spota that he'd heard federal officials “were not happy” about the prosecution of Oliva, whom Burke took off a federal gang task force in 2012.

The defense attorney said he also told Spota the "feds were looking at the police unions” as part of their investigation.

Conway said during Vinegrad's questioning that he explained the "broad" federal obstruction statute to Spota.

The witness also agreed with Vinegrad that there was nothing improper about that conversation or others he had with Spota about the federal probe.

Conway further testified under cross-examination that he had asked Burke in mid-2015, after he knew the federal probe into the Loeb case was reopened, to create a timeline for him.

The defense attorney said Burke's timeline included a denial of beating Loeb and a “detailed explanation” about why federal officials were retaliating against him.

During more questioning by the prosecution, Conway said he spoke to McPartland while he was representing Burke, saying he had separate cases at the time that involved the Suffolk district attorney's office.

The witness said McPartland brought up the Burke case a number of times during the summer and fall of 2015, asking Conway what was happening and what evidence federal prosecutors had.

But Conway later told Larry Krantz, McPartland's attorney, that he didn’t believe McPartland asked anything improper when the two spoke of the federal probe amid discussions of other cases.

FBI Special Agent Michael Weniger testified later that phone records showed Burke called William Madigan, the chief of detectives, and then McPartland, and then Anthony Leto – a detective who testified he took part in Loeb’s beating – and then Hickey after getting a call from an FBI supervisor in December 2013.

Other testimony has indicated the FBI supervisor left a message telling Burke the initial investigation into the Loeb case was over.

Weniger also said the government subpoenaed the emails of the defendants and others.

He displayed a 2014 exchange that Spota had with the second-in-command at the Queens district attorney’s office. At the time, the office had  secured a top-count plea from Loeb after taking over his case in a special prosecutor’s role.

The email showed Spota passed on thanks for “helping us out on this difficult prosecution,” calling the Queens prosecutor on the case “smooth as silk” and the judge in the case “weak.”

Power on Trial: James Burke's lawyer takes the standJoseph Conway, attorney for the convicted ex-Suffolk police chief, testified in the Spota-McPartland trial. Spota's obstruction trial: How we got hereFollow Newsday's coverage from the beginning of the case against Thomas Spota. Spota through the yearsThomas Spota has been serving as Suffolk County's district attorney since he won his first ... See notable moments from Spota's careerThomas Spota was elected district attorney in 2001 as a corruption fighter. He retired in 2017 after being indicted on federal charges. Here's a look at Spota's career.