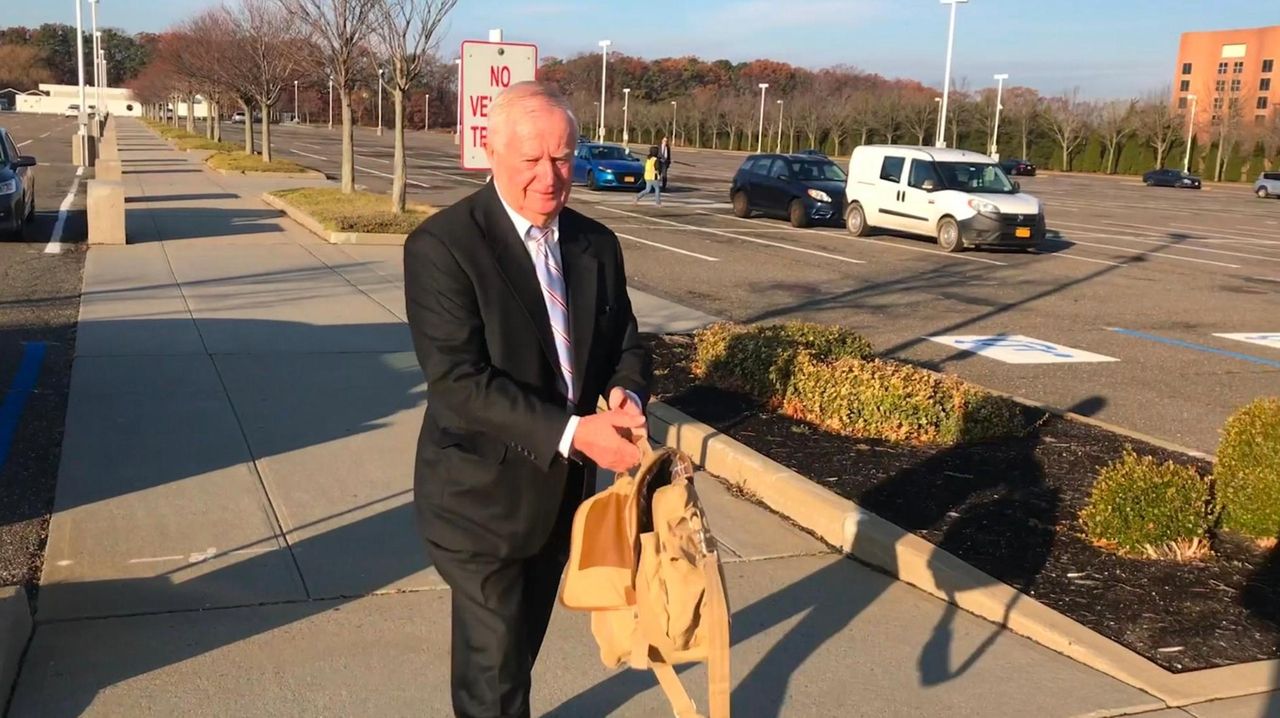 Former Suffolk District Attorney Thomas Spota said he had a "queasy" feeling when he recalled a comment ex-Police Chief James Burke made about a detective who has since admitted to covering up Burke's prisoner beating, Spota's ex-chief deputy testified Thursday.

Emily Constant's testimony in U.S. District Court came in her second day on the witness stand under government subpoena during the fourth week of her former boss' obstruction trial.

The retired Suffolk prosecutor said she and Spota were speaking in her office in winter 2016, following Burke's December 2015 arrest, when Spota brought up something Burke had told him about James Hickey — then newly retired from his lieutenant's job.

"Mr. Spota told me Burke had said to him 'I hope he holds up,'" Constant said, referencing what she said were "a couple of strange incidents" involving Hickey the previous October.

She added: "Mr. Spota said he started to get what he called a queasy feeling in his stomach after what Burke said to him."

The government cooperator has testified his mission was to make sure the three detectives in his unit who took part in the December 2012 beating of prisoner Christopher Loeb with Burke stayed silent as part of a cover-up attempt that involved Spota and McPartland. Burke was Spota's former chief investigator and protege.

The defense has portrayed Hickey as an alcoholic with a history of mental problems who admitted to previously lying in court.

Hickey testified he was hospitalized twice in two years after what he called constant pressure to keep the cover-up effort going, including in October 2015 after what one of his doctors told jurors were hallucinations brought on by stress and sleep deprivation.

Spota and McPartland are standing trial after prosecutors say they were part of a yearslong conspiracy aimed at concealing Burke's beating of Loeb at the Fourth Precinct station hours after Loeb stole a duffel bag from Burke's police vehicle.

Burke pleaded guilty in early 2016 to charges connected to assaulting Loeb and trying to cover it up. He served most of a 46-month prison sentence before his release to home confinement last year.

Spota and McPartland say they couldn't have been part of trying to conceal Burke's actions because he never admitted his guilt to them.

The witness seemed to want to portray herself as a neutral player, although she has said she does not want to see her old boss or McPartland convicted. She also acknowledged she took part in a meeting at her house about the Loeb case after it was transferred to a special prosecutor.

She said during a cross-examination that she had met an equal number of times with the government and the defense before the trial.

Constant, who took over after Spota's resignation before the election of a new district attorney, also confirmed she hadn't asked for immunity, a cooperation deal or exercised her right against self-incrimination on the witness stand.

"They told me I had done nothing wrong," Constant told McPartland's attorney, Larry Krantz, while speaking of federal officials.

Assistant U.S. Attorney Justina Geraci asked Constant on Thursday why she and Spota didn't question Burke's alarm in mid-2015 after hearing that an attorney for one of Hickey's detectives had been approached by a federal prosecutor.

Constant said she was operating under the assumption that Burke was innocent of the assault allegations.

"Every time we spoke to him about it he insisted he did not do it. He was adamant that he never did anything wrong, that he never touched Christopher Loeb. That was the assumption," she said.

But Geraci pressed Constant about why she and Spota didn't ask Burke why a detective's cooperation with federal officials would be so upsetting to him.

"It didn't occur to me to ask," Constant replied. "He had been so adamant and had been so for years."

The witness said she would have told Burke "to turn himself in" if he admitted to the beating, and would "absolutely not" have advised Burke to cover it up.

Constant on Thursday also provided more detail about a 2015 meeting at her home after Burke stepped down as police chief, and Burke's claim then that County Executive Steve Bellone somehow knew Burke was going to be arrested for beating a prisoner.

Constant said Spota, Burke and McPartland came to her Port Jefferson home for the meeting on Oct. 28, 2015. She said it was held there at her suggestion because "the press would not think of going to my house."

The foursome puzzled over where Bellone had gotten his information after Burke said Bellone told him with certainty when he fired Burke that he knew Burke had assaulted Loeb and was going to be arrested and prosecuted, Constant recalled.

The witness said they discussed theories about whether the information could have come from former police detective Robert Trotta, or a former federal prosecutor now on Bellone's staff, or perhaps someone in Hickey's unit who got a federal subpoena.

Constant said Wednesday while testifying about the same meeting that Burke was crying and insisting he was being targeted and hadn't done anything wrong.

She also testified Wednesday about being present at a different meeting at Spota's home after federal subpoenas went out in June 2013 in connection with the Loeb case.

Constant said Burke, McPartland and William Madigan, then chief of detectives, gathered at the district attorney's Mount Sinai residence after Burke returned from a fishing trip. She said Burke was distressed — even crying — about the FBI probe.

But prosecutor Nicole Boeckmann pressed Constant on Thursday about why such a meeting was held at Spota's home on a work day about a case the office was no longer prosecuting.

She suggested the meeting could have been held at the district attorney's Hauppauge or Riverhead offices, or police headquarters in Yaphank.

Constant said the group gathered at Spota's home as a matter of convenience because Burke was driving west from Orient Point.

Boeckmann then asked if it was correct that at that point the Suffolk district attorney's office already had been disqualifed from the Loeb case and a special prosecutor appointed.

On Thursday, the witness also testified about a separate meeting she had with Spota and McPartland on the day after Burke's arrest. She said the three of them were surprised Burke was remanded without bail.

At the meeting, Spota asked Constant and McPartland if they'd ever met alone with Burke and Hickey, the witness recalled.

Constant told Spota that she had not.

But McPartland confirmed he had done so twice, including once at a Smithtown church where Hickey and Burke asked him about witness protection and who was eligible for such a program, Constant testified.

She also said McPartland recalled that during a second meeting he had with Burke and Hickey, they asked him questions about getting federal grand jury immunity.

Constant later told Spota's attorney, Alan Vinegrad, during a cross-examination that Spota had asked McPartland why he had met with Burke and Hickey and McPartland said it was at Burke's request.

"He appeared to be distressed," Constant replied.

The witness also told Vinegrad she "once admired" Burke, but started to have suspicions about him after he was fired and had "already changed" her opinion of him by the time he pleaded guilty.

She revealed during questioning by Krantz, McPartland's attorney, that she had met with both the prosecution and the defense three times before the trial.

Constant agreed with Krantz's suggestion that she was trying to be "even-handed."

The witness also spoke of a $4,000 loan she gave McPartland in February 2016 to help him pay for a lawyer after he found out he was under investigation. She agreed McPartland had asked her for more, and said while she didn't have more to give him, she told him to "tear up the promissory note."

Constant agreed McPartland, who worked his last day in the office in mid-November 2017, didn't have much choice but to resign after he and Spota were indicted a month earlier.

Spota announced his resignation less than a day after the indictment became public.

"The whole situation was very traumatic for everybody who was in the Suffolk County District Attorney's Office," Constant said.

Power on Trial: Burke cried at Spota's home, witness saysEmily Constant, Spota's former second in command, testified Wednesday. Spota's obstruction trial: How we got hereFollow Newsday's coverage from the beginning of the case against Thomas Spota.