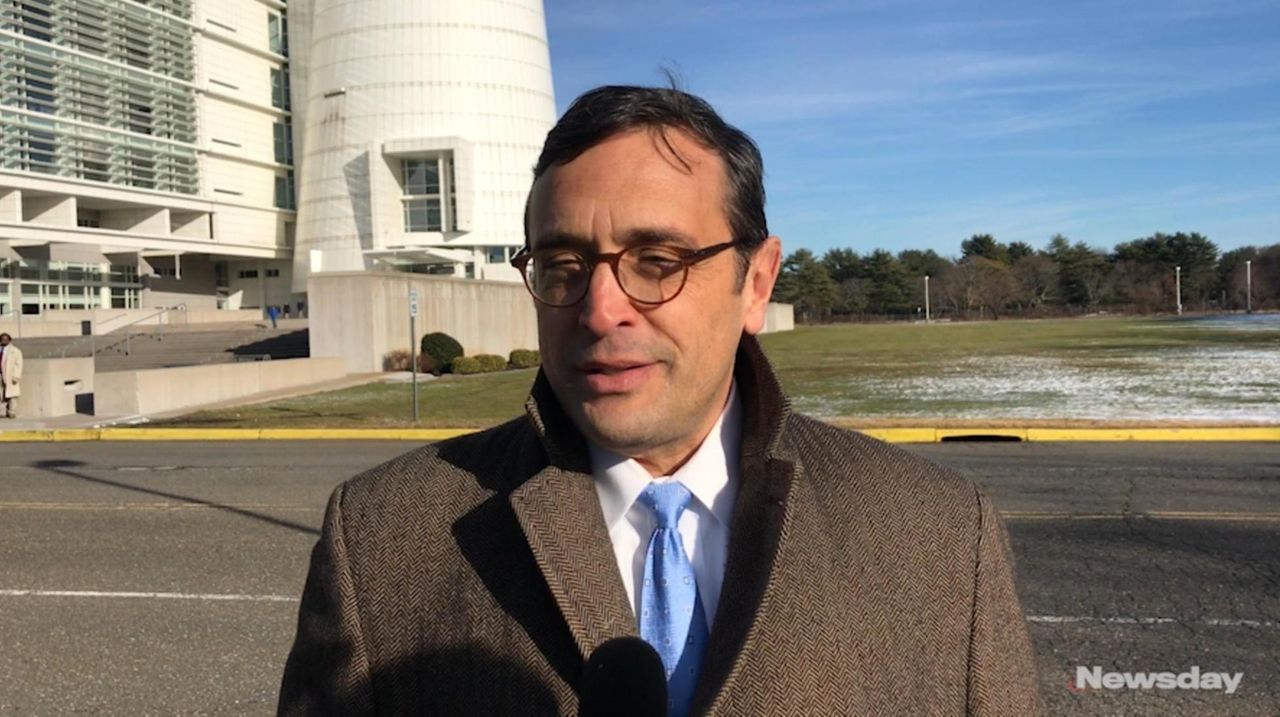 This story was reported by Nicole Fuller, Robert E. Kessler and Bridget Murphy. It was written by Murphy.

Federal prosecutors are asking jurors to convict former Suffolk District Attorney Thomas Spota of scheming to conceal a police chief's prisoner beating after a case built merely on "guilt by association," and have no credible evidence he acted corruptly, his lawyer said Thursday.

Attorney Alan Vinegrad also told jurors in Spota's federal obstruction trial that his client had a "track record of doing the right thing" when it came to the 2012 larceny case of police brutality victim Christopher Loeb.

"He had his chance to just sweep this under the rug, right in the palm of his hand. He did the exact opposite," Vinegrad said in his closing statement, citing Spota's decision to seek a special prosecutor for Loeb's case.

Spota even told the prosecutor in his office who initially handled the Loeb matter and knew of the beating allegations involving then-Police Chief James Burke to brief the Queens district attorney's office — which took over the case, the lawyer said.

"This is a cover-up? This is obstruction? Nonsense!" Vinegrad insisted in U.S. District Court in Central Islip.

He added that there was no evidence Spota ever saw the affidavit connected to his office's request for a special prosecutor, which the government said characterized Burke as a crime victim and didn't mention anything about the beating allegations.

The district attorney, Vinegrad said, "relied on his subordinates" to handle the affidavit.

The Manhattan defense attorney portrayed Burke, who in February 2016 pleaded guilty to beating Loeb in a Hauppauge precinct and trying to cover it up, as Spota's "professional child of sorts."

At the same time, he depicted Spota as a wise elder who told a golf buddy after Burke's guilty plea that he shouldn't sympathize with the wayward cop because "he had no business going to the precinct" and "did it to himself."

Spota and Christopher McPartland, Spota's former anti-corruption unit chief, have pleaded not guilty to charges of conspiracy, obstruction of justice, witness tampering and acting as accessories to the deprivation of Loeb's civil rights.

Spota, 78, of Mount Sinai, and McPartland, 54, of Northport, say there is no way they tried to hide Burke's role in Loeb's beating on Dec. 14, 2012, because Burke never confessed to them before admitting his guilt in federal court.

Vinegrad said Spota "had every reason to believe Jimmy Burke's claims were true" when Burke denied assaulting Loeb and suggested federal officials wanted "revenge" against him after he took Suffolk detectives off a federal gang task force.

He said the allegation that Burke beat Loeb “seemed unbelievable at the time” because Loeb had a long rap sheet, was on drugs and it seemed incredible that a chief would go into a police precinct “in broad daylight” with lots of potential witnesses and assault a prisoner.

“None of them could believe that this crazy allegation actually happened,” he said.

But on Wednesday, assistant U.S. Attorney Lara Treinis Gatz told jurors in her closing argument that the defendants abused their power and broke the law they swore to uphold to protect Burke, a member of their inner circle.

She portrayed Spota as the "CEO or president of the conspiracy," and said he enlisted his right-hand man McPartland as the "chief operating officer" in a three-year cover-up effort bent on shielding Spota's protégé from prosecution.

Treinis Gatz tried to demonstrate the bond between Spota and Burke by recalling that Burke was the star teenage witness in a murder trial Spota prosecuted four decades ago.

She also pointed out that Spota later served as Burke's lawyer when he got into internal affairs trouble as a Suffolk cop in the early 1990s. Spota also defended Burke when a 2011 anonymous letter cited that same trouble and warned Steve Bellone, then county executive-elect, not to make him chief, the prosecutor said.

After becoming chief, Burke — who was Spota's chief investigator before that — joined Spota and McPartland to become one of "the three most powerful men in Suffolk County," Treinis Gatz added.

The prosecutor said the attempt to conceal Burke's crimes was an effort "to protect their fiefdom" after a federal probe into Loeb's allegations "threatened to destroy all they had worked for and accomplished."

But Vinegrad said Thursday there was no "credible, reliable, quality evidence" that Spota "actually took action with illegal intent and corruption as its goal."

The statement echoed a similar claim about McPartland during the closing argument Wednesday from his defense attorney, Larry Krantz.

"The government has gotten it wrong," Krantz added, saying the charges had turned McPartland's life "upside down" and forced him to leave a job he loved.

Both defense attorneys assailed the character of the prosecution's star witness, James Hickey. Vinegrad summed up the retired police lieutenant's testimony by saying: "If you're gonna lie, lie big."

Treinis Gatz told the jury Wednesday that Hickey played a "middle management" role in the cover-up attempt by working to silence the three detectives in his criminal intelligence unit who took part in Loeb's beating at the Fourth Precinct station.

The beating happened hours after Loeb took what prosecutors dubbed Burke's "party bag" from his police vehicle in St. James.

Burke completed most of a 46-month prison sentence before his release to home confinement last year.

Krantz on Wednesday took aim at Hickey by presenting jurors with a list of "10 reasons why James Hickey cannot be believed" that included "raw self-interest," along with a "psychotic break from reality" and committing "perjury" in the past.

Hickey previously told jurors he pleaded guilty in 2016 to taking part in the attempted cover-up and hopes to avoid time behind bars when he is sentenced because of his cooperation with the government.

He was hospitalized in October 2015 after hallucinations brought on by stress and sleep deprivation, after a separate hospitalization in 2013 for pancreatitis after excessive alcohol intake, according to testimony.

Hickey, who retired shortly before his guilty plea, said the stress of the conspiracy sparked both hospitalizations.

The witness said he began drinking while under extreme pressure to keep his detectives quiet, but never consumed alcohol after his 2013 hospital discharge and insisted his memory wasn't compromised by his drinking.

But the defense continued Thursday to portray him as a liar and tried to poke holes in his testimony.

Hickey had offered a damning account of a June 2015 meeting in Spota's office in which he said Spota grilled him on who he believed had "flipped" — or begun cooperating with federal officials — after the civil rights probe into Loeb's case restarted after a 2013 probe fell flat.

But Vinegrad told jurors that Hickey's recall of the event didn't match some of the scant records related to his testimony.

The witness testified that Spota made a call to Burke's attorney about 10 or 15 minutes into the meeting, but phone records show that call was made at 12:54 p.m., Vinegrad added.

He said there's also no record of a call to one lawyer for Suffolk County during the meeting, something Hickey claimed Burke had done.

The defense attorney then pointed to a stipulation — a matter agreed to by the prosecution and defense — that specified that another lawyer and his son, who have the same name, didn't work for the Suffolk at the time of the June 2015 meeting.

But Hickey testified that Spota told Burke at the meeting to call a lawyer by that name, Vinegrad said.

"The government knows that's a problem. ... Hickey's just making it up," he said.

Vinegrad also tried to cast doubt on Hickey's testimony that Spota asked him frequently how his detectives were holding up — what Hickey said was a reference to them staying quiet about Loeb's beating.

Vinegrad said Hickey was "barely ever" in Spota's office building, with card-swipe records showing him entering 21 times from 2012 to 2015, and had lied about having "these conspiratorial conversations" with Spota.

He called Hickey a man "practiced in the art of deception" who perjured himself on the witness stand during burglary case testimony years ago and was also an admitted serial philanderer.

But Assistant U.S. Attorney Nicole Boeckmann responded to Vinegrad's attack on the prosecution's star witness in a rebuttal argument Thursday in which she emphasized that it was the defendants, not the government, who "picked Jim Hickey."

She pointed at the defense table, declaring: "He's their guy. Not my guy ... I'm stuck with the witnesses I get."

Boeckmann said Hickey was open about his personal history, including sometimes humiliating disclosures: “He sat there and he told you in a public courtroom that was full everyday. He described to you every minute and embarrassing detail. Because I submit to you, he was telling you the whole truth."

She said swipe-card records at Spota's office meant nothing, because people also could be buzzed in or punch in a digital code for entry.

"This was a reprehensible crime. ... They were the people charged with making sure justice was served ... and they did just the opposite," Boeckmann said of the defendants.

Vinegrad finished his argument by saying the prosecution "has not even come close" to proving its case.

"Because when you boil it all down and put aside all the mud and the witness with a motive to lie ... the government has nothing to support these charges against Tom Spota," he said.

The trial continues Monday, when jurors are expected to start deliberations.

Spota's obstruction trial: How we got hereFollow Newsday's coverage from the beginning of the case against Thomas Spota. See notable moments from Spota's careerThomas Spota was elected district attorney in 2001 as a corruption fighter. He retired in 2017 after being indicted on federal charges. Here's a look at Spota's career. Spota through the yearsThomas Spota has been serving as Suffolk County's district attorney since he won his first ... Corruption on LI: 10 cases to knowOver the past few years, prosecutors have charged Long Island politicians and public officials with crimes ranging from tax evasion to bribery. Some of these cases resulted in convictions, while others are ongoing. Follow Newsday's latest coverage on the most prominent cases here.