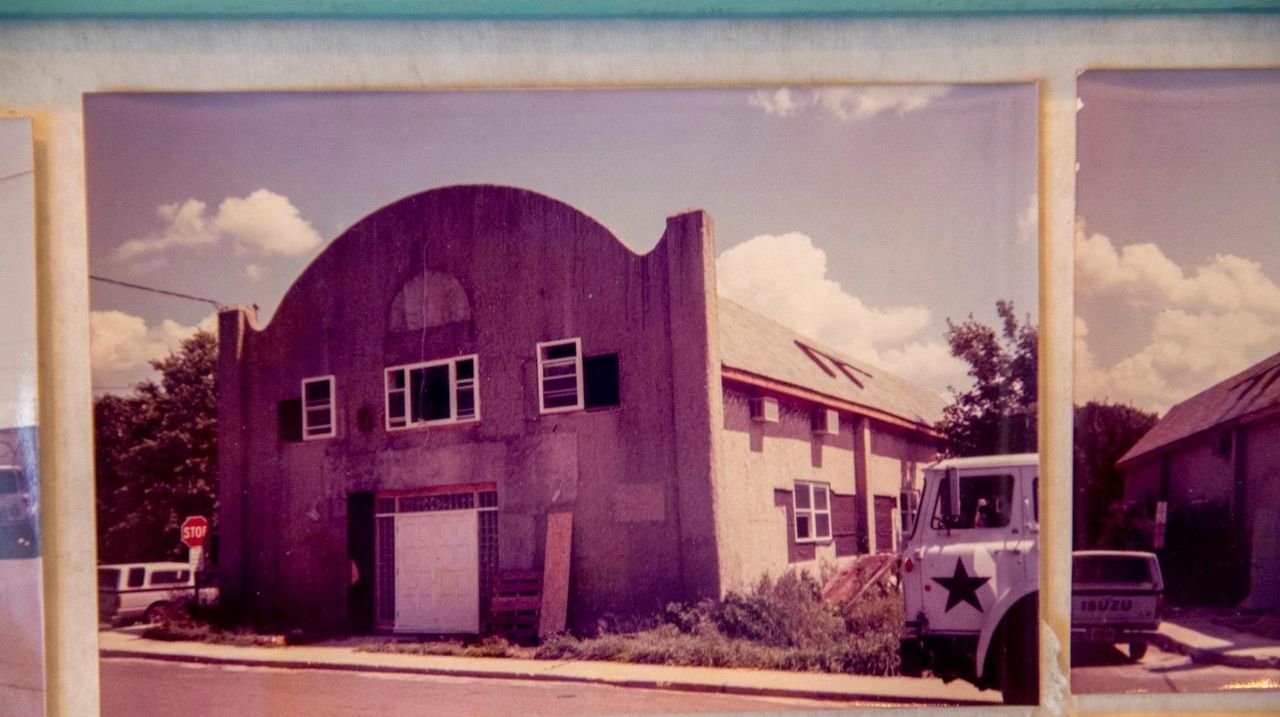 The owner of a former theater in St. James, which dates back to early 20th century, has put the building up for sale. Natalie Weinstein said the pandemic has taken an economic toll on her business.  Credit: Johnny Milano

The owner of a former St. James theater with possible ties to a storied Nassau County movie and stage chain is selling.

Designer Natalie Weinstein, whose main office is on Lake Avenue, bought the Second Street building in 1985 with her husband, Bernard. Amid the fiberglass shavings left by a previous occupant, a hot tub manufacturer, they found a tin ceiling with a fleur-de-lis pattern, a stage and a projectionist’s booth. Stuffed into the booth ceiling they found movie posters for "Edison, The Man," a 1940 biopic of the inventor starring Spencer Tracy, and "Woman of the Year," a 1942 romantic comedy also starring Tracy. Atop both posters is the theater name: Calderone’s St. James.

Posters like those, along with the recollections of hamlet residents, suggest a connection to the Calderone chain that operated at least eight theaters in Nassau between 1916 and the early 1980s. Under Frank Calderone, a medical doctor whose earlier career was running the World Health Organization, the chain opened what Newsday said in 1949 was the largest postwar theater in America, the $2 million, 2,435-seat Calderone Theater in Hempstead. Opening night drew guests including the county executive and the poet Carl Sandburg and coverage lingered over luxurious touches, such as the theater’s marble finishes and "smooth, silent escalator."

The St. James theater, which Weinstein believes started as a vaudeville venue in the 1910s or 1920s before Calderone's involvement, did not get similar attention. No mention appears in Hofstra University theater professor Miriami Tulin’s 1991 monograph about the Calderone chain. A 1989 Newsday story reported that the theaters were no longer in existence under the Calderone name, listing former Nassau locations but none in Suffolk.

"It opened literally days before the Great Depression began and was probably never very successful or a big part of their operations," said Geoffrey Fleming, Huntington Museum of Art executive director and author of "St. James," a 2006 history of the hamlet.

Weinstein, 78, now houses her furniture and decor shop, Uniquely Natalie, on the building’s first floor, and Celebrate St. James, a nonprofit art group she leads, on the second, along with a small museum dedicated to the hamlet’s history as a summer colony for Broadway stars a century ago.

COVID-19 cut deeply into the shop’s business, and Weinstein plans to close within months and auction off its stock. She hopes to find an "angel" who will use the building as a performing arts center or community venue to drive revitalization of the hamlet's once-struggling downtown, as happened in Patchogue and Babylon Village.

Eric Neitzel, owner-broker of DeBarbieri Associates, a St. James real estate company not involved in the sale, said Weinstein faced a difficult market. "There are a lot of people with buildings that are looking for angels," and anyone opening a performance space would have to renovate. But the pandemic's end and sewers planned for downtown could dramatically improve the outlook, he said.

Neitzel said his mother, Florence DeBarbieri Neitzel, who died five years ago at the age of 90, told him about the building: She'd watched movies and plays there as a girl.