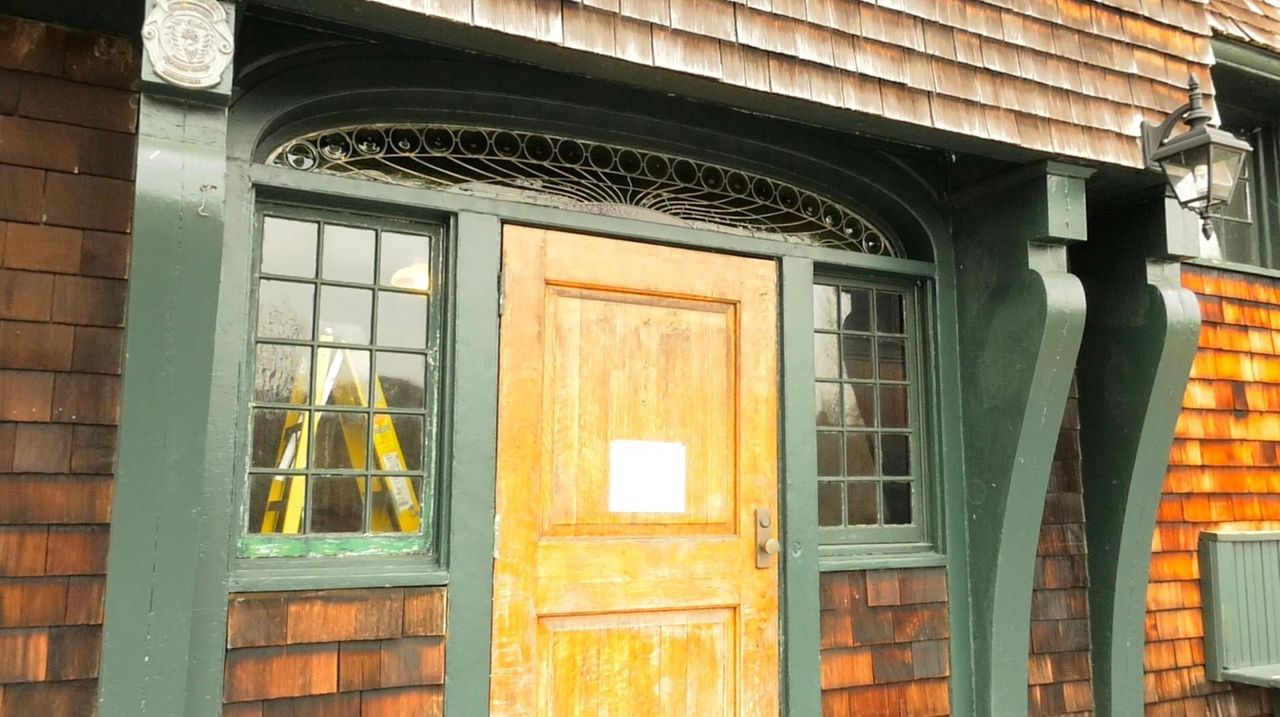 A stained-glass window that dates back to the late 19th century has been restored and reinstalled at Connetquot River State Park Preserve.  Credit: Newsday / John Paraskevas

To some admirers, the design of the narrow, more than 8-foot-long window salutes the outdoor pursuits of the plutocrats and presidents who fished and hunted for more than a century at the park's predecessor, the Southside Sportsmen's Club, after its 1866 opening.

"It's a beautiful piece done in green glass which simulates fish scales … which is perfect for a hunting and fishing lodge," said Richard Remmer, a board member of the Friends of Connetquot River State Park Preserve. The nonprofit and the Robert David Lion Gardiner Foundation footed the bill for the $7,000 restoration. It is one of several major projects the Friends group has undertaken, from reopening the fish hatchery to most recently returning the grist mill to its past glory.

In pondering a fishing theme for the window, Remmer referred to the row of rondelles, flattish discs spun and blown from molten sand. Set in a new lead framework with some extra supports and newly blown glass pieces, the rondelles form the outer border. Beneath them a band of pink- or peach-colored glass resembles a sunset, said the conservators, Alyssa Feihel and Nancy Nicholson, of Brooklyn's Clerkin Higgins Stained Glass.

“It’s a sweet window,” said Feihel, who spent four to six weeks restoring it with Nicholson.

One of the piece’s unusual features is the combination of rondelles and the Victorian machine-wheeled glass that forms the sunset — or possibly a sunrise — on the bottom border, her colleague said. Until the Victorian era, glass was almost always blown; rolling it instead between cylinders lowered the price, allowing many more people to afford windows, glasses and lamps.

The Connetquot window's creator might never be known. There is no paper trail, as Remmer noted; some late-19th-century deals were sealed with just a handshake.

There is an intriguing possibility: Louis Comfort Tiffany, whose father founded the eponymous jewelry store -- and who was renowned for his Art Nouveau stained-glass windows, lamps, jewelry, textiles, pottery, interiors and metalwork, from gates to railings -- belonged to the club when the window was installed around 130 years ago.

Tiffany's summer retreat, Laurelton Hall, set on 1,500 acres in the Town of Oyster Bay, was about 35 miles east of his Manhattan studio. The Sportsmen's Club, acquired by the state in 1973, lies another 30 or so miles farther east. Tiffany built his North Shore palace in the Art Nouveau style that — like the Connetquot window — often featured linear or geometric shapes, sometimes based on plants or even insects. In Paris, the Eiffel Tower and the 1900-era subway entrances are examples.

"It's hard to imagine someone with his artistic ability and … [expertise] in stained glass would not have had something to do with manufacturing and producing this stained glass," Remmer said.

The counter to that provenance is the window's slight asymmetry. As Nicholson put it, "It's kind of wonky" — for example, all of the lead stems are not perfect twins.

Tiffany was nothing if not exacting; historians say he was known to destroy pieces with flaws.

"It doesn't look like a Tiffany window," Nicholson said. "It means, I suppose, he could have designed it," she said, while a local artisan might have made it.

The two conservators removed the window last September. A strip of plexiglass shielded the entryway until they reinstalled the window on Wednesday, a process that required a number of fine and careful adjustments.

Ginny Fields, chairwoman of the Friends group, is planning more upgrades, including transforming the barn into an educational-environmental center, and renovating the billiards room as well as the ice house that once kept game and other foods cold — and provided ice cubes for club members’ cocktails.